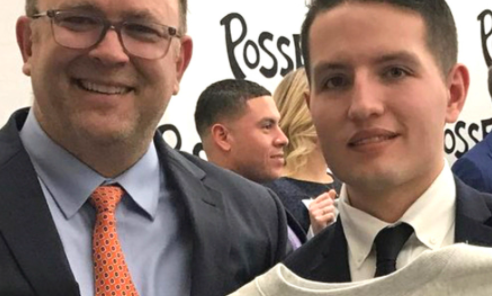 UVA Posse Veterans Scholar Connor Burns has met extraordinary personal and academic goals this year, having been admitted to UVA’s prestigious McIntire School of Commerce and completing an ambitious fundraiser to benefit the Make-A-Wish Foundation. He says the latter, a solo “4x4x48” running challenge, also served to hone his academic focus.

Burns trained extensively to ready himself for the 4x4x48, which amounted to running four miles every four hours for 48 hours this past January. Though he has run marathons in the past, the Marine Corps veteran says this challenge required a new level of dedication.

Burns was inspired by ultra-runner David Goggins and his own personal experience of seeing his best friend’s sister granted a wish.

“Seeing the boost of hope that the whole family got is something I will never forget,” Burns says.

In addition to the physical and emotional rigor of the 4x4x48, Burns found that training gave him a drive that extended into the classroom. When Burns applied to Posse, he knew he wanted to major in UVA’s McIntire School of Commerce, but acknowledged he would have to surpass his previous academic performance to have a shot. While training for the run, Burns discovered that “finishing four miles could fuel me to study four hours.”

The Posse Veterans Program played a role in boosting his morale, too, he says.

“Posse brought my confidence back,” he says. “My mentor Dave Sauerwein’s devotion to be there for our Posse gave me the drive I needed to change my life. One outlet I chose was running.”

That same drive also led to success in his schoolwork. This semester he secured a coveted spot in the B.S. in Commerce Program, which boasts an impressive 3.71 average GPA among its cohort. He knows he will continue rise to the program’s challenges as a student, with his Posse by his side.

“The Posse Foundation’s constant support for [Scholars’] personal growth never fails to amaze me,” Burns says. “We often emphasize academic success, but members of the community are also a dedicated resource for encouragement.”

This article was originally published in spring 2021 by the Posse Foundation.