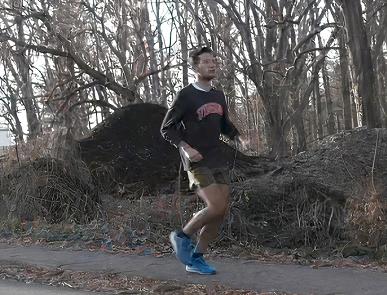 A little over a year ago, Connor Burns says he was in the worst shape of his life.

The former Marine felt that he had let himself go both physically and mentally. Staring at an old pair of Nikes, he realized he needed to make a change.

Burns can’t remember exactly how he discovered ultramarathoner and retired Navy SEAL David Goggins, but the inspirational figure helped him come around.

“It changed everything,” he says. “I started obsessing over his mentality. David has a saying: ‘Find who you are, and own it.’ I brought that with me on every run.”

But after seeing a Make-A-Wish Foundation advertisement about a young boy fighting cancer, the idea of undertaking such a grueling running task suddenly took on new meaning.

“The boy had the biggest smile on his face, and he was ready to beat his illness with every fiber in his body. Any kid who has to go through something like that will always be tougher than I am. Make-A-Wish rewards bravery, simply put. That’s when a lightbulb went on in my head: ‘Oh, maybe I can use this challenge as a way to raise funds for amazing kids like this.’”

That’s exactly what Burns did, turning the 4x4x48 challenge into a fundraiser for the Make-A-Wish Foundation of Greater Virginia.

Ready Player One
Though he had a history approaching taxing challenges as a former member of the military, the looming two-day run was daunting; he would have to complete the same distance that he would normally allow himself to accomplish in a regular routine that spread over a six-day span.

“It’s a lot easier to not tax your body or your mind when there isn’t a staff sergeant yelling at you at 4 o’clock in the morning while you’re running 5 miles with 60 pounds worth of gear on your body. When I left the Marine Corps, I was focused on the mindset of what I accomplished in the past. Sure, all the runs, hikes, and other difficult challenges are amusing to look back on and can bring inspiration, but at the end of the day, to grow, I realized that I need to constantly challenge my future self,” he admits.

Burns views the act of fostering mental toughness as an exercise that must be revisited throughout our lives, comparing it to being a doctor, lawyer, or teacher required to recertify their credentials on an annual basis. He believes that attempting the uncomfortable allows for true personal growth, as an element of suffering can extend to academic and personal endeavors alike.

As he readied himself with careful running practice, he was also buoyed by Professor Christina Black’s lessons about the power of self-affirmations to recognize his own hard work; he remained positive, offering himself regular support in the mirror.

But preparation for the run itself wasn’t only exacting sessions spent pounding the pavement, nor was it confined to taming negativity in the brain.

“I had a lot of pasta,” he says. “An insane amount. Breakfast, lunch, and dinner I was eating some sort of spaghetti.”

Target Hit and Then Some
Burns set out to run 48 miles over a contiguous 48 hours to raise $500 for the Make-A-Wish Foundation. By mile 44, he was limping along with taped legs. But he finished. And by the next morning, he rose to find himself with swollen ankles and tight hamstrings, and also having raised more than three times his initial goal, finishing with $1,525.

“I fully attribute my success to the UVA community. Time and time again, I always find something special about this place. The community really comes together in such an impactful way,” he says, voicing his appreciation for the opportunity to be at McIntire, thanking his classmates for their immense support for his effort. “If it weren’t for them, I don’t think I would have been on the Charlottesville news.”

Though Burns isn’t entirely sure how Make-A-Wish will use the money, he’s learned that when the organization grants wishes, they have proven to provide physical and emotional benefits capable of giving children with critical illnesses a higher survival rate.

“If the $1,500 will help towards that in any capacity, I consider that a mission accomplished,” he says.

While Burns is grateful for the Charlottesville community rallying behind his one-man fundraiser, he hopes that he might be able to build on the idea of involving more people who could be interested in participating in similar charity-driven runs. He’s convinced that any short-term pain stands to be long outlived by the memories of meeting a challenge like the 4x4x48—or some iteration of it—that people can share with their friends.

“There’s something special about honoring the struggle, especially when it’s over,” Burns says. “I’m going to take the next couple of days off, but should be back running through Grounds by the end of this week.”

If ever there was proof that physical pain is often temporary, while the inspiration to improve ourselves persists, look no further than this Comm student—a success by any measure.