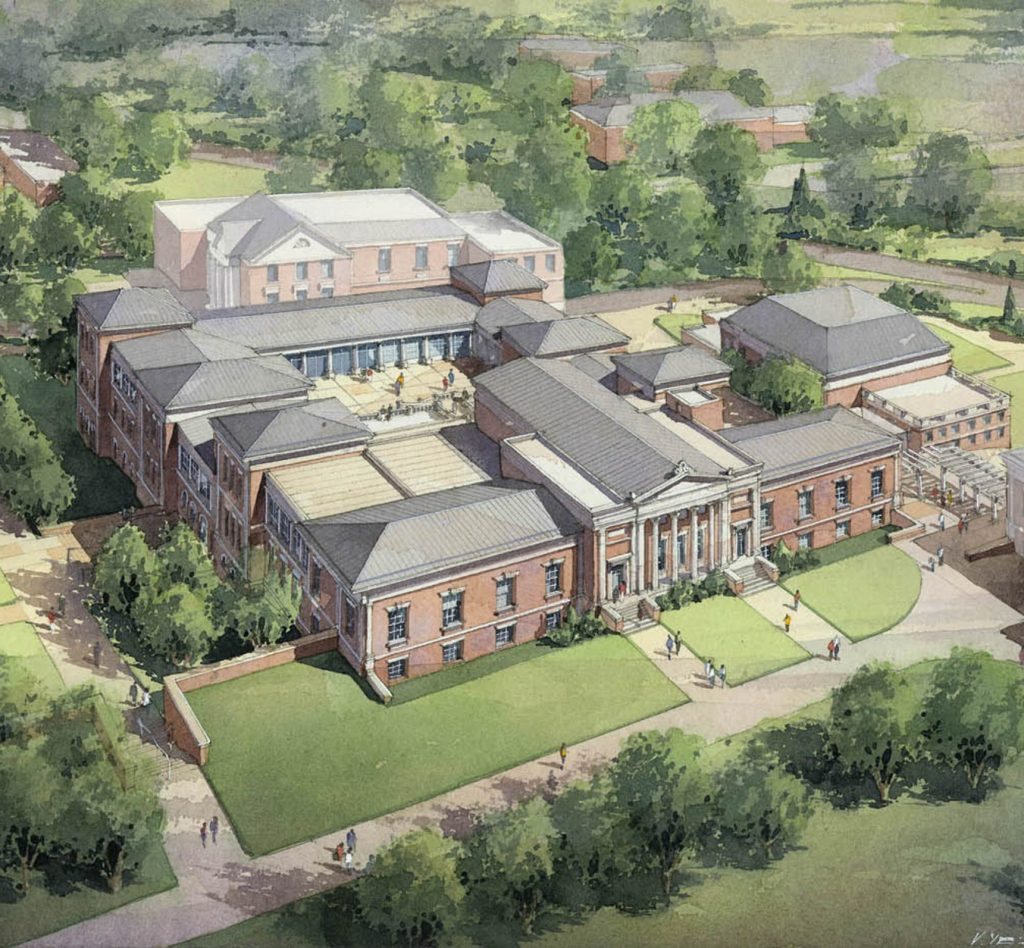 2002
Commerce School announces plans to move Back to the Lawn

The Commerce School announced its plan to return to the Lawn in 2002. McIntire initially hoped to expand Monroe Hall, but the site proved inadequate to support the School’s programs. Then UVA President John Casteen lauded the initiative, saying the plan would “allow the College and the Commerce School to strengthen the academic and programmatic links between them and to better serve their undergraduate and graduate students.” Calling it an “exciting new model of education,” Casteen added that the joint venture by Dean Zeithaml and College Dean Ed Ayers “reflects ongoing University-wide discussions that encourage interdisciplinary initiatives and forward thinking.”

"McIntire Returns to the Lawn," from McIntire Exchange, spring 2002

University President John T. Casteen III announced April 4 what he called an unprecedented collaborative venture between the College of Arts & Sciences and the McIntire School of Commerce that will result in 100,000 square feet of additional academic space and the creation of interdisciplinary courses and programs.

For the past six months, Edward L. Ayers, Dean of the College, and Carl P. Zeithaml, Dean of the McIntire School, have been hammering out the details of a plan that will include trading spaces, sharing spaces, and building new ones. In the end, each school benefits from an increased physical plant.

“More important,” Casteen said, “the plan will allow the College and the Commerce School to strengthen the academic and programmatic links between them and to better serve their undergraduate and graduate students.

“I applaud the vision of our deans, Carl Zeithaml and Ed Ayers, to create this exciting new model of education,” he added. “Their joint venture reflects ongoing University-wide discussions that encourage interdisciplinary initiatives and forward thinking. Their work—and their spirit of cooperation—may well become a leading example for the rest of the University to follow.”

McIntire intends to construct a 100,000-square-foot building at the far southeast end of the Lawn. It will front on Hospital Drive and be bordered by Randall and Wilson halls. It will connect to Rouss Hall—McIntire’s earlier home—which will be shared with the College as the primary location of their collaborative programs. McIntire will integrate Rouss into its new complex and assume its renovation and maintenance responsibilities. The College will expand into Monroe Hall, McIntire’s home for the past 27 years.

“Over the long term, this collaboration promises to transform the experience of students and faculty in both the McIntire School and the College of Arts & Sciences,” Zeithaml said. “We intend to create an inspirational physical presence and to facilitate innovation and collaboration among the faculty and students of McIntire and the College. Both the building and the programs will provide students with the best education possible and support the faculty’s outstanding teaching and research activities.”

He added that it is essential that McIntire maintains its sense of place on Central Grounds and that the School continues to incorporate state-of-the art technologies into any new buildings.

“We also must make it easy for students to take classes across departments within the University,” Zeithaml said. “This exciting new series of initiatives ensures that McIntire and the University will continue to build on a foundation of excellence and innovation.”

Zeithaml added that he was pleased to announce a $500,000 gift from alum John Griffin (McIntire ’85), Founder and President of Blue Ridge Capital, to fund development of several interdisciplinary initiatives. Griffin’s support reinforces his initial investment in a fund designed to support faculty efforts to create collaborative ventures.

“The increased integration of the McIntire School into the University community is a win-win proposition,” Griffin said. “Only good things can come from College and Commerce students and faculty learning from each other.”

The College and Commerce School faculty are exploring several collaborative initiatives including:

• An introduction to business course. This course will center on a multipart business case study about the development of a growth enterprise. It will be open to College students interested in a broad introduction to and understanding of business concepts and functions and may serve as a prerequisite for admission to the McIntire School.

• Expanded enrollment in the McIntire Business Institute and the Summer Finance Institute. This year, the McIntire School’s summer certificate programs will be open to rising fourth-year students. If successful, admission may expand to include rising third-year students. Winter break sessions also are under consideration.

• An interdisciplinary minor in the College. Depending on the availability of long-term faculty and other resources, the schools will work together to develop a minor in liberal arts and business management. This minor, to be offered by the College, would draw on a combination of McIntire School courses and such College disciplines as psychology, international relations, media studies, and economics.

These course offerings and programs will create more opportunities for College students to take business-oriented courses, Ayers said. The arrangement is expected to lift some of the enrollment burden in the College’s Department of Economics, which has one of the highest levels of undergraduate student demand in the College.

“As undergraduates have come to believe that business courses are key to landing good jobs in recent years, interest in Commerce and Economics has surged,” he said. “We believe that students who seek some practical business training to round out their liberal arts education will find the addition of these interdisciplinary courses particularly attractive.”

The additional and shared space will facilitate these programs. The new McIntire School building will enable the School to expand its offices, state-of-the-art classrooms, and already-popular capital markets and financial trading center. Although the School initially hoped to expand Monroe Hall, the site proved inadequate to support its current and new programs. With the new site, McIntire will meet its 125,000-square-foot space requirement, and the College will gain 21,000 more square feet than expected.

The Economics Department, now split between Rouss and Wilson Halls, will occupy space in the new South Lawn complex or another suitable building.

To serve those working in the new South Lawn and Commerce buildings, the College and Commerce will contribute to the construction of a parking structure in the vicinity of Jefferson Park and Brandon avenues. Both schools also are interested in the creation of a student commons area.

McIntire has begun to raise funds for its new building. The College’s South Lawn Project is being funded by a joint effort of the Board of Visitors and the College Foundation.