You’ll Never Believe What Happened Next to Colette LeClair (M.S. in Accounting ’15)

A McIntire education can take you unexpected places. Colette LeClair can tell you all about it.

When she was pursuing her master’s at the Comm School, she was understandably driven by a desire to pass the CPA exams. But her vision for the future during those years was defined by a California move, hopes of securing a job at a large firm, working her way up to Senior Accountant, and holding the position for at least a year. At that point in her career plan, she anticipated taking on a position with one of her clients in their finance or accounting departments—not to suddenly become a full-time fashion blogger specializing in clothes she bought on Amazon.

But that’s exactly what happened.

Change of Plans
Though the Richmond, VA, native followed through on her original relocation plans and landed a job with professional services firm BDO in San Francisco, she was motivated by the idea to start sharing some of her outfit purchases from the e-commerce mega-company. Living in a new city without a car, coupled with long hours in the office, resulted in a spike in online buying. A little more than two months prior to becoming a Senior Accountant, and just a few months past her two-year anniversary of walking the Lawn, LeClair convinced a supportive coworker to take her photos. And just like that, her Colette.Prime blog was up and running.

At that early stage, she couldn’t have predicted the success of her blog and Instagram account (@coletteleclair_), but Amazon reached out with an invitation to its Influencer Program, providing her with the tools to direct her followers to its fashion collections, and from which she collects a commission. The number of her followers swelled into the thousands. A growing number of women connected with LeClair, seeking her guidance, attracted by the looks she models with convincingly professional execution. The creative side hustle was taking more and more hours each day—and she really enjoyed it. The decision was made to leave the firm and concentrate on her nascent business full time.

Having three older sisters and a best friend who all worked in accounting had understandably shaped LeClair’s career trajectory—that is, before she surprisingly jumped into her second occupation, one with which she had no direct connection or history with previously.

“I never viewed myself as someone who could work in fashion, and especially not as someone who could give advice on fashion to others,” she says. “I knew that I was really good at finding stylish outfits on Amazon, but that was because I was a broke college kid who had dedicated four years’ time to Amazon shopping. Unless someone asked about my outfit at a football game, I didn’t talk about it. I never would have guessed that being good at finding clothes online could be considered a job.”

A Voice of Encouragement
Her reputation for knowing her stuff grew to the point that she was featured by Cosmopolitan magazine in April 2019. While LeClair’s determination comes through the pictures she shares, she isn’t motivated by merely portraying herself as a glamorous bargain hunter: She sees her online channels as a conduit for assisting women, engaging with fashion as the common touchstone by which she can improve others’ lives. She says that acting as a voice of encouragement was the sole motivation for why she began blogging about her purchases in the first place. 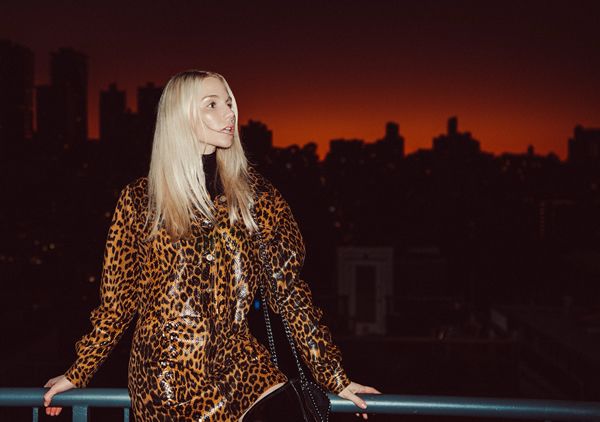 “I only started having an interest in it because I knew my goals from the start: to help girls with their confidence, style, mental health, and well-being and to build a community of support,” she explains. “Fashion blogging was the best way I knew I could communicate and reach girls from all over the world. I was so eager to help and spread a positive message. After years of explaining to my friends that my clothes were from Amazon—and even being asked to send links of my Amazon clothes and make ‘idea lists’ for events like Coachella and holidays—I figured that I should make them available to any girl out there who also wanted fashion help on a budget. I felt confident that girls like me would want help!”

And even though accounting and fashion may seem like they exist on opposite sides of the universe, LeClair insists that if her background hadn’t been in accounting, she wouldn’t be where she is today—thanks in no small part to her Comm School experience.

Lasting Impressions
“McIntire gave me a lot of confidence. It also taught me a lot about managing hard work, having a strong work ethic, and working with diverse groups of people,” she recalls. “A nurturing, supportive environment like UVA is so beneficial for someone who wants to start their own business. I still think of my assignments to this day—specifically having to give a 30-minute presentation about a difficult accounting topic in front of the whole class. It was probably three minutes long, but to me it felt like 30, because I worked so hard on it and I was so scared to talk in front of the class for that long. Now, I talk to thousands of girls in front of the camera every single day.”

Now in the second year of running her thriving online enterprise, LeClair doesn’t plan on tending to her CPA licensure renewal requirements. Yet having passed her CPA exams while simultaneously taking final tests in other McIntire courses still remains a point of pride. She says that the program’s elevated level of academic rigor promoted a communal effort that individual students were committed to shouldering, a responsibility that stays with her today.

“Everything—from the expectations in class, to the time management lessons, to the people—really had an impact on me,” LeClair says. “There’s something really special about being a part of something so supportive and so hard at the same time. Knowing that I could succeed at grad school at McIntire and pass my CPA exams at the same was a definite confidence boost for me. When I started working in public accounting, the amount of work wasn’t surprising to me. Thanks to UVA, I had the confidence and resume to get out to San Francisco and start my own business.”

Accounting for Experience
The matter of recommending clothing to thousands of people, hunting down unique items from deep inside the rabbit hole of Amazon’s seemingly endless offerings, and taking the hours necessary to pose for photos in striking locations and to film clips taking catwalk turns may appear to be as far as possible from the accounting world LeClair left behind. It’s not completely the case, however, as she says her education and career experience taught her valuable lessons that inform the very different job she has today.

“Accounting requires a lot of patience and responsibility, both of which are extremely useful traits,” she says. “I think the most rewarding part of the job was having a very serious role, being part of a company, and knowing how it functions behind the scenes. Accounting shows you how everything works in a business, and if you understand businesses, then you have a superpower.”

Recalling a pair of all-encompassing busy accounting seasons she went through, LeClair explains that the demands of the field had less to do with the heavy workload and more to do with eschewing the outside distractions of being young in a new city: “It might feel like you are the only 22-year-old having to work until 10 p.m. and on the weekends for eight weeks straight.”

She offers context for her decision, citing the reasons she believes others are as committed to such a potentially arduous route. “No one chooses accounting if they want to just sit back and relax in their 20s,” she says. “They choose accounting because they want the challenge and they know that the benefits are worth the work.”

That experience, LeClair says, was important for familiarizing herself with what “real-life hard work” feels like, and she’s thankful for having gone through it, noting that “being uncomfortable becomes comfortable, and soon trying new things doesn’t feel as bad as it did the first time.”

Positively Valuable Exchanges
You might say that aforementioned ethos spurred her on to launch her successful self-run business, a position that she feels privileged to have day in, day out. “You’ll never work as hard as you do when you love what you do.”

Going forward, she remains driven by a singular purpose: to feel like she’s connected with women by helping them with their self-confidence.

“We all have our struggles,” she admits, “but if one girl can think to herself, ‘Colette really helped me today and I feel better,’ then I have achieved what I’ve wanted!”