Decisions and Discoveries with Women’s Business Forum at McIntire

The inclusive student org offers a robust schedule of programming that assists members as they navigate their educational and professional paths.

As such, they both gravitated toward the Women’s Business Forum at McIntire (WBFM).

“I had big dreams of becoming a CEO one day but was discouraged to see that less than 8% of Fortune 500 company CEOs are women,” says Brunner, President of WBFM, revealing how that paltry figure sparked her passion for supporting women interested in business.

Having joined as a member her first year on Grounds, the product of McLean, VA, says that WBFM has given her a platform for creating programs and hosting events that help women gravitating toward likeminded careers. “I’m hopeful that this work will yield more women in my generation excited and prepared to enter the business world and even push that female CEO rate to over 50%—as it should be.”

Redgate, Vice President of the student organization, was particularly drawn to WBFM because she hadn’t yet decided on the industry that most interested her, but realized that many of the other McIntire-affiliated clubs focused on specific areas such as investing or accounting. “I liked that WBFM was broadly focused,” she says, lauding the org’s inclusivity. “It does not require any application or prior knowledge of the business world, which as a first-year I found to be very welcoming.”

A Tradition of Opportunity
Brunner believes that past members contributed to the strength of the org by creating traditions that continue to benefit its members today. WBFM was founded in 2003 with an executive board of five students: President Julia (Thies) Moore (McIntire ’04), Pre-Comm Forum Chair Stephanie Santoso (McIntire ’04), Mentor Chair Shilpee Raina (McIntire ’05), Webmaster Michelle (Chen) Roberts (McIntire ’06), and Treasurer Akosua Baah-Dwomoh (McIntire ’04). The five established a proto-executive board, which would later expand to include 8-10 first- to fourth-year students. 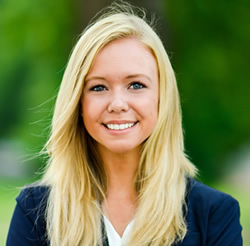 “We are able to use and build upon the framework that was laid out from the first Annual Networking Banquet, WBFM’s largest annual event, typically hosted at the Graduate Hotel. It gives all of our members the opportunity to network with professional women from a variety of firms, providing an experience that allows them to learn about a variety of business fields,” Brunner says, noting that the executive board enjoys maintaining the event while adding new aspects to it with each passing year.

Also first established by the inaugural executive group, mentorship remains a program that continues to assist WBFM members as they navigate their educational and professional paths. Brunner explains that younger members are matched with Commerce students who advise on subjects ranging from course selection and McIntire’s application process to internship recruitment and more.

“When I was a first-year, my mentor had an extremely positive impact on my experience at UVA and navigating the recruitment world. I am touched to hear story after story of mentors developing strong relationships with their mentees and giving them the confidence to be successful in the business world,” she says.

“It’s a great opportunity for our members to learn more about business directly from industry professionals. In recent years, WBFM’s corporate relations team has worked extremely hard to develop long-term partnerships with a number of firms and produce fantastic events for our members. We’ve had everything from a ‘Women in Finance Panel with Bank of America’ and ‘Dinner and Networking with CarMax,’ to a ‘Resume Workshop with Baker Tilly Accounting,’” she says.

Outside of what takes place within WBFM, Brunner says that companies have taken notice of factors that have made for the business world’s uneven playing field for women, and have made strides in recent years toward rectifying the issue.

“Almost every major business firm has developed programs for first- and second-year women to learn more about their firm and begin the networking and recruitment process.” Because of the interest and earlier recruiting cycle, WBFM has been sending its members to these types of events on a monthly basis. “Companies are constantly contacting us with new programs they want our members to apply for—all aimed at bringing in and supporting women into the business world. I am extremely happy to witness these changes and know they will positively impact our members’ futures.”

Concerning Redgate and Brunner’s futures, they both credit the group with preparing them for their career plans and imminent placements. Redgate, who will be interning at Guggenheim Partners in New York this summer, found that WBFM was instrumental in her decision to pursue a career in investment banking.

“The club held an internship panel of fourth-year students at the beginning of my second year. A few of the girls explained their internships in investment banking, and their insight was extremely helpful. While recruiting, I was able to apply the knowledge I had gained from the club about resume building, networking, and more,” says the Fairfield, CT, native.

“Similar to Kyla, WBFM allowed me to explore the different areas of business and helped me realize I want a career in finance,” Brunner says, detailing how the org’s activities strengthened her networking skills and readied her for the recruitment process. “Networking with over 20 different professional women during my first year at WBFM’s Annual Networking Banquet was the best networking experience I could’ve asked for and helped me hone my skills for recruitment season.” Like Redgate, she will also spend the summer in New York, interning at Goldman Sachs.

Rising to the Pandemic Challenge
Like the rest of the world, the pandemic forced much of what WBFM does online. The upside to going virtual has been engaging a greater number of companies and speakers.

“Notably, our April meeting will feature a speech and Q&A from McIntire’s Dean Nicole Thorne Jenkins, a privilege that may not have been possible if not for the convenience of Zoom,” says Brunner. “I am beyond excited for our members to listen to and interact with a woman who has accomplished so much and broken through so many barriers.”

Redgate’s role as Vice President obliges her to organize general body meetings, which are virtual as well. She says that last semester’s robust schedule included a Commerce Career Services presentation on networking, a speaking engagement with McIntire Professor Ann Backof, and an internship panel of UVA students. “Although I miss being able to have in-person meetings, Zoom has allowed our club to stay connected,” Redgate says, crediting her involvement in WBFM as an extremely rewarding experience in the face of the pandemic.

“As we all know, COVID-19 has isolated many aspects of our lives. But during our WBFM meetings, I feel connected to women in the UVA community,” she admits. “I really look forward to leading these meetings and providing the members with an hour of their day during which they don’t have to worry about school or the pandemic. Additionally, I receive many emails from members asking for advice. It has felt really good to be able to help these younger students in any way possible, especially because there were so many people who helped me when I was a first- and second-year.”

For Brunner’s part, fully transitioning to a virtual schedule took a great amount of creativity. “The pandemic began right as I assumed the role of President of WBFM. I wasn’t sure if it was going to work out, but after an extremely successful fall semester, we had over 160 women sign up to be spring semester members!” she says, pointing out that many first-years have contacted her with positive responses to WBFM’s support.

While Redgate excitedly reports that the remainder of the spring 2021 semester schedule will continue to offer members engaging meetings via Zoom, Brunner is hopeful that in-person events will resume in the fall.

“If so,” she says optimistically, “we will hold our Annual Networking Banquet. I would like to invite McIntire alumni to come back to Grounds to celebrate the Centennial and be a part of our networking banquet. Being able to meet successful female professionals who went to UVA would be incredibly inspiring for our members.”