A Hard Lesson in Ethics: Weston Smith on the Perils of Accounting Fraud

The former CFO of HealthSouth shared his cautionary tale with McIntire Accounting students and reflected on his role in a $3 billion scandal. 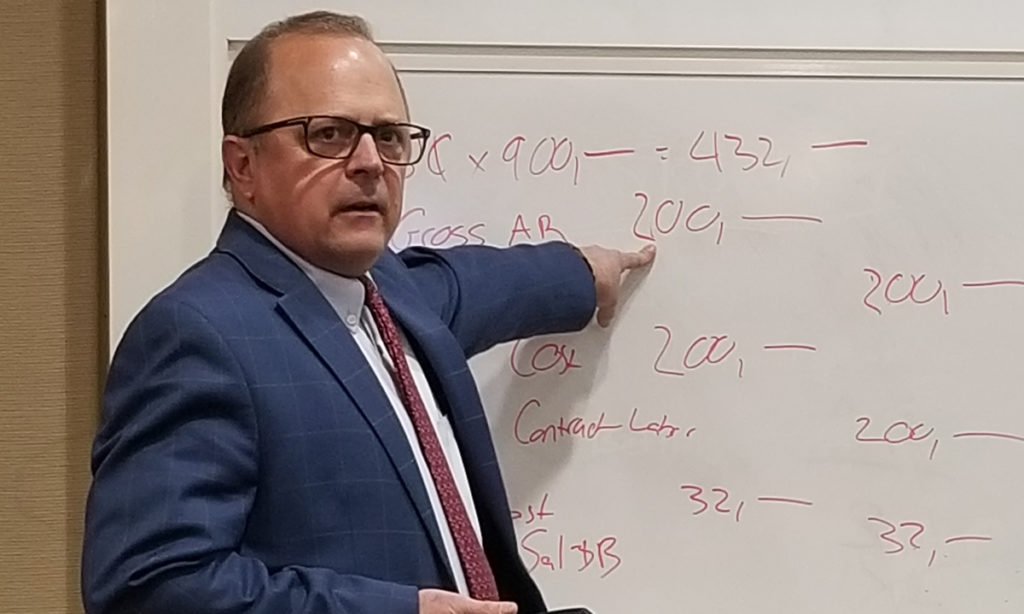 How does a $40,000 shortfall cover-up fester into a $3 billion accounting fraud?

According to Weston Smith, the former CFO of HealthSouth, it comes down to people and their ethics. During a recent talk with students, the McIntire’s PricewaterhouseCoopers Center for Innovation in Professional Services guest speaker explained how instilled beliefs guide individuals’ decisions. Those beliefs also have a direct hand in creating the kind of corporate culture that either allows crimes to be rationalized or puts a quick and decisive stop to any and all illegal behavior.

Many of the traits of loyal employees, he noted, are the very same as those who are often predisposed to committing fraud: non-confrontational team players who are dependable, persistent, thorough, competitive, spontaneous, optimistic, fearless, cooperative, and hard-working.

Smith, too, had displayed these characteristics. Yet despite his part in one of the most massive fraud cases in history, he was quite shocked to find himself contemplating his role in the scheme from a federal prison in late 2005.

From A Life-Changing Low to a Higher Calling
Smith began his talk by passing around a small transistor radio, his only link to the outside world during that trying but crucial incarceration experience. During that humbling time, he was confronted by the truth that all along he hadn’t made the right decisions as he previously believed. And those transgressions designed to help the company meet the expectations of Wall Street were also providing him with financial bonuses and lucrative stock options.

But Smith openly admitted his culpability and made no excuses for his wrongs. By coming clean to the FBI, he initiated a difficult return to credibility, which began by leading an ethical, honest life, and fulfilling his newfound mission to enlighten university and professional audiences about the dangers of fraud.

“My goal is to leave an impression on students and to plant the seed that everyday choices have long-term consequences,” he said.

Smith was also keen to upend the stereotype that these kinds of corporate crimes are perpetuated only by an evil and deviant subset of the business world.

“Based on the comments and emails that I receive from students, I’m optimistic that they see occupational fraud in a whole new light,” he said. “I think they learn that any one of them can slide into fraudulent activity. I dispel the stereotype that all fraud is driven by greed of unsavory characters.”

The Benefits of Cynicism
One major difference that may help continually drive his various points home to students is what Smith perceives as a change in climate, one that has shaped prevailing opinions on corporate employee ethics since the HealthSouth scandal era.

“I think our current trends have created tremendous cynicism in business, politics, and authority. Yet this can be healthy,” he said. “During my time at HealthSouth, many of us were loyal to our bosses and the company—to a fault. A healthy skepticism would have diluted the Kool-Aid that so many of us were drinking!”

Smith added that over the last 15 years, he’s witnessed a real change in corporate culture. “Both at the individual level and through effective corporate compliance initiatives, employees have a louder voice in promoting ethical conduct.”

He insisted that a poor corporate culture will be a detriment to an individual’s career objectives, but with many McIntire Accounting students preparing for successful careers, Smith said they need to be vigilant to make sure they’re signing on to work with an ethical firm before they find themselves in a difficult position.

“Students need to pay attention to the buzz about a company,” Smith remarked. “With the ubiquity of social media and dedicated websites, they have the tools to drill into companies’ cultures long before accepting employment. Don’t be blinded by the promise of a big salary and generous stock options!”

Smith reminded students to consider some tough questions both for contemplating a position and before making any unethical accounting decisions: “What are the real expectations of a firm? Is it worth it?”

A Good Impression about Bad Decisions
“Weston is the only former fraudster I’ve met who comes across as truly sincere,” said McIntire Accounting Professor Eric Negangard. “I’ve known Weston for a while now, and he has always been very open and honest about his involvement at HealthSouth and the incredible damage that he and his colleagues caused. During his recent visit to McIntire, Weston did a fantastic job helping our students understand both the mechanics and magnitude of the fraud, and he gave them a better appreciation for how one small misstep can snowball into an absolute terrifying and highly destructive life-altering event. Weston left our students with a very powerful message, which was his eventual realization that the bad decisions we make ultimately harm the ones we love the most.”

Student Ted Tanous (M.S. in Accounting ’20) echoed the sentiment, noting that he was moved by how genuine Smith came across when reflecting on his role in the scandal, by his candor in acknowledging wrongdoing, and by detailing the many pressures that delayed his alerting the authorities to the fraud.

“What particularly resonated with me was the effect this scheme had on his family,” Tanous said. “Weston said that he wanted to try to scare us: He succeeded. This fraud hurt all those closest to him. He lost not only time with his kids, but also his marriage and his ability to work in his profession. How could he support his family in the future? His situation was a nightmare no one wants to live through.”

Negangard thanks Smith for his visit and PwC for their continued support of the Center for Innovation in Professional Services and for making the event possible.