A longstanding partnership and a highly anticipated annual competitive event warranted extra fanfare Feb. 8, 2019, when the final round of the Ankura-McIntire Case Competition was presented in the Dome Room of the Rotunda. 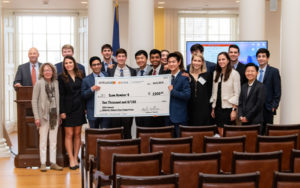 A longstanding partnership and a highly anticipated annual competitive event warranted extra fanfare Feb. 8, 2019, when the final round of the Ankura-McIntire Case Competition was presented in the Dome Room of the Rotunda.

Honoring both the 20th anniversary of the competition and the active relationship between Ankura (formerly Navigant Consulting) and the Commerce School, the top two student teams faced off in the revered UVA space, the culmination of a weeklong event made all the more special by the welcome presence of Jeff Green (McIntire ’88), Senior Managing Director at Ankura and architect of the very first competition two decades ago.

The Consulting Group at McIntire, led by President Kylie Sullivan (McIntire ’19), planned and hosted this year’s event, working with Katie Gaver (McIntire ’12) and Kevin Loeffler (McIntire ’13) of Ankura to make the competition a rewarding experience for everyone involved.

The case in question provided some intrigue: McIntire Professor Cynthia Fraser explained that teams were retained as consultants for the Board of Gotham Hospital to investigate potential diversion of endowment funds and fraud. As the hospital was struggling to cover expenses and malpractice insurance was past due, funds had been diverted from the endowment to cover the difference. Dr. Smith, manager of the endowment and a key suspect, had also directed two confidential contributions from the endowment to a charity linked to his wife and a high school where his son was a football star.

Students received the case from Ankura Consultants Kevin Loeffler (McIntire ’13) and Mallory Leidinger (McIntire ’18) at the kickoff, one week earlier.

Twelve teams of five composed of students from both McIntire and across the University analyzed data and presented their solutions to judges from the McIntire faculty, Professors Brendan Boler and Eric Negangard, and from Ankura, Jeff Green, Marc-Philip Ferzan, Katie Gaver, Henry Holmes (McIntire ’18), Alex Lord (McIntire ’18), and Chris Ring (McIntire ’08).

Honarvar was exhilarated and relieved by the outcome. “Presenting in the Rotunda, as part of the final round, felt like a cinematic ending to my fourth year. Having competed in several other case or stock pitch competitions, I knew this could be a chance to finally win.”

Another McIntire student who knows how it feels to win the competition, Katharina Massenko (McIntire ’20), whose team triumphed in the 2016 edition, reflected on how the event remains a great learning experience for students and served her well as a first-year.

“An important takeaway for me was that effectively working as a group is very important to achieve a great result. I realized that many key points we developed—those that set us apart and led us to take first place—were through discussions with the whole team,” Massenko says. “It is very easy as a group to divide the work according to where each one’s strengths lie, but without bringing all the pieces together by collaborating on strategy, the results of our individual efforts would have lacked significant substance.”

Currently dedicating a year working as an M&A Off-Cycle Analyst at the London office of U.S.-based investment banking firm Baird, Massenko says participating in the competition gives students the experience of presenting to corporate representatives and provides a solid base on which to build their analytical and communication skills in many fields—even those outside of consulting.

“While I have decided to pursue investment banking, I am still using many of the skills I learned from the competition in my current job,” she says.

On the successful completion of the 2019 Ankura-McIntire Case Competition, we spoke with Jeff Green about the continued value of the event and its connection to Ankura’s future.

Having maintained a long partnership with McIntire as both a corporate partner and an alum, what significance does this year’s 20th anniversary of the case competition hold for you?
While our firm’s relationship with McIntire predates the case competition, celebrating the competition’s 20th year is a testament to the longevity and importance of our partnership with the School, and the mutual investment that has been made over a long period of time. McIntire and its graduates have had an important impact on our firm over the years, and we hope that our corporate sponsorship has helped to enrich the experience for the students.

McIntire has been a key source for undergraduate recruits for us for a more than three decades, particularly in our Washington, DC, office. The quality of candidates from McIntire’s programs is consistently exceptional, and year after year, graduates join our team well prepared to jump in have an immediate impact. The School’s alumni have gone on to enjoy great success in our organization, and have been promoted into positions of significant client and firm-wide leadership responsibility. McIntire and its graduates who have joined us over the years have played an important part of the growth and evolution of our firm, and will continue to do so in the years ahead.

As someone who knows what it’s like to be a student at McIntire (and UVA), can you tell us what is it about the competition that continues to make it valuable to current students? Why has it endured?
I have always been amazed at the level of interest and involvement in this annual event, given that participation is voluntary and students are balancing competing academic, extracurricular, and social demands. The McIntire curriculum prepares students exceptionally well to take on business challenges and problem solving in the real world, and the case competition gives them a chance to put the skills they’ve developed to the test—and to do so without guidance from their professors. Participation gives students a taste of a career in consulting and a chance to practice working within a team to conduct research and analysis, solve problems, make recommendations, and present their findings. Plus, the prospect of cash prizes, so close to spring break, seems to keep students interested!

What have been some of the most memorable presentations or editions of the competition throughout the two decades of the event?
When we first launched the case competition two decades ago, we would present the teams with the case materials on Thursday evening, and the teams were required to submit their decks by 8 a.m. the following morning. I was always amazed by the hard work and commitment of the teams, most of whom pulled all-nighters to get their best work done, and somehow were able to remain awake through their presentations. Thankfully, we changed the format over the last few years so that students can avoid the all-nighters (at least we hope).

The case competition is always a memorable event for us and a highlight of our McIntire involvement throughout the year. The overall quality of the presentations is always incredibly impressive, with the teams developing thoughtful, insightful, and creative solutions to the case problems—so it would be hard to single out the most memorable. That said, these cases are based on real client engagements conducted by Ankura professionals, and the top teams are typically developing and delivering client-ready findings and presentations.

The 20th anniversary coincides with Navigant’s change to Ankura. How might the acquisition tie into the future of the case competition? How do you see your company’s partnership with the Comm School evolving?
In August 2018, Ankura purchased the Disputes, Forensics and Legal Technology business segment of Navigant Consulting. This has been a very exciting change for us—with a capital partner aligned with our strategy, and with many great new colleagues, services, and solution offerings for our clients.

As Ankura, our commitment to our partnership with McIntire remains strong. With the firm’s headquarters in Washington, DC, the University will continue to be an important source of future leaders for our business. Looking ahead, we will continue to explore ways to evolve our partnership with McIntire and the Consulting Group to improve the event experience for the students and ensure continued alignment with the focus and interests at McIntire. As an even larger firm of professionals with broader service offerings, we will look for opportunities to introduce case content that exposes students to different areas of our business and the consulting scape beyond the disputes and forensics market.