Breadth vs. Depth: McIntire Professor Tom Bateman Investigates Why Some Researchers Are Inclined to Span Boundaries, Others to Remain within Them 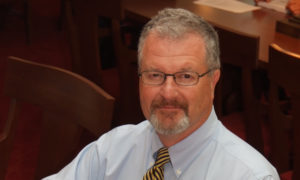 Whether it’s crossing disciplines, breaking down silos, or thinking outside the box, everyone’s talking about boundary spanning as the key to solving the world’s toughest problems.

So why isn’t everyone doing it?

A new study conducted by Tom Bateman, Professor of Management at the McIntire School of Commerce, and Andrew Hess, Assistant Professor of Business Administration at Washington & Lee University, offers some intriguing clues. The study, titled “Different Personal Propensities among Scientists Relate to Deeper vs. Broader Knowledge Contributions,” appeared March 2, 2015, in the prestigious Proceedings of the National Academy of Sciences of the United States of America.

“We wanted to see if we could predict who would do deeper, more specialized work, and who would do broader, boundary-spanning work,” says Bateman, an expert in leadership, motivation, and decision making. “Scientific research is absolutely crucial to the health and well-being of our planet and its people—and if we want to understand how scientific progress occurs, we have to develop a better understanding of why and how researchers pursue their work in the ways that they do.”

Deep Thoughts?
Examining 10-year archival records of research published by some 466 medical researchers, Bateman and Hess first scored each published article according to the depth and breadth of its contribution to existing knowledge. (Conveniently, the digital archive of which they made use indicates key subject terms for every article published, enabling the objective discernment of breadth and depth.) By indexing the scored articles by author, the two were then able to assess each researcher’s publication record according to its breadth and depth.

Next, Bateman and Hess sent questionnaires to the researchers, seeking insight into key work-related behaviors and attitudes. How might factors such as an individual’s professional competitiveness or conscientiousness affect the nature of their research output? What about the individual’s fundamental attitude toward their research, as either an opportunity to learn, or an opportunity to perform? “We were able to relate the researchers’ questionnaire scores to the breadth and depth of their research,” Bateman says. “And the predictors were different for the two different types of research output.”

Attitude Adjustment
Bateman is quick to point out that the researchers’ behaviors are only that—behaviors. “These are not necessarily deeply engrained personality traits, but behavioral workplace styles that can be changed if people decide they want to change them,” he says. “If individual researchers know what their tendencies are, they can start to think strategically about whether they want to strive for greater depth, or greater breadth,” he says. “The same point applies to research teams and research administrators, who can start thinking about how to change goals and approaches to research output.”

Bigger Picture
Moreover, he points out, the researchers’ behavior is occurring within a professional context that overwhelmingly favors specialization. “Most research journals are highly specialized, and most incentive systems reward specialization,” he says, noting a preliminary study that he and Hess conducted in which more than 500 scientific researchers clearly indicated that they regarded engaging in boundary-spanning research as entailing high levels of professional risk and low levels of professional return.

“Certainly, specialization has its distinct merits, and in many instances it may prove to be the most productive mode of work,” Bateman says. “But unless incentive systems change such that they also reward boundary crossing, a few people might drift in that direction, but many will not, because of the way these personal predilections play out within existing systems.”