Since its start 10 years ago, Smart Woman Securities has continued to deliver on its mission, highlighting the promise for women students interested in finance.

Smart Woman Securities (SWS) has been preparing women undergraduate students from across the University for careers in finance since 2011. By providing introductory training and hands-on investing experience, the McIntire-affiliated organization has been empowering women throughout its accomplished 10 years on Grounds with financial education programs and professional networking opportunities.

CEO Claire Duffy (McIntire ’22) says that the group’s openness and accessibility were what drew her to SWS. After completing her probationary seminar and serving on the research team, she was sold.

“I loved the organization’s inclusivity to any female student interested in learning about finance. It was so nice to be able to talk with others and ask for advice about McIntire and investment banking in a warm, accepting environment,” Duffy says. 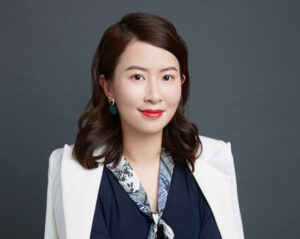 That philosophy was initiated by SWS UVA founder Chuhan Wang (McIntire ’13), who, as a first-year, recalls being shocked by the lack of female representation in other finance clubs. In her second year, Wang, who also served as a portfolio manager for MII, did something about it. She assumed the role of chapter lead, founding the local branch of the nationwide SWS group originally created by two students at Harvard in 2006.

“I felt the urge to start an organization aiming to empower future female investors, and the first mission was to educate and train them,” Wang says, recalling the input of McIntire faculty members who were a “tremendous help” in getting the org off the ground.

She cites Professors Karin Bonding, Adam Koch, David C. Smith, and Robert Webb for their prominent support, as well as essential input from alumni that included Co-Founder and Senior Partner of Sandglass Capital Management Michelle Kelner (McIntire ’93) and John Dickinson (A&S ’99), a Managing Director at Morgan Stanley; both alumni were part of SWS’ inaugural 10-week educational seminar series in the fall of 2011.

The following fall, the group helped its members apply their newfound knowledge to making stock pitches (including an unforgettable first-place win in a national stock pitch competition organized by Fidelity) and getting hands-on investment portfolio management experience. Additionally, members took part in essential mentorship programs to guide them in applying their newfound financial education and preparing for potential careers.

According to the activity that Duffy recently detailed, the successful results of Wang’s early initiatives are still very much thriving today.

Mentorship Makes the Difference
“One of our organization’s core pillars is mentorship, and our SWS alumni lie at the heart of this,” Duffy says, explaining that the mission to empower women to pursue careers in the finance industry relies on the efforts of engaged alumni working with current members. “Most careers in finance require significant networking to receive even an interview, let alone a job offer, so our alumni often act as mentors to current members who are looking to ‘break into’ a firm.”

Mentorship takes many different forms, from alumni contacting individual members and encouraging them to apply to openings at their firms, to hosting organization-wide events, such as the many information and recruiting Q&A sessions held online this semester with Goldman Sachs, Citi’s Sales & Trading Division, and Morgan Stanley’s Fixed Income Sales & Trading, as well as the Barings Speaker Series on investment and asset management.

Duffy credits SWS alumnae with partnering on the events as they look to recruit current SWS members to their firms.

“These are just a couple of examples of countless instances in which our alumni are eager to give back to the organization that helped them land their internship, allowing us to achieve our goal of preparing women to excel in a traditionally male-dominated field at reputable institutions,” Duffy says.

Due to accelerated recruiting timelines for those interested in finance careers, Duffy says the alumni mentorship program now starts earlier on with its newest members. SWS also facilitates peer mentorship within the group, pairing younger members with older student mentors who advise them on class selection, the McIntire application process, internship recruiting, and more.

A Tradition of Success
SWS has successfully fulfilled a need on Grounds, ever since Wang’s founding of the group. She says there was strong interest in the org from the very start, with 80 students chosen from over 100 as official members for the first iteration of SWS. Accolades came quickly as well: The org was named McIntire’s Outstanding Student Organization during Wang’s fourth year, as its impact was far reaching, laying claim to the participation of more than 800 students in the seminars and investment projects held in 2013.

“If you look back at our annual reports from each academic year starting in 2013-2014, you can see that the basic components of SWS are the same: We still have the different groups within the organization (Executive Board, Investment Board, Research Team, probationary members, etc.), and we still research industries, write memos, and execute trades via the McIntire Foundation,” she says.

Scholarly Benefits and Professional Pathways
One area that has seen substantial development concerns corporate sponsorship, as SWS has increased its focus on striving to make professional connections for members.

“Because finance is so difficult to enter without ‘knowing someone’ in the firm—and has only grown more competitive in recent years—we have devoted significant time and effort to forming relationships with companies to create value for our members,” says Duffy.

Indeed, the many previously mentioned recruiting events it hosted this semester are designed to increase the probability that members secure their top job or internship offer.

“SWS is making conscious efforts to ensure our members are just as prepared as those from the other male-dominated investment orgs.”

That preparation is substantial. Duffy’s involvement in the org has enhanced her McIntire experience and assisted her career plans in so many ways that “it’s impossible to keep track of them all.” She says that SWS equipped her with background knowledge on valuation and discounted cash flows that proved useful for keeping up with the swift pace of the Integrated Core Experience’s Finance portion. The org also facilitated essential interactions that would have otherwise been halted by the restrictions of the pandemic.

“Because the Integrated Core Experience was virtual in the fall, I didn’t get a chance to get to know many people outside of my block; however, through SWS, I have been able to meet so many people both in and outside of Comm whom I wouldn’t have met otherwise,” Duffy says, explaining that many of SWS’ Executive Board officers are third-year McIntire students who bonded over their shared academic experiences and uncertainties of the last unprecedented two semesters.

As far as her future career is concerned, SWS greatly aided her during recruiting in the summer before her third year, as she hadn’t yet taken any McIntire Finance courses.

“My education from SWS, namely ‘learning-by-doing’ by writing my own memos, really gave me a solid foundation to work from and allowed me to understand the technical aspects enough to do well in that portion of the interview. Also, I got a lot of questions about SWS, in both behavioral and technical interviews, so it was great to be able to talk about both my technical and personal experiences with the organization. Most of my ‘stories’ actually revolved around my involvement in SWS.” She also credits an SWS alum with helping her land her top internship choice and for introducing her to analysts at the firm where she will be working over the summer. “I’ve said it so many times already, but SWS members are so eager and willing to help other members in any way they can, and this was just another instance of how impactful mentorship can be.”

For SWS founder Wang, creating the chapter was highly impactful on her career, as it prepared her for two finance internships with the mergers and acquisitions team at Bank of America Merrill Lynch, and for joining the technology investment banking team at Morgan Stanley in her first job post-McIntire. During those formative two years at the latter firm, she was part of many high-profile deals, including the IPO of Chinese tech giant Alibaba Group in 2014.

More recently, Wang served as the Head of Capital Markets at her previous company, directing its IPO process together with the CFO; the effort was celebrated by an unforgettable moment, ringing the opening bell on the New York Stock Exchange balcony.

Ready for Challenges
Wang’s SWS experience played an important part in readying her for becoming an entrepreneur later on in her professional life and shows how the work that the org continues to do today demonstrates to women students the potential application of their financial learning across multiple areas of business.

“It feels extremely rewarding to build things that create an impact and make a difference. After investment banking, unlike most of my colleagues who chose to enter private equity, I joined a venture capital firm that invests in early-stage startups to learn more about entrepreneurship,” she says. That led Wang to found her own startup in 2020.

“It was in the middle of the pandemic and extremely challenging to raise funding as a solo female founder, but I still managed to uphold my conviction and won support from some of the best investors and experienced entrepreneurs in the world.”

The coronavirus also presented challenges for SWS, but the org continued undeterred, hosting all of its regular events through Zoom and welcoming its many expert guest speakers to address the group.

“This past fall, we partnered with Bessemer Trust and Goldman Sachs to co-host informational and recruitment events for our members. Despite having to be virtual, these events both had a strong turnout, and we received really great feedback from our members,” Duffy says. “Our 2021 Executive Board may be one of the best SWS has ever seen—every single officer is so passionate about their role and is constantly thinking of new ideas and ways to improve our members’ experience.”

The shared creativity and commitment of those women leading the student org have reinvigorated its youngest members, many of whom have once again become engaged after the unprecedented difficulties of 2020. From Wang’s founding of SWS 10 years ago to the future of the current group, the org continues to deliver on its mission, highlighting the promise for women students interested in finance.