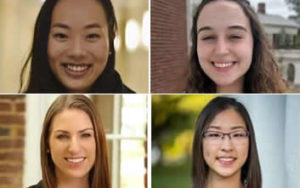 Twelve teams from across the University participated in the competition, which offered the opportunity to practice hands-on strategy consulting and network with current Bain consultants.

This also marks the third year running that women students from McIntire Professor Brendan Boler’s “Consulting” course have placed first in the event.

Yuhas said that Boler’s class provides the fundamentals of data-driven analysis and adds real value to students’ problem-solving skills. “The practice cases we did were extremely helpful in teaching me how to apply those skills to a real situation, and it really paid off,” she noted.

“It’s been extremely rewarding to watch these hardworking and talented women put into action some of the core skills gained from the course and win in this high-stakes case competition each year since its inception,” Boler said, adding that this is the second year in a row that two of the top three teams have been composed of students from the course.

The case competition was presented by the management consulting firm in partnership with the Virginia Consulting Group and Smart Woman Securities at UVA.