John A. Griffin Dean Emeritus Carl Zeithaml is back on Grounds and reunited with his teaching partner Professor Ryan Nelson. Zeithaml, who had Nelson join him in Denmark to co-teach part of his course at McIntire partner school DIS, will now rejoin his longtime colleague in the classroom as they lead the ICE Strategy & Systems course. Having taught together in the class since the launch of the first two ICE blocks in 1999—and continuing for 22 consecutive years through 2020—they will teach the course together for the 23rd time this fall, armed with new perspectives and insights gained from their recent Copenhagen experience.

The Danish Institute for Study Abroad in Copenhagen, Denmark, better known as DIS, has been McIntire’s longest-standing study-abroad partner for many reasons. Perhaps the most compelling is the philosophical commitment McIntire shares with DIS to consistently refresh its courses and find ways to better support those they teach.

In the spring 2022 semester, Management Professor and John A. Griffin Dean Emeritus Carl Zeithaml spent a portion of his post-deanship sabbatical at DIS, collaborating with leadership on curriculum and program innovations while teaching a course he created—a class that included, among other highlights, taking advantage of the European city and a co-teaching stint with Comm School colleague Professor Ryan Nelson.

With travel restrictions keeping the majority of learning local in 2020 and 2021, Zeithaml noted that the extensive pandemic precautions he saw upon his arrival in Copenhagen at the start of 2022 quickly fell away by the first day of February, when Denmark dropped its restrictions. While those changes brought about a return to normalcy in many ways, he says they also caused him and virtually all his colleagues to test positive for COVID-19—albeit with very mild, brief cases.

But what Zeithaml found to be more essential to the success of the semester were the substantive changes taking place at DIS since he had last visited: an overhaul of its facilities and student academic experience.

“DIS is buying new buildings, expanding the number of classrooms, adding new collegiums, enhancing technology throughout the school, and upgrading student spaces,” Zeithaml says, calling attention to its new student hub, located down the street from the DIS main building, that contains study spaces, a theater, a library, and various student-focused services. The expansion of assistance to support the record number of students attending DIS has been accompanied by a correlating increase in faculty and staff, additional classes, as well as preliminary steps by DIS leadership toward a new strategic plan aimed at staying ahead of higher education trends as it maintains its commitment to imparting elements of Scandinavian culture to international learners. 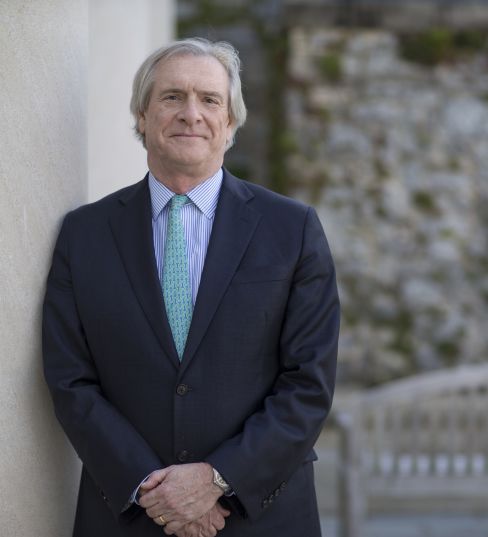 Overall, Zeithaml believes that with the many changes it has initiated, DIS is emerging from the pandemic in a stronger competitive position within the study-abroad market. He attributes that upward trajectory to the stewardship and vision of its administration.

“It was a very exciting place to spend the past five months,” he says.

Noting many evident differences since the last time he spent time at DIS, Zeithaml explained how living and working in Europe during the Russian invasion of Ukraine greatly impacted daily life—and his course.

“Obviously, the war and its implications for Denmark and Europe were a daily topic of discussion, and viewing this awful event through a European lens was incredible for all of us,” he says, explaining that he witnessed an outpouring of support for Ukraine in Copenhagen and in other European cities. “It was a very important educational experience for the students, and many of them became very engaged in the issues surrounding the war. Obviously, it was a topic that we discussed frequently in my class.”

Beyond current events, Zeithaml found that like most of higher education, DIS has made large strides to increase its emphasis on technology and data analytics across all parts of its curriculum.

“For example, DIS leadership enthusiastically supported my request to host Ryan for a two-week module on data analysis and visualization. Ryan did a great job, teaching the first week virtually from Charlottesville and then joining the class for a week in Copenhagen for additional teaching and project work focused on data visualization using Tableau. Because my course emphasized major team projects that required data analysis and presentation, this module was a necessary and appreciated component of the course, and DIS is now exploring ways to roll out similar experiences to all students through in-person and virtual workshops,” Zeithaml says. 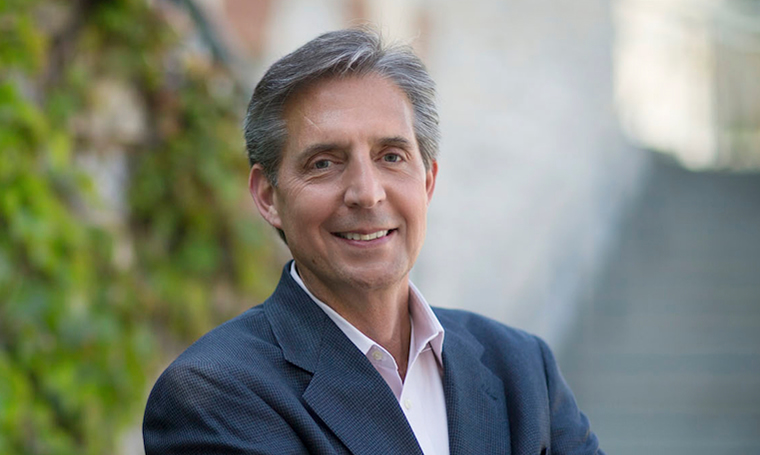 Nelson says the course allowed him and Zeithaml to try something new in how they integrated global strategy with data. The results were overwhelmingly positive: “The students seemed to really embrace the new content, and the third-year McIntire students who were in our class were able to pick up some knowledge and skills that they would have otherwise missed from the spring ICE curriculum.”

From his years of working with DIS, Zeithaml says they’ve long made use of integrating the city, other areas in Denmark, as well as neighboring European countries to learn from experts at locations that connect directly to the various disciplines they teach. In addition to taking a three-day study trip to neighboring regions for a “core course” and one weeklong journey to locations throughout Europe—which Zeithaml added allows students to place their learning in a broader European context that’s reflective of the DIS educational philosophy—time was reserved semimonthly throughout the semester to conduct content-relevant field studies within the city itself.

With the help of a Danish faculty member expert in the country’s culture, history, politics, and architecture, Zeithaml organized one such field study for his course; taking students from the classroom to landmark sights of the old city proved invaluable.

“The tour demonstrated the role and evolution of commerce and business in Denmark and Europe through an explanation of the historic spaces and buildings in the city. Because my course focused on competing in global markets, he emphasized the early and extensive role that Copenhagen and Scandinavia played in global business through the centuries. It made the history of global business for the past millennium come alive, and we all agreed that it was perhaps the best experience of the semester,” Zeithaml says. “Of course, I loved it because it was so interdisciplinary and consistent with the UVA tradition of placing the study of commerce within the context of the liberal arts and humanities.”

Beyond the course and curriculum, Nelson says that time outside of the classroom gave him and his teaching partner the license to fully embraced the Danish way, a manner of interacting with students that sounds not very different from the living and learning ideals of the Jeffersonian Academical Village. “Carl and I were able to extend our office hours through informal meetups along the Strøget—a pedestrian shopping area in Copenhagen,” Nelson says. “It was a very hygge thing to do; hygge means creating a warm atmosphere and enjoying the good things in life with good people!”

But delving into another culture while being far from Grounds presented its own set of opportunities and challenges.

“Teaching on Grounds and in Charlottesville is wonderful, but change is exciting and challenging,” Zeithaml reveals. “I felt like I was on study abroad with the students,” he says, pointing out that knowing he would be teaching in a large European city, offering a different context to take advantage of, served as the impetus for him to develop an entirely new course on globalization—and deglobalization—as well as competing in global markets in Europe and around the world.

For Nelson, leading a course in another environment proved liberating: “Everyone seems to be more open to trying new things when studying abroad. As a result, it is a wonderful opportunity for a professor to have a significant impact on how undergraduate students see the world. It can be truly life changing in so many ways.” 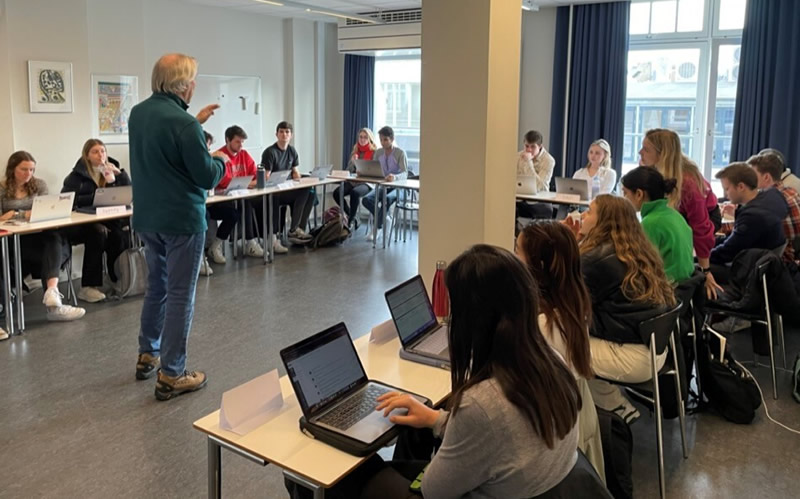 Teaching in another part of the world offered a great deal both educationally and culturally and proved to be a welcome return to the type of pre-pandemic interactions that are integral to a global education.

While Zeithaml believes that faculty at UVA must sometimes vie for the attention of their students who are drawn to activities and social events, he says that teaching at DIS may intensify that struggle (“I initially felt like I was competing against all of Europe!”). Yet he found a way to tie their many weekend and study-based travels back to his class. “I had every student select an organization that they interacted with in another country and submit a one-page summary of its strategy. We would discuss these strategies in class, sometimes focusing on major businesses, but often we learned about the strategies of hostels, restaurants, museums, nonprofits, nightclubs, airlines, and, yes, even the Jameson Distillery tour in Dublin. It turned out to be one of the most enjoyable parts of the class, and the students became very fluent in identifying and describing the concept of strategy,” he says.

The 24 students from U.S. universities of all stripes enrolled in Zeithaml’s course represented different academic backgrounds ranging from political science, economics, sustainability, computer science, and other disciplines; the cohort also included five undergraduates from McIntire. Yet the Comm School student group’s knowledge base was not shared by their peers. “The vast majority of my students were not business students,” says Zeithaml. Yet despite the fact that many hadn’t taken a single business class, what he initially found daunting about their diversity of areas of study became one of the course’s strengths.

“One of the major team projects was a thorough analysis of the political, economic, social, technological, environmental, and legal conditions of six countries. I created the six teams with a balance of backgrounds such that the students of different disciplines had much to contribute to the projects, and we all learned from them,” he recalls.

Teaching in another part of the world offered a great deal both educationally and culturally and proved to be a welcome return to the type of pre-pandemic interactions that are integral to a global education. “It was so exciting to see students and faculty studying abroad once again,” says Nelson. “It had been two years since my last study-abroad experience during J-term 2020 in Argentina. Teaching in Copenhagen has inspired me to look for more opportunities to take students and alumni around the world.”

For Zeithaml, the semesterlong sabbatical after more than 40 years as a faculty member and dean teaching the same courses for more than half of that time was nothing short of inspirational. He credits the experience with helping him to reinvent himself.

“I was initially worried about my own challenges in teaching a new class to an intellectually diverse set of students in a totally different type of program. I know that it sounds trite, but I had to embrace the challenges, and I had to change rather than trying to get others to conform to my previous ways of doing things. I suppose that I am encouraged because I really learned that I am not too old to change!”

He also found his students to be an inspiration for how they rose to the challenges of the course and pushed Zeithaml to practice what he preached about doing business in another country, as he had to remain flexible to meet his students’ various work styles and culturally influenced decision-making skills.

“Adapting to these realities was good for me,” he says, clarifying that while he provided some guidance on the major projects of the course, he “essentially threw the students in the deep end, and they excelled, taking ownership of their own learning.”

Though Nelson appeared in person for a week, he was impressed by his time in Copenhagen, both inside and outside of the classroom, where he witnessed Zeithaml learning to speak Danish—“and not wearing a tie when teaching!”