McIntire Spring Symposium, “Analytics: From Revolution to Evolution,” Offers Fascinating Look at the Past, Present, and Future of Data Analytics

Keynote speaker Thomas H. Davenport and a panel of outstanding practitioners ponder the role of humans in a brave new world of smart machines. 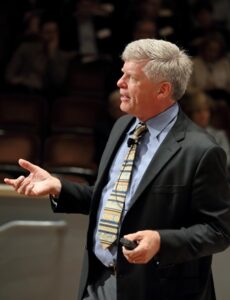 Could your job—as a professor, doctor, lawyer, accountant, financial adviser, or news reporter—be performed by an analytically swift, decision-capable computer? If so, what role might be left for you?

It was this question—and, indeed, the larger philosophically and economically profound question of what happens to humans when important decisions and actions can be undertaken by smart machines and artificial intelligence—that was addressed with wit, wisdom, and unparalleled insight by leading IT and business analytics expert Thomas H. Davenport during the McIntire School of Commerce’s 2016 Spring Symposium, titled “Analytics: From Revolution to Evolution.” Davenport’s keynote address at the April 29 event, held in UVA’s Old Cabell Hall, was followed by a lively panel discussion during which Davenport and five outstanding professionals, all of whose businesses relied on state-of-the-art analytical techniques, offered their own practically informed opinions and insights on the question of man versus machine.

“Thomas H. Davenport is not only one of the world’s leading authorities on data analytics, but one of the most creative thinkers in the field,” says McIntire Professor Rick Netemeyer, who played a key role in organizing the event. “With his ability to view analytics from a technological, commercial, and sociological perspective, he offers unparalleled insight into the subject, and it was a tremendous privilege to welcome him to the University of Virginia and the McIntire School of Commerce.”

Davenport, the President’s Distinguished Professor of Information Technology and Management at Babson College, pioneered the concept of “competing on analytics” in his now-classic 2006 Harvard Business Review article and subsequent bestselling book by the same name. Widely regarded as one of the world’s top business/technology analysts, as well as one of the most influential leaders in the IT industry and in business education, Davenport has written or edited 17 books and more than 100 articles in such top-tier journals as Harvard Business Review, Sloan Management Review, and The Financial Times. His latest book is Only Humans Need Apply: Winners and Losers in the Age of Smart Machines.

Where We Came from…and Where We’re Going
Davenport began by chronicling the rapid advance of the field of analytics, outlining its transformation from, in the 1970s, a painstakingly slow set of back-office operations resulting in descriptive reports; to the open-source-enabled era of complex, unstructured “big data,” emerging in the early 2000s; to the current era of predictive analytics; to the advent of an astonishing new “cognitive era,” in which data can be used to make lightning-fast, automated decisions, process language, and engage in the algorithmically enabled sort of data synthesis akin to—and by many measures, superior to—human cognition.

“There’s so much data being collected that humans can’t possibly analyze it, especially at the speed that something like digital marketing requires,” Davenport told the audience. More, he said, even under the best of circumstances, humans are subject to biases and fallacies that serve to cloud sound judgment. Often, he said, “it’s best to let the machines decide.”

Man versus Machine
But what are the implications of machines’ advance into domains of thought—and, indeed, sophisticated forms of labor—long reserved solely for humans? Davenport pointed out that such luminaries as Microsoft Founder Bill Gates and Nobel Prize-winning economist Robert Shiller have expressed profound concern at the seemingly unstoppable growth of machines’ cognitive and economic power, with world-renowned theoretical physicist Stephen Hawking warning that too-clever machines, programmed to continue getting smarter and smarter, could spell doom for humanity.

Davenport, while quick to acknowledge the very real challenges (most immediately, in human employment) likely to accompany the increasing prevalence of smart machines, took a more optimistic view of the future. While conceding that—just as in the industrial revolution—jobs might be lost in the short-term, the most likely scenario was “smart machines working alongside smart people,” a situation that he termed “augmentation.”

“We’ve seen this before, with textile manufacturing, and with the use of spreadsheets,” Davenport said, noting that in both cases, humans, rather than being rendered obsolete, assumed positions of greater authority and managerial complexity, as they took on new roles that required the deft management and incorporation of machine power.

Stepping into the Future
Still, Davenport told the audience, ensuring that you end up in such a position will require some heavy-duty strategic career planning. Accordingly, he offered five ways to get—and keep—a job in the new “smart” economy:

Ultimately, Davenport said, things will be okay. “Technology is good, and it’s getting better,” he told listeners, assuring them that “we’ll work out the kinks.” In any case, smart machines are here, and they’ve rapidly become an integral part of the way we live, think, and work. “Start your engines,” Davenport said, in closing.

Panel of Experts
Davenport’s remarks were followed by a lively panel discussion of the current—and likely future—realities of business analytics and smart technologies as business tools, addressing questions ranging from the nature and limitations of machines’ decision-making capabilities, to what sorts of analytics and actions should (or should not) be automated, to the necessity for human insight into questions requiring nuanced judgment and understanding.

“I can’t think of a better encore to Professor Davenport’s presentation than the thought-provoking discussion of this incredibly accomplished group of professionals, all of whom are deeply involved in the day-to-day realities of the incredible power—and fascinating limitations—of smart technologies,” says Netemeyer. “On behalf of the entire McIntire School of Commerce, I offer my tremendous appreciation for their willingness to share their time and expertise with the McIntire and UVA communities.”

Providing pithy descriptions of their career paths, as well as intriguing descriptions of the central role that today’s analytic technologies play in their businesses, the panelists went on to offer their opinions on just how far automation could go—and came squarely down on the side of augmentation.

For one thing, Young pointed out, questions of interpretation, particularly those having to do with the psychology of human motivation, are still best handled by people. “There’s a big distinction between forecasting events and understanding events,” he told the audience. “Predicting something, which smart machines can do very well, doesn’t help you understand it.”

More, the panelists opined, automated analysis is only as good as the strategic goals by which it is guided. “What questions should you be asking, and what business problems are you trying to solve? There has to be human leadership guiding the use of analytical capabilities,” Smith told listeners. In addition, Lefar and Wilson pointed out, much of business has to do with face-to-face meetings, careful listening, and trust building. While lengthy transactions—such as finding the right rental property—can be rendered far more efficient by the use of smart technologies, ultimately, Lefar said, “sales are closed by people.”

Fuentes, after describing the advent of a new high-tech concierge service being pioneered by Hilton, called the new technology “an opportunity for us to enhance our guests’ experience—not replace a human interaction.” Indeed, she said, noting that she was currently hiring, “I’m still super-excited about the human component.”