This is Sarker’s second honorary degree recognizing his significant scholarly work and his international stature in the field of information systems.

IT Professor Suprateek Sarker is one of six professors to be conferred a 2022 honorary doctorate from top European university Copenhagen Business School. Sarker traveled to Denmark in May to receive the prestigious degree, which is presented to researchers of outstanding scientific merit who have made remarkable contributions to research, dissemination, and teaching.

The CBS Department of Digitalization nominated Sarker based on his high level of international research excellence. CBS also cited the honorary doctorate as an opportunity to recognize Sarker’s longstanding relationship with the school and to further strengthen the bond between the two.

This is Sarker’s second honorary degree recognizing his significant scholarly work and his international stature in the field of information systems: In August 2016, he earned an honorary doctorate from the University of Jyväskylä in Finland. 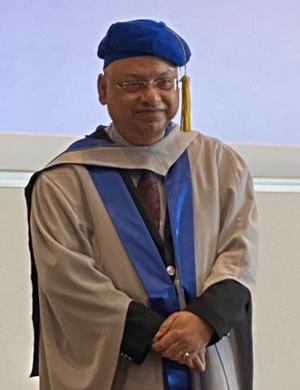 Sarker, Rolls-Royce Commonwealth Commerce Professor at the McIntire School, previously served as Visiting Distinguished Professor at Aalto University (Helsinki, Finland); as University of London Chair of Technology & Information Management (part-time) at Royal Holloway University of London (U.K.); as Microsoft Chair at Copenhagen Business School (Denmark); and as Philip Kays Distinguished Professor at Washington State University (U.S.) and has had a number of short-term visiting appointments around the world. He has also served as a doctoral dissertation examiner for scholars in Asia, Australia, New Zealand, Europe, and South Africa.