As a student-athlete, Aiello employs strategies to excel both in his sport and in the classroom.

Commerce graduate student and NCAA wrestling athlete Jay Aiello has already had an accomplished collegiate career in sports, and he appears destined for success in his professional life after McIntire as well.

What’s the secret? Maybe it’s the fact that he doesn’t shy away from tough tasks and makes the most of the opportunities presented to him. It’s a winning formula.

The Centreville, VA, native joined the UVA wrestling team as a first-year recruit walk-on. Since that time, he’s been ranked in the top 10 nationally in his weight class, and recently competed in Serbia, representing the U.S. as part of the U23 World Wrestling Championships; he earned a bronze medal in the contest.

Indicative of his dedication, Aiello says being part of the European-staged event was wholly positive, despite the stiff competition and effort required to get to that international stage.

“I was truly so grateful just to get to represent the United States at the world championship that most of the hurdles we had to jump through in Serbia seemed like nothing. The language barrier, wrestling against world-class wrestlers, and trying to stay caught up in school were not really challenging for me because I was thankful for the experience and all of the responsibilities that came with it.”

A devout Christian, he says that his faith serves as his guide, explaining that he is at his best when he’s “working hard, loving others, and living with integrity.” That philosophy has helped him in both athletic and academic spheres, as he expressed his belief that if he falls short of reaching his goals, his connection to divine compassion and forgiveness always supports him. “This allows me to work hard with everything that I have, while also being content with whatever the outcome is,” he says.

Coming to Commerce
Earning his undergraduate degree in Economics at the College of Arts & Sciences, with a minor in Social Entrepreneurship, Aiello is now in the thick of his graduate studies: He’s pursuing the Marketing & Management track in McIntire’s M.S. in Commerce Program.

He says he had been interested in the Commerce School since he began his studies at the University, and some valuable word-of-mouth, firsthand reports were instrumental in his decision to apply for grad school.

“I have known a good number of teammates and friends who have gone through the program and really enjoyed it. From conversations with these people and the background knowledge I had of McIntire, I became even more interested in the program,” says Aiello.

While he admits he wasn’t sure that he would necessarily be a good fit for the M.S. in Commerce Program before he began, he says that knowing he can rely on a strong work ethic and an unbridled enthusiasm for collaboration made the graduate degree a worthwhile undertaking. 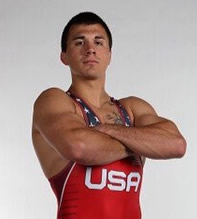 As a student-athlete, Aiello has been employing strategies to not only stay afloat, but to excel. His methods held true at the College, and are also serving him well at McIntire. He credits his time as a committed wrestler with providing immense value to many areas of his life, but especially in the classroom, explaining that athletics have helped to strengthen his learning experience in a variety of ways.

While he notes that “discipline, time-management, and the ability to sacrifice something in the moment for a chance of something greater down the line” have clearly helped to make a difference, two particular frameworks have proven to be beneficial for him.

“First, I can work through things when they get hard. I am not one to give up in the face of adversity,” he says. “The second is the intentionality that is required to be a successful wrestler. Every day I go into the wrestling room, I have what I want to work on in mind. The same is true when I enter the classroom: I am intentional when I engage with academics in or out of the classroom.”

His life as a student-athlete has presented its share of time management issues, as most of the week, he estimates that he’s busy with class and practice hour by hour between 7 in the morning and 5 in the afternoon. But despite the long days, he says that practicing teamwork in his chosen sport has been a boon in his Comm School coursework.

“In McIntire, we work in teams a lot of the time. My experience as a student-athlete has helped me know how to be a good team member and how to support the people around me,” he says, while also crediting the faculty for their input into shaping his time in the grad program.

Though Aiello is still unsure of exactly how he plans to apply his studies in his professional life after McIntire, he’s undeterred by the ambiguity, and much as he relies on his ability to prepare and focus in wrestling, he’s sure he’ll be ready to pivot when the time comes.

“I know that I have qualities that will lend themselves well to whatever I end up doing, so I am not really worried. I look forward to making new relationships with the people who are placed in my life.”