Starting Up: Entrepreneurship with Leigha Field (A&S ’11, M.S. in Commerce ’12) of Okko

Commerce School alumna and recent Wharton graduate Leigha Field and her University of Pennsylvania classmate unexpectedly discovered a common but unaddressed problem. And midstream in the process of pursuing their M.B.A.s, they decided to undertake the great challenge to solve it. 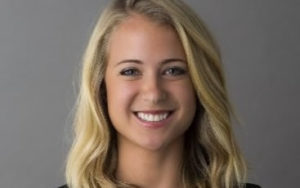 Why do people start their own businesses? Becoming a successful entrepreneur necessitates the honing of many skills, and it requires the courage of self-made convictions. And like the proverb about necessity being the mother of invention, launching one’s own venture can be the result of living through an uncomfortable situation or an inciting incident that spurs the entrepreneur into action.

Case in point: Commerce School alumna and recent Wharton graduate Leigha Field and her University of Pennsylvania classmate Phoebe Kunitomi unexpectedly discovered a common but unaddressed problem. And midstream in the process of pursuing their M.B.A.s, they decided to undertake the great challenge to solve it.

While no-show women’s undergarments already exist, Field explains that it’s often difficult to find just the right type at a fair price. They know from experience: A crazed search led the two women in and out of shops trying to find seamless underwear that worked with Kunitomi’s dress—mere minutes before a pressing social event. It was then that they realized there had to be a better way.

Off the Sidelines
The duo resolved to join forces to combat the problem, co-founding their business Okko, a startup built on the strength of a product line that aims to remove this very real stress point for many women consumers.

Field was ready. Upon completing McIntire’s M.S. in Commerce Program, she spent five years at Level Equity in New York, specializing in early-stage investing in the technology and e-commerce sectors. But she had the desire to invest in herself and launch her own venture—she just didn’t want to go it alone.

“I really felt like I wanted the experience of starting my own company instead of being on the sidelines helping other ones,” she says. “It’s just my own personality. I knew I’d never want to be a solo founder. I didn’t really know what the idea would be and decided to go back to business school as a way to figure that out. Both Phoebe and I felt like this business was something we wanted to explore. In terms of the actual product category, this was an actual need we both had and felt passionate about.”

Making friends with Kunitomi at the start of their M.B.A. program was as fortuitous, as the high-pressure shopping situation they experienced together served as a catalyzing moment for their nascent entrepreneurial careers.

Missteps Are Part of the Process
The process of developing Okko has been a learning experience that took an adjustment for how Field approaches business situations.

“We know we’re going to make mistakes in what we’re doing, as opposed to investing, where you’re analyzing an investment decision,” Field says. “Of course, every investment’s not going to be perfect, but you’re sitting back and evaluating. You don’t have to move forward with an investment if you don’t feel comfortable with it. Being an entrepreneur requires you to accept that a lot more mistakes are going to be made.”

One such mistake they overcame concerned their physical supply chain and manufacturing in Asia. But determined to handle as much as they could themselves—including one such instance of what Field calls a “nightmare situation”—she insists that they’ve emerged much wiser from the ordeal.

Yet getting Okko off the ground has also required both women to be willing to ask for guidance when they find themselves in unfamiliar territory.

“We’re able to admit what we don’t know. We’ll say that something isn’t in our area of expertise and reach out to someone else for help instead of being too confident in our abilities,” she says.

As Okko continues to grow, Field says she’s excited to see her dedicated efforts continue to develop the business, which she hopes includes moving into a dedicated office space and hiring full-time employees in the near future, all while advancing both the external brand and the infrastructure of the company.

Field’s Four Tips for Starting Your Own Business
Field and Kunitomi’s journey thus far has taught them a great deal about the early stages of entrepreneurship, and here, Field shares what she’s learned about successfully initiating a new venture:

1. Don’t be afraid of failure. Most McIntire alums—especially those like me who enter careers in finance or consulting—have always worked hard and succeeded at most things they do, especially where there’s a clear path of expectations and rewards. And I think, as women, in particular, we’re raised to aim for perfection rather than risk taking. Starting a company, I needed to learn to shed this mindset completely, because a certain amount of failure is inevitable; trying to avoid every potential risk would mean never moving past the PowerPoint deck. With any setback, it’s important to spend some time critically assessing where you could improve the next time, but don’t dwell. Look forward and ask, “How do I solve this now?” Embrace the challenge.

2. Listen to critical feedback, but stay true to yourself. Everyone has their own opinions. While it’s good to hear lots of them and listen without your defenses up, don’t let conflicting feedback bog you down. Trying to please everyone is a fool’s errand. Stay true to yourself, your idea, and your key goals for the business, and that authenticity will eventually payoff.

3. Before raising capital, think about your long-term goals. Would you be happy running a small but very profitable, independent lifestyle business for years to come? Are you comfortable risking it all to be the next big IPO? Or maybe you want to build something in between? It’s important to ask yourself these questions before you raise money, because you want to make sure your goals align with the strategy your investors will push you to take. And remember that raising money isn’t a sign of success in and of itself! While it can sound sexy for a business to make headlines for “raising a $75M Series C from XYZ investor,” that doesn’t always mean that’s the best path for your business. Think strategically about the long term, rather than what feels most exciting or would make things more “comfortable” today.

4. Carve out time for yourself—and remember to laugh! Starting a business can be incredibly stressful and time consuming, but don’t forget to recharge your most important asset in the early days: yourself. Scheduling time to exercise, meditate, see a therapist, etc. is incredibly important for mental health maintenance and work productivity; allowing yourself the flexibility to grab those unplanned drinks with friends or to get away for the weekend every now and then is just as critical. And when things are tough, don’t bottle the stress up and try to pretend like everything is okay. Be open with the people you confide in and try and find some humor in the situation.

Sometimes it can seem impossible, but imagining myself in 5-10 years telling stories of our early days really helps! While he’s not often (ever?) quoted in the context of business, Ricky Gervais often says, “That’s what humor is for… it gets us over the bad stuff. If you can laugh in the face of adversity, you’re bulletproof.”