The April 15, 2005, event, titled “Living Dangerously? Risk in the 21st Century,” brought together leading academics and some of the world’s most successful investors as they explored the environmental, geopolitical, and business risks facing the modern world. 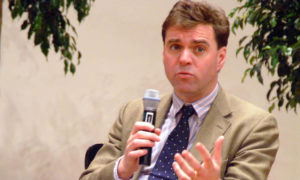 Those words, penned in 1859 by Charles Dickens, may well be an anthem for the 21st century.

So suggested the dazzling collection of contemporary thought leaders who spoke recently at the Sixth Annual Spring Symposium, jointly presented by McIntire’s Center for Financial Innovation, Center for Growth Enterprises, and Center for the Management of Information Technology. The April 15, 2005, event, titled “Living Dangerously? Risk in the 21st Century,” brought together leading academics and some of the world’s most successful investors as they explored the environmental, geopolitical, and business risks facing the modern world.

Greatest Challenge Ever
Speaking of climate change, James Gustave Speth, Author of Red Sky at Morning: America and the Crisis of the Global Environment and Dean of the Yale School of Forestry, said some progress has been made, but not nearly enough.

“To all the young people here in this audience, let me tell it to you straight,” the opening speaker proclaimed. “Your parents’ generation, my generation, we’ve left you with the greatest threat and the greatest challenge ever. We’ve placed at the heart of our huge and rapidly growing economic enterprise a deep reliance on fossil fuels, the extravagant use of which has launched our societies on a planetary-scale experiment of unknown but likely devastating consequences—unless we urgently implement far-reaching changes in our energy system. The new generation, your generation, is going to have to help lead us out of this situation. We’re going to have to fix this problem, and do so urgently.”

The China Connection
Julian Robertson, Chairman and CEO of the legendary investment firm Tiger Management LLC, represented the consensus view of the business leaders on the panel when he said that China provides an exciting world of opportunity for those seeking to invest in the future.

Niall Ferguson, Harvard Professor and Author of numerous books, including Colossus: The Price of America’s Empire, pointed out that Asia’s emerging free market economies could threaten America’s position in the global economy.

“The more countries embrace globalization, the more countries embrace the American model of the free market, the more rivals to the United States emerge,” he warned. “Our success in persuading Asians to embrace the market, to abandon the planned economy, is transforming not only China into a great power, but also India. New empires are on the rise in the East. And these empires pose a fundamental threat to the dominance that Americans have come to enjoy in the world since the end of World War II.”

“How damaged was brand?” asked Walker. “Can you come in and [repair it] within a couple of years?”

“To me,” Breen answered, “the reputation of the company was so tattered, tarnished, beat up, kicked around, that I was concerned. We have 260,000 employees around the world. I was concerned that they were humiliated, embarrassed, and angry…It’s pretty tough to do a job when you’re Tyco selling at $8, they say you’re going bankrupt, and you’re tarred and feathered. So, to me, we first had to focus on the employees. We needed to get them motivated to want to climb the hill with us again.

“And I’ve learned this a few other times in my career. It’s amazing—when you’re open with people, you tell them what you’re going to try to do, when you explain you don’t have all the answers, it’s amazing how the human spirit rallies…And that’s what started to happen. We’ve got that winning spirit back.”

Advice for Risky Times
So, what should an investor do in an era that sees both great upside potential and the rallying of the human spirit combined with significant business risk, geopolitical risk, and environmental risk? How should we approach an age that may be both the best and worst of times?

Richard Tadler (McIntire ’78), Managing Partner of TA Associates, said, “We [in the private equity industry] hope that our diversification across industries and countries will hold us in good stead. I’ll say one reason why we probably would not make great hedge fund investors is that we are optimists. We have to be optimists to constantly take that long, somewhat risky position, over five to ten years.”

John Griffin (McIntire ’85), President and Founder of Blue Ridge Capital, concurred, offering these concluding thoughts: “Today has been about risk. It has been about living dangerously, taking risks, getting reward for the risk you take, the risks we face as human beings and as businesspeople…I read a fascinating interview with Ted Turner…His personal holdings had fallen by $7 billion. At the end of the article, he was asked, ‘What have you learned from this lesson?’ And he looked straight at the reporter and he said, ‘Diversify.’ So I leave you with that as one of the key words for today.”