From the Centennial Archives: From Grounds to Across the Globe: The Sharmas’ McIntire Roots Run Deep

The Sharmas’ legacy continues to grow on Grounds, as their enduring bond with McIntire influences their lives and those who know them.

This Centennial Year, we honor our past, present, and future. This article was originally published March 14, 2018. Varun Sharma is an Associate Consultant at Mastercard Data & Services; Vandana Sharma is Managing Director, Head of US Regulatory Affairs at Credit Suisse; and Virginia Sharma is Vice President, Brand Solutions at JioSaavn. 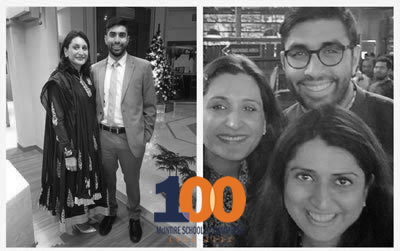 Some people take the easy way out, and then there are the Sharmas.

Challenges have driven members of the Sharma family to succeed at McIntire, across UVA, and in their storied careers. Current Comm School and International Economics student Varun (McIntire ’19), his mother, Vandana (McIntire ’92), and aunt Virginia (McIntire ’99) have all forged their own impressive paths by undertaking the unexpected.

Motivated by a self-described inclination to “run towards the fire,” Vandana found herself heading Investor Relations for Ambac Financial Group during the financial crisis of 2008-2009, despite having no background in it. In another daunting role, she was responsible for overseeing the residential mortgage-backed securities group at S&P after the housing market crash. She now serves as Senior Vice President at the Federal Reserve Bank of New York.

Her sister Virginia, a career global marketer interested in pivoting into sales, found openings rare for someone with her specific marketing background, but she seized a sudden opportunity to change gears and has led a sales team since April 2016 as Director of Marketing Solutions for LinkedIn India. Varun’s aunt credits her McIntire education for helping her transition into leadership roles and for learning how to leverage the diverse skills of others to build the strongest teams. “A special shout-out here to Professor Brad Brown, who not only taught us to be unafraid and take intelligent risks, but also tipped us off about IBM interviewing on Grounds—that’s how I got my first marketing job!” she says.

Vandana explains that education has been an essential part of the family’s history, which also includes Varun’s aunt Maneesha (A&S ’93), another UVA graduate. “The fact that my son is at UVA would have made his grandfather so proud,” Vandana says. “He always said that all he could give us was the best education available to us. He loved Charlottesville and would smile every time we took the turn onto Route 29. I remember when I applied to the Comm School; he was surer than I was that I would get in.”

Despite the clear connections to McIntire, Varun says that growing up, because of a desire to differentiate himself from his family, he was convinced he would go to college anywhere but UVA. Yet during a visit to Grounds as a Jefferson Scholarship finalist, he had a profound change of heart. Varun realized that despite choosing to attend the same university as his mother and her two sisters, the wealth of choices and possibilities available to him at the University and McIntire would give him the capacity for creating his own meaningfully different college experience.

Staying Focused on the Big Picture
But that isn’t to say that the journeys of his family members haven’t had a profound effect on the promising third-year student.

“What resonates with me most is the fact that my mother and aunt weren’t necessarily the best students in school. Despite that, they have both had incredibly successful careers,” Varun says. “Their trajectories consistently remind me not to sweat the small stuff; test scores and acceptances or rejections from student organizations and internships do not have a large impact on your ability to become a successful business professional.”

Varun is also keenly aware of the difficulties his family members faced in pursuing their goals. “I think it’s important to note that they were able to climb the corporate ladder as women who grew up abroad, which I think makes their accomplishments even more impressive,” he says.

Lifting Others along the Way
Vandana and Virginia expect him to use his talents to enact positive change and help foster a more diverse workplace landscape. His mother encourages young women to consider careers in finance, as she has through her efforts on Grounds, such as speaking with Smart Woman Securities, a student organization that seeks to educate women about investing and finance fundamentals. Virginia wants her nephew to use his limitless potential to “lift others with him along the way, especially women,” she says. “Varun has grown up around strong and successful women his whole life. He has been a feminist from an early age without even realizing it. Women at work and at school need allies more than ever to create space and opportunity for them. I hope he will step up when he has to—even if he isn’t asked.”

Varun says he is ready to rise to the occasion and poised to ensure that the Sharma legacy for promoting equitable opportunities remains paramount. “I want my family’s story to help illustrate that successful careers in business-related fields are accessible to minority groups from a variety of different backgrounds,” he adds.

Aspiring to serve as the next exemplary figure in his family, the Jefferson Scholarship recipient appreciates the hands-on learning benefits of his Comm School education and that connection to his life after college. “My favorite part of McIntire thus far has definitely been the real-world exposure that the Integrated Core Experience curriculum provides,” Varun says. “The corporate sponsor projects give students an opportunity to tackle real problems. The project I worked on last semester was extremely rewarding, because it allowed me to hone my financial modeling, communication, and strategic problem-solving skills in an integrated fashion.”

Looking toward the future, the Jersey City, NJ, native is preparing for a summer position as a Staff Consultant in Ernst & Young’s financial service practice, and using his final year at McIntire to broaden his skill set via basic coding and financial modeling. His goals for consulting work include international travel to leverage his background in international affairs. Long term, he has an eye on securing a role “at a multilateral financial institution like the World Bank or the IMF,” tackling macroeconomic issues in a global context.

Courageous and Determined
With Varun’s bright prospects, Vandana believes that her son will thrive in whatever field he decides to pursue, and hopes he has “a life of many adventures,” and “enjoys all the highs and learns from the lows.” Virginia is also certain about the breadth of her nephew’s many talents: “I don’t worry about him doing well,” she says.

Virginia’s conviction reflects a family credo: “We are defined by two things,” she says, “fearlessness—from my mother—and persistence—from my father. The Sharmas show up 100% ready to go and confident. But behind the scenes, we prepare. We work hard. Nothing is assumed or expected. There is no sense of entitlement.”

With Varun’s many achievements (including his recent election as one of McIntire’s two representatives on UVA’s Judiciary Committee) readying him for a spring 2019 graduation, the family links to the Comm School are primed to be deepened by his future as an alumnus—that is, judging by the highly active engagement of his relatives who came before him.

“McIntire does a great job of finding and staying connected with me,” Virginia says. “I enjoy hosting Comm students at the LinkedIn office for a corporate visit whenever there is a delegation visiting. Interacting with ‘Hoos, no matter what age, is always a great way to feel connected back to the School, and the McIntire Center for Global Commerce Advisory Board will be a great way of staying even more connected.”

Vandana says that her McIntire ties have helped to support many longstanding relationships. “I just attended my 25th reunion with some of my closest friends. These are friendships that have sustained me.”

Unsurprisingly, she’s not content to let her connection to McIntire be defined by nostalgia. “In years past, I have recruited at UVA,” she says. “In the future, I look forward to finding opportunities to come back and share my professional experiences at the Federal Reserve.”

The Sharmas’ legacy continues to grow on Grounds, as their enduring bond with McIntire influences their lives and those who know them. As Vandana notes, “I have a special connection to UVA and especially the Comm School: It is a large part of who I am and how I interact with the world.”