Saving the Diversity of Our Investments: Two McIntire Professors Calculate the Facts

When Finance Professors Carola Schenone and Patrick Dennis questioned the economic theory behind a controversial paper decrying common ownership in funds, they decided to dig into the data and the methodology. Their research boldly refutes claims that institutional investments—the same types of investments comprising the retirement savings portfolios of many Americans—are anticompetitive. 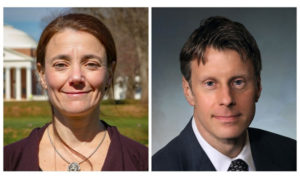 From retirement to saving for college tuition, institutional investing has become a ubiquitous tool for many of us trying to grow our money. Building a diversified portfolio of securities is often the prescribed course for helping us accomplish our financial goals. However, growing scrutiny around the effect that large institutional investors might have on the competitive interaction between firms held in their portfolio is spurring a much larger debate. Is the function of the funds we invest in undermining the very fabric of competition among companies in a given industry?

McIntire Finance Professors Carola Schenone and Patrick Dennis, along with their co-author, Kristopher Gerardi from the Federal Reserve Bank of Atlanta, say it’s simply not so.

The findings in their new paper, “Common Ownership Does Not Have Anti-Competitive Effects in the Airline Industry,” refute the growing claims in the finance and legal literature that institutions such as mutual and pension funds—which own shares in firms competing in the product market as part of their diversification strategy—are actually influencing these firms to collude and charge consumers higher prices. Their research carries far-reaching financial and legal implications, with lawyers Eric Posner and E. Glen Weyl at Slate calling on Congress to ban index funds—or at least ban them from owning shares in more than one firm in an industry.

At the root of the other side of the debate is a controversial paper written for The Journal of Finance, “Anti-Competitive Effects of Common Ownership,” by Jose Azar, Martin Schmalz, and Isabel Tecu. They hypothesize that “common owners”—institutional investors who control shares in firms competing in the same product market—influence firms to engage in behavior that undermines the competitive nature of a free-market economy. Using the airline industry as an example, they claim that customers pay more per flight due to common ownership.

“I took issue with the economic theory underpinning their hypothesis and started investigating,” says Schenone, who for several years has been working on the interaction of product market competition and the financial conditions of firms, using the airline industry as an empirical laboratory.

Two conditions must be met for common ownership to cause anticompetitive effects in a market, she notes. First, companies in the product market, as well as asset managers in the fund industry, need to be maximizing an unconventional objective function. “This means that firm managers are not maximizing their firm’s value, but the value of all firms in the industry that have the same common owners,” Schenone explains, “and that fund managers have objectives other than maximizing assets under management.”

The second condition, she adds, is that institutional investors holding shares in multiple companies in the same product market must be able to exert significant control over the decisions of those companies’ managers—and have a credible mechanism to punish them when they deviate from following the anticompetitive directive set forth by the institutional investor.

Could this actually be happening? Schenone says that these are big assumptions to make without employing any accepted conceptual backbone, and with predictions that have no support “in the established literature on corporate finance, the theory of the firm, and asset management.”

Further, Schenone argues that Azar et al. based their results on some considerable “theoretical inaccuracies,” including the use of an atypical database that does not “follow the established empirical literature on airline pricing.” They also used a “controversial econometric model that arbitrarily weighs some observations more than others and ignores the simultaneity of the choice of price and market share.” Schenone believes that the authors overlooked the fact that shareholders of bankrupt firms no longer retain any ownership or control rights, an important factor for influencing the results.

Dennis emphasizes the importance of Schenone’s final point. “Airlines have regularly gone through periods of bankruptcy, remaining that way for years,” he says. “Azar and his colleagues’ basic assumption is that during bankruptcy, the financial institutions holding equity can still influence the airlines. That’s false. In bankruptcy, there are no shareholders. The debtholders take hold of the firm, so there’s no way a shareholder of a bankrupt airline could influence anything.”

Unlike Azar et al., Dennis adds that when undertaking their research, he, Schenone, and Gerardi set the control rights—those rights that an investment company has over an airline during bankruptcy—to zero. “Because their paper assumes that the control rights continue during bankruptcy,” he says, “we think they made some incorrect assumptions. When you make the correct ones, the results go away.”

Schenone says that they want to raise awareness about the mechanism behind mutual and pension funds. “We’re hoping to highlight how these prevalent investment tools work, what their objective is, and how they make it possible for the average person to invest in well-diversified portfolios at a low cost,” she says. “We also want to bring a better understanding about how firms compete, and the role of managers in maximizing firm value. Ultimately, we show that ownership of firms in the same industry has no anticompetitive effects.”

For Dennis, he hopes their research will protect funds from any kind of obstructive regulations. “A change in policy could be damaging to people who want to invest in mutual funds, because with increased volatility, they will have to accept a higher risk for a given level of return,” he says. “Your retirement and my retirement could be affected if these funds are restricted from owning shares across firms in one industry. From the standpoint of an individual investor, changing the law over common ownership could dramatically affect all of our investments.”