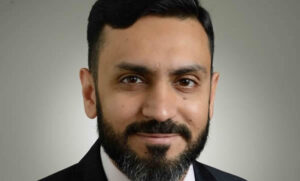 Mohamed Ali Vaid (McIntire ’99) has a proven history of turning things around. Before being promoted to company President, the former Vice President of the Saudi Cable Company helped the previously struggling firm to avoid closing its doors by controlling costs and scrapping its failing product segments and non-core assets while reducing its working capital cycle.

Before his current position, Vaid was already a highly valued decision maker and transformational visionary, repeatedly enlisted to improve the long-term growth, market share, and sales performance in companies ranging from the preowned vehicles operations of an automotive conglomerate in Saudi Arabia to the water purification technology arm of General Electric.

During a recent visit to McIntire for an introductory meeting of the newly formed Global Commerce Advisory Board (GCAB)—a group offering Comm School alumni, parents, and friends the opportunity to serve the School in its continued mission to lead global business education and research—we had the chance to sit down with the proven team builder and strategic thinker, who spoke to us about the necessary steps to reverse the trajectory of declining enterprises.

Vaid explains that before any of the following methods can be undertaken and any turnaround can be expected occur, there must be company-wide acknowledgement that the firm is facing a serious problem.

“The first assessment that any leader has to make is seeing how well it is understood throughout the organization that something went wrong, that something has to change, and that it might take necessary and drastic changes to save the company,” he says. With that introductory note as a caveat, Vaid provides the following seven insightful approaches for saving underperforming business.

1. Quickly determine who’s ready for change—and who isn’t.
Recognize the people who are going to be on your side, and those who are not—and do it very quickly. Assess who is ready for change and who will resist it, and have no patience with the resisters, because you don’t have time. People are the most important thing. No one person on his or her own is going to change the company around. Get a sense of who the people are, and tell everyone they have a fair chance. No one is carrying over any points—positive or negative—from their past. The counter starts at zero for everyone.

2. Keep an eye on cash.
In my experience, 80 to 90 percent of the time a company gets into trouble, it’s because they didn’t manage their cash well enough. Keep a very close eye on what’s coming in and where it’s going out: your inventory ratios, receivable and payable ratios, expenses. Cash becomes king in a turnaround situation.

3. Trim the fat.
This has to happen very early on. If the company is in trouble, it often takes an outsider’s view to determine exactly what is fat, because people get used to the way they’ve been operating with all of their staff and expenses that they’ve always normally had. Zero-based budgeting is tremendously helpful in this type of situation: Create a budget with zero allocated to each department, justifying each dollar that you want to spend. Which ones are absolutely necessary to continue operating and which ones are not? Then trim the fat very aggressively.

4. Focus on solving only the most important and time-sensitive problems.
You’re an emergency room doctor; you’ve got to be able to do triage. You’re not going to solve all of the company’s problems, so focus only the most important ones. Make milestones and put together a three-, four-, or five-year plan, but note the issues that require the most attention up front to save “the patient.” Don’t pick battles that aren’t necessary to be won today. Recognize those that you need to pick and win today to continue surviving into tomorrow.

5. Maintain daily business operations.
You’ve got to be able to fix the engine while the engine is still running. In other words, the company has to continue operating while you’re fixing it. What that means is that you’ve also got to be able to focus on the short term and long term concurrently. You don’t have the luxury of time to say, “I’m only going to fix the short term today, and then I’ll figure out the long term later.”

6. Communicate, communicate, and communicate.
Do it even if it means over-communicating. That doesn’t mean just with your employees, but you’ve got to go and meet your suppliers and customers. As the leader, you’ve got to be visible with every stakeholder.

You’ve got to build trust with all of your constituencies. If your suppliers lose trust, they stop supplying to you or pull their credit terms. That could be the death knell to your company. You’ve got to visit your key suppliers and tell them that your company acknowledges its mistakes and lay out exactly what you’re going to do to fix it. You’ve got to inspire confidence that you are the right person to be able to direct this turnaround, and the suppliers should continue to stand by the company’s side.

And you’ve got to do the same with the customer. Stand in front of your customers, apologize, and convince them why things are going to be different going forward.

With your own employees, you’ve got to build a sense that there’s a “burning platform” and that something is seriously wrong with the company—and then lay out a plan of exactly how you will fix it. You have to get them to buy into it, because they’re the ones who are going to execute the plan. You and your leadership team on your own are not going to be able to accomplish much. You’ve got to communicate—and not just once, but regularly, so that the message is hammered inside every nook and corner of the company.

7. Celebrate early successes.
Reward the employees who have not only understood the message, but also have implemented tactics. They might be small things, like the first time you are able to reduce number of inventory days by five days. Recognize the people who have done that, maybe even with cash rewards if the company can afford that. But you have to celebrate the early successes so that people can get a sense of momentum and a feeling that they are heading in the right direction.

If people get dejected, you’ve lost already. Your employees have to be energized, and they have to feel that there’s something in it for them as well. Since you’re trimming the fat, asking employees to do more with less, you’ve got to counter that with rewards for the right behavior.