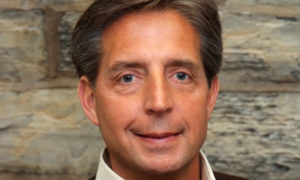 McIntire Information Technology Professor Ryan Nelson was one of 15 UVA faculty members honored as a 2014 All-University Teaching Award recipient during a banquet April 25, 2014.

Nelson, who joined McIntire in 1990, was “instrumental in developing the curriculum for and then teaching in McIntire’s first foray into its Integrated Core Experience, the signature program that differentiates McIntire from its peer schools and is highly responsible for its consistently high rankings,” says his nominator for the award.

“As Ryan’s teaching colleague in ICE for the past 15 years, I experience firsthand his great content and delivery in the classroom and his mentorship and commitment to students outside of it,” says McIntire Dean Carl Zeithaml. “I am thrilled with this recognition, and I know that generations of students agree with me. He is a tremendous example of the strong teaching and student engagement that we have from all our faculty across our programs.”

Other colleagues describe his coursework as “cutting-edge” and his pedagogy as using the most current teaching tools. “Ryan exemplifies that innovation can be an inherent part of a person and the career they choose to lead,” says one colleague. “Like fine wine, Ryan’s innovation only gets better with age!”

One student comments that Nelson gave the most powerful gift a professor can give: believing in his students. “With his patience and encouragement, Professor Nelson has given me – and all his students – that gift,” the student says.

Another student adds that Nelson, as faculty adviser to then-new CIO Student Entrepreneurs for Economic Development, “wove his institutional knowledge, academic background, and innate inquisitiveness into a figurative guidebook for the fledgling CIO, and this guidance undoubtedly inspired the organization’s global success.”

Active in the School’s undergraduate, graduate, and executive education programs, Nelson has served as Director of the Center for the Management of Information Technology since its founding in 1991, has served as Information Technology Area Coordinator for nine years, and served as Director of the M.S. in MIT Program for 10 years. He will move into the role of Associate Dean for the B.S. in Commerce Program July 1.

Says Nelson, “The holy grail of teaching for me is discovering how to help students remember a core concept that they can utilize throughout their careers.”