A transfer student from Northern Virginia Community College, Clay recalls that when he first arrived on Grounds, he was eager to get involved in the community and with the University’s LGBTQ+ groups. As such, he jumped into action to get the Pride at McIntire student org back up and running, acquiring approval and getting it officially reestablished. 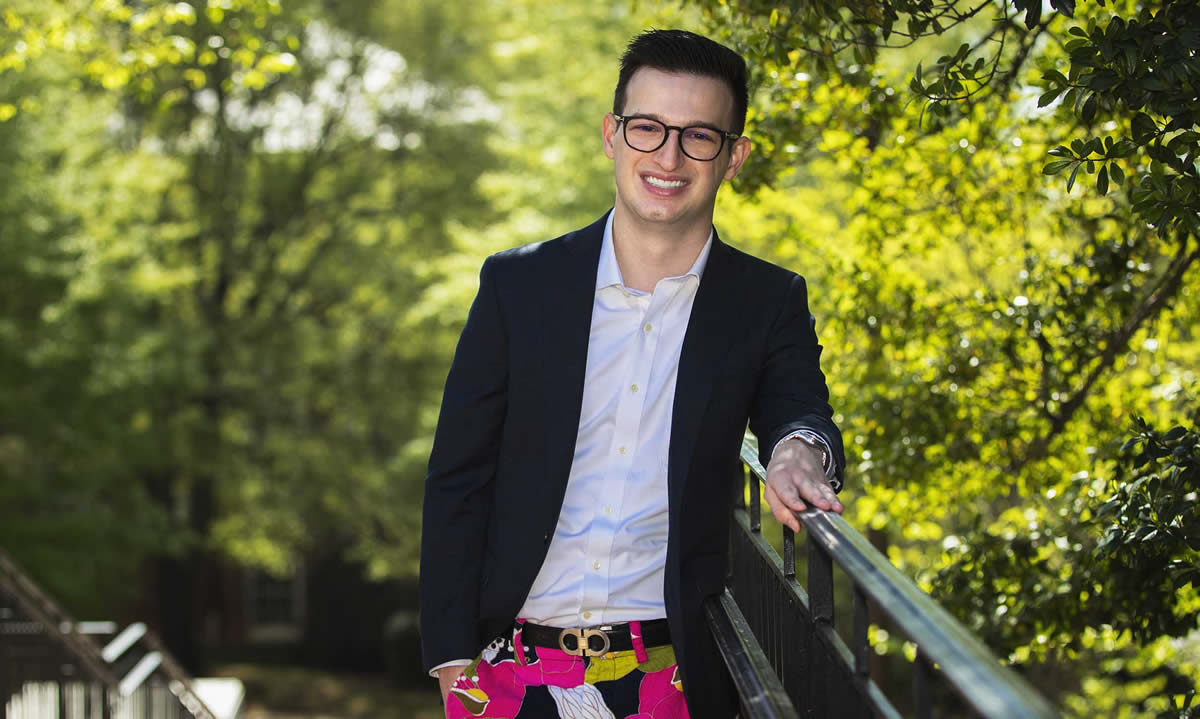 “Not once have I found myself trying to pretend to be something or someone I’m not,” Sterling Clay (McIntire ’21) says. (Photo by Dan Addison, University Communications)

In his two years at the Comm School, Sterling Clay made quite an impact on Grounds—and on everyone who has had the pleasure of knowing him.

Perhaps his greatest contribution to McIntire was his effort to reinvigorate the dormant Pride at McIntire, reviving the student organization designed to support LGBTQ+ students at UVA interested in exploring careers in business.

A transfer student from Northern Virginia Community College, Clay recalls that when he first arrived on Grounds, he was eager to get involved in the community and with the University’s LGBTQ+ groups. As such, he jumped into action to get the Pride at McIntire student org back up and running, acquiring approval and getting it officially reestablished.

As a May graduate who concentrated in Information Technology and Management, Clay is now off to work at Accenture in the Washington, D.C., area. Undoubtedly, his experiences as a leader of the student org will strengthen his ability to connect and support others in his professional endeavors. That strong attitude and welcoming openness are the result of a self-respect and an honest self-knowledge Clay holds concerning who he is.

Authenticity First
“I grew up in Point Clear, AL, an area where being myself was something I was told to be ashamed of,” Clay has said.

Though he admits he was fortunate to be raised by a very accepting family and to have a supportive group of friends, he says that before starting college, he harbored a belief that he’d ultimately have to suppress his true self once he joined the working world.

“I was under the impression that to be successful in business, I needed to conform to a traditionally conservative culture in which being my authentic self was acceptable only behind closed doors,” he says. The change in attitude informed the work he did with Pride at McIntire as he put his heart into destigmatizing the concept of being “out” in a professional context. The student org helped to “provide a voice for LGBTQ+ students on Grounds who are interested in business but fear the perceived consequences of being themselves.”

Being his authentic self seems to have elevated his McIntire experience, as Clay notes the “immense camaraderie” he enjoyed at McIntire and the tight-knit atmosphere of the School. He said that closeness made for good friends, thanks in no small part to the extensive amounts of time he spent working with them in the Integrated Core Experience.

Regarding the broader UVA community, he says that “the seemingly infinite number of opportunities available to get involved” allowed him to serve in multiple leadership positions—even as a transfer student. “To me, a key part of this is the practice of student self-governance at the University, which allows students greater freedom to pursue extracurricular involvements outside of the classroom,” he says.

Staying Connected, Staying True
As it is for most graduating students, it was bittersweet for Clay to leave Grounds. He can list many cherished memories by the Rotunda, his favorite spot on Grounds, “from singing ‘The Good Old Song’ during Valentine’s Day with the LGBTQ center as a part of their ‘Love Is’ celebration, to grabbing Roots bowls with friends and sitting down to eat on the steps while overlooking the Lawn.”

But he’s sure to be back on Grounds. An item on his professional bucket list involves recruiting students to join Accenture, his new employer. “One of the first ever networking events I attended was actually an Accenture event for LGBTQ students at UVA. That’s something I’d like to be a part of in the future—except this time, on the other side of things!”

His attitude and good-natured disposition made him a popular fixture in the Comm School, and his insistence on being unapologetically his authentic self is what he said his friends would consider one of his most defining traits. “Not once have I found myself trying to pretend to be something or someone I’m not. A big part of this comes from my identity as an LGBTQ student, and I recognize that not everyone shares the same privilege I do of not feeling like they have to ‘conform to the norm.’”

That identity and his willingness to be true to it had some manifestation in his drive to restart Pride, which, ultimately, has created a legacy of sorts for Clay: “This process has proven to be one of the most rewarding experiences I’ve had at UVA, as it’s given me the ability to create something at McIntire that will have a lasting impact on the community for many years to come,” he says.