The award recognizes Grace Miller and Andrew Williams as standout individuals looking to make an impact in the commercial real estate sector upon graduating from their undergraduate studies. 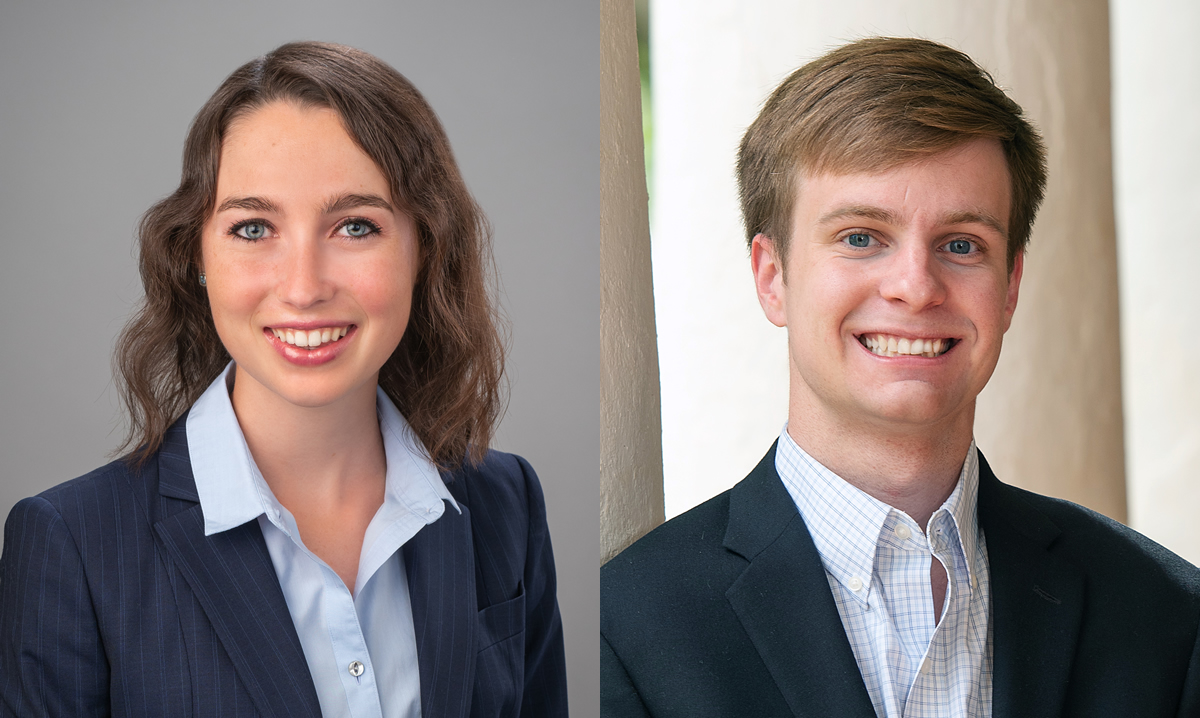 Erin Liberatore-Timko, Director, Academic and Industry Relations at Trepp, says that the awards program is “designed to recognize standout individuals who are looking to make an impact in the commercial real estate sector upon graduating from their undergraduate studies.”

“We are thrilled to feature Grace Miller and Andrew Williams as award winners,” says Timko. “We are certain that they will succeed and look forward to following their CRE career paths.”

Miller and Williams are part of a list that includes six other student winners representing undergraduate programs from across the country. Both Commerce School graduates concentrated in Finance and completed a track in Real Estate, with Williams also carrying a second major in Urban and Environmental Planning from the School of Architecture, and a minor in Economics from the College of Arts & Sciences.

Beginning later this summer, Miller will take on a position as an Investment Banking Analyst for Truist Securities in Atlanta. She says that since arriving on Grounds, she was interested in pursuing a Finance concentration, but knew little about real estate before her time at McIntire. After several mentors explained the worth of the Real Estate Track, Miller learned more about it and decided it would complement her financial courses.

“Looking back, it was one of the best academic decisions I made,” she says, citing Professors George Overstreet, Drew Sanderford, and Sanket Korgaonkar for helping her to establish a solid foundation of real estate analysis. “They brought in so many interesting guest speakers who helped broaden my perspective of the real estate industry. They also sharpened my analytical skills with the various cases discussed in class. The Trepp award is a tribute to the education I received from McIntire and the professors who helped me along the way. Overall, I’m so thankful for the time I spent at UVA.”

Williams, who will begin his career in real estate private equity in September with Sculptor Capital Management in New York, says he is honored to be included in Trepp’s inaugural class, proud that McIntire has two students on the list, and credits many faculty members in helping him to explore real estate during his four years at UVA.

“I actually started off in the School of Architecture, and I would be remiss if I did not mention Ellen Bassett, Chair of the Department of Urban and Environmental Planning, who has consistently supported my own academic progress as well as the efforts of the Virginia Undergraduate Real Estate Club,” Williams says.

“Of course, Professors Drew Sanderford, Sanket Korgaonkar, and George Overstreet have been instrumental in my real estate education at McIntire. I have had the fortune of having all three professors during this past year, and despite having class virtually, they all provided their students with a rigorous study of real estate financial modeling and an impressive slate of guest speakers from across the industry,” he says, noting the tradition and innovation for the future of the program at the Commerce School.

“Our Real Estate program has a long history of success, and with recent efforts from a group of alumni, combined with two new Real Estate professors at McIntire, I am sure the University will continue to grow its presence in the real estate industry.”

Sanderford was enthusiastic about his former students’ achievements and echoed Timko’s sentiments: “We are beyond delighted to see Grace and Andrew recognized by Trepp. It was a privilege to learn with them! Both students excelled in the classroom and in their internships. Each shows great promise as a future leader. Like Trepp, we are eager and excited to see the change our students make in the world. We wish them every success.”