Jeffrey Lovelace, a former U.S. Army Intelligence Officer who served two tours in Iraq before arriving at UVA, is committed to improving the experiences of student veterans however he can. 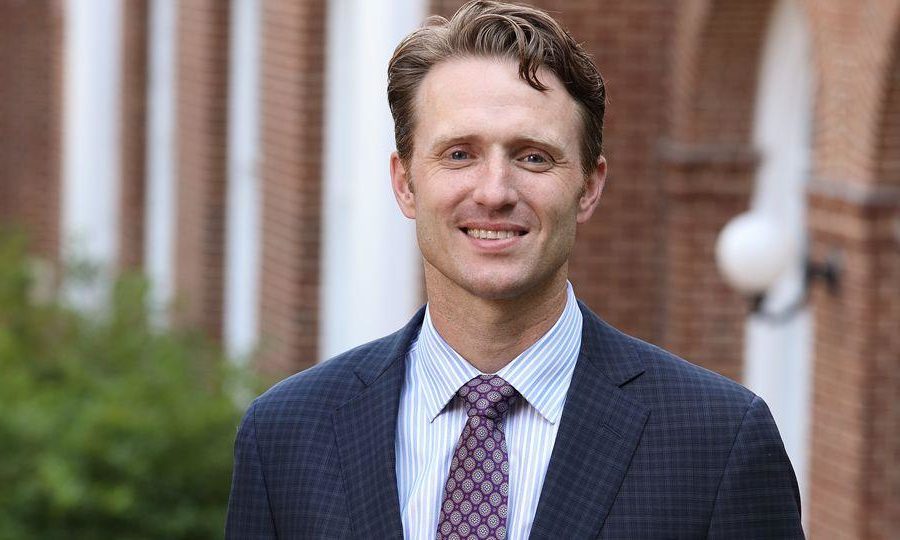 When Jeffrey Lovelace was a child, his father would talk to him about what being in the U.S. military was really all about. One of the main things he emphasized was the crucial importance of teamwork—being there for your fellow soldiers.

The older Jeffrey Lovelace grew, the deeper the conversations became.

Lovelace’s father, James—who served in the Army for 39 years before retiring in 2009 as a Lieutenant General—would never glorify any of his duties. In fact, it was usually just the opposite.

“The military will ask you to do a lot things, and you won’t always want to go where they are sending you,” said Jeffrey Lovelace, recalling some of his father’s words, “but you have agreed to serve at the behest of your country, and if your country needs you to go, you go to protect others.”

Eventually, Lovelace did just that. Following his father’s path, he attended West Point en route to serving two tours in Iraq as an Intelligence Officer.

But unlike his father, Lovelace—whose mother was an elementary school teacher—didn’t want to spend his entire professional career in the Army.

In 2009, the Army sent Lovelace to the Pennsylvania State University to earn his master’s degree before teaching at West Point. After leaving the Army, Lovelace returned to Penn State to earn his Ph.D. in 2017. Today, Lovelace is a Professor at the University of Virginia’s McIntire School of Commerce—and has remained close to his military roots by serving as an adviser for the UVA chapter of Student Veterans of America.

Lovelace strives to help veterans who are transitioning to college, with his ultimate goal to increase the number of student vets on Grounds.

“When you get out of the military, you have this sense of identity that is very tied to being a member of that organization,” he said, “and when you step back from that, you’re a little unsure what to do with it. And so in that way I relate to the student veterans. Working with them and being able to be around them, for me, have helped fill a lot of that gap.

“Sometimes I worry they do more for me than I do for them, to be frank with you. The energy that they bring to the table is pretty amazing.”

Born in Fort Bragg, NC, Lovelace lived all over the world as a child—including Alaska and Korea—as his father moved from one assignment to the next.

“Being an Army brat was sometimes hard because you had to leave your friends and things behind, but there was a wonderful culture of support in that community,” he said. “You’d show up somewhere, and you’d have a new best friend that day because everyone was used to that being the life. People were very welcoming wherever you ended up going.

“There was a little bit of a tradeoff with not having as many lifelong relationships, but getting ample opportunity to see a lot of amazing things. … I got to expand my perspective on the world and its complexities, but also got to see many similarities between people, too. This experience gave me an interest in learning more about people with different perspectives and different backgrounds.”

Initially, Lovelace, who graduated from a high school in El Paso, TX, considered attending UVA on a Navy ROTC scholarship before a visit to West Point convinced him to follow in his father’s footsteps.

While a cadet there, Lovelace was inspired by the idea of “supporting something bigger than yourself.”

“I knew it was going to push me mentally, academically, physically, and I wanted to embrace that challenge,” he said. “It just seemed like the right fit.”

Lovelace’s first tour of Iraq was primarily in the Fallujah area; his second in the northeastern part of Baghdad. He worked with airborne infantry units, trying to detect where threats were coming from and who was disseminating misinformation.

Lovelace said there were definitely some scary moments, but he never questioned his choice. “I think there are times when you feel like, ‘Man, I would really love to be back home,’” he said, “but you develop this deep sense of connection with the people who are around you and have a shared commitment toward each other.”

“When you’re with people who are dedicated to values and I think the greater good, you don’t get that sense of ‘Why am I here?’ You just want to be the best that you can to support your brothers and sisters you are serving with.”

To a certain extent, Lovelace said he has experienced a similar camaraderie during his time as a management professor in the McIntire School.

A good deal of Lovelace’s research revolves around skills he learned in the Army. A main thing he looks at is how leaders process information, disseminate it, and frame situations for people who are following them. Recently, Lovelace has examined how things such as fame and celebrity influence that process.

“Not everyone has to be cut from the same leadership cloth, but how do different leaders operate?” Lovelace said. “How do [leaders] think through problems, and then how do they behave as a result of the differences in the way that they think through different challenges? Do certain approaches work better—or worse—in different environments?”

Lovelace teaches a course, Leadership Across the Disciplines, that is part of a relaunched Leadership Minor at McIntire that provides both commerce students and those enrolled in other UVA schools the chance to be a part of the McIntire environment.

In the course, Lovelace—who serves as Director of the Leadership Minor program—has had many notable guest speakers, including UVA Women’s Soccer Head Coach Steve Swanson, who earlier this month led the Cavaliers to the College Cup, the “Final Four” of NCAA soccer.

“In retrospect, I feel as though the year of working directly with him was almost a class ‘capstone,’ where lessons became grounded in reality by seeing that he actually approaches leadership in the same manner that he teaches it,” Doyle said.

Recently, Lovelace was named a finalist for Student Veterans of America Advisor of the Year award—no small feat, considering the number of chapters across the country and the fact that serving as an adviser is not his full-time job.

“Most of the things that [Lovelace] has accomplished are [typically] done by someone in a full-time administrative position dedicated to working with student veterans,” said Doyle, who served as the chapter’s president last year.

Assistant Dean of Students David Sauerwein, who works with the UVA Student Success Team—which supports veterans, first-generation, and low-income students—said Lovelace’s personal knowledge of veteran needs, his approachability, and his compassion are what make him special.

“I feel really fortunate to have Professor Lovelace as a partner in this effort,” Sauerwein said. “A lot of people talk about supporting veterans, while Jeff does it—every day.”

Recently, Lovelace and Sauerwein partnered with offices across Grounds to create a space for veterans in Newcomb Hall that they hope to have open in the fall. They are also in the process of collecting data on veterans to better understand challenges they face.

“We want to raise the profile of veterans at UVA,” Sauerwein said. “Being a veteran means being part of an underrepresented group, which we want to make more welcome at UVA.”

Lovelace, who is a father of his own now—he has three children with his wife, Shanann—said increasing the number of student vets is a win-win.

“Student vets come in with a wealth of experience,” he said. “Not only do they deserve our support based on what they’ve done for our country, but they dramatically enhance the experience of all students on campus by adding that voice, by sharing their experiences, by being in the classroom in a way that enriches the community for all of us.

“My hope is that by supporting the student veteran population, not only are they getting more opportunities, but it’s bettering the entire UVA community.”