Lindgren, who held the Consumer Bankers Association Professorship in Retail Banking, served the McIntire faculty from 1978 to 2013. 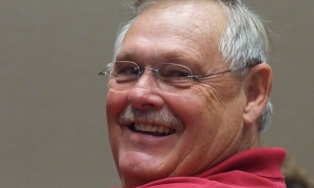 “This news is very difficult for all of us,” said McIntire Dean Carl Zeithaml. “Jack was a very important member of our community for decades and so important to the lives and careers of many students and alumni.”

“He will be greatly missed,” said Marketing Professor Carrie Heilman, who, after Lindgren’s retirement in 2013, took over the Promotions program that he built over 30 years. “I have been amazed by the impact he had on the lives of so many students over the years, more so than any other faculty member I have known in my career.”

She added that Lindgren, as Area Coordinator, was instrumental in building the School’s Marketing Area over the past two decades. “Jack had a magnetic personality that attracted good people; he was a caring mentor of young faculty and a strong leader for all of us.”

Lindgren, who held the Consumer Bankers Association Professorship in Retail Banking, served the McIntire faculty from 1978 to 2013. He is perhaps best known for leading students in his “Campaigns” class to victory in the AAF’s prestigious National Student Advertising Competition at the regional level for more than 10 years in a row and at the national level in 1982 and 2006 (second place nationally in 2004 and 2005). In addition to his role as McIntire Marketing Area Coordinator, he served as McIntire Business Institute (MBI) Program Director through 2012, having been affiliated with the program since its inception in 1982.

An active consultant, Lindgren worked for numerous institutions in the area of multimedia development and Web design, including UVA, the U.S. Department of Commerce, and the Federal Reserve Banks of Atlanta and Chicago. He also served on the faculty of numerous banking programs, including the Graduate School of Retail Bank Management, the Virginia Bankers School of Bank Management, and the National Banking School. He is a past vice president of the American Marketing Association and served on the National AMA Board of Directors.

In 2012, a former student of Lindgren’s established in his honor the John H. (Jack) Lindgren Promotions Aspects of Marketing Award, presented to an outstanding marketing student in the “Promotions Aspects of Marketing” course. In conjunction with the University’s Mead Endowment, alumni joined together in 2013 to endow a named award, the Jack Lindgren Award (which sponsors McIntire faculty participation in the Mead Program), to honor Lindgren after his extraordinary career of mentoring, encouraging, and inspiring students. In 2011, Lindgren was inducted into the Virginia Communications Hall of Fame. His proudest accomplishment was being named Outstanding Young Professor at UVA in 1983.