It’s been said that many aspects of military decision making are applicable to the business world. Strategic use of judgment, influence, leadership, and teamwork all figure prominently in successful outcomes. It was with those shared qualities in mind that Professor Brendan Boler sought to explore the parallels between the two spheres with three M.S. in Commerce students. 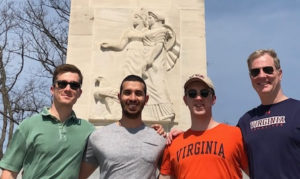 It’s been said that many aspects of military decision making are applicable to the business world. Strategic use of judgment, influence, leadership, and teamwork all figure prominently in successful outcomes. It was with those shared qualities in mind that McIntire Professor Brendan Boler sought to explore the parallels between the two spheres with three M.S. in Commerce students. His idea, which began with a proposal to the Mead Endowment, culminated with a guided tour of the Gettysburg battlefield last spring.

Widely considered the turning point in the Civil War, the decisive three-day Battle of Gettysburg is known for counting the largest number of casualties on both sides during the four-year conflict. The battle in the southern Pennsylvania town is also well remembered for the Nov. 19, 1863, dedication ceremony for the Gettysburg National Cemetery for Union soldiers that followed, when President Lincoln delivered his famous Gettysburg Address.

Though during his speech Lincoln incorrectly surmised that “the world will little note, nor long remember what we say here,” his words and the momentous battle both had a large role in shaping the identity of the country and embody important moments in decision making and leadership. Boler attended Georgetown University on an Army ROTC scholarship, and served for four years on active duty as an officer in the U.S. Army after graduation. Now a professor and management scholar, this formative military experience helped him envision studying the battle through the lens of the Michael Shaara book, The Killer Angels, followed by discussions, and finally, a tour of the location, as part of The Mead Endowment’s initiative to forge friendships between faculty and students. Boler submitted his proposal to create one of the dozen learning and bonding “dream idea” experiences funded each year by the endowment, focusing on the Battle of Gettysburg to provide insightful analysis of the strategic and tactical decisions behind the conflict, and providing an opportunity to study its links to modern managerial decision making.

Just as the seemingly disparate subjects are connected by their exemplary methods for attaining goals, the three students chosen for Boler’s dream idea had dissimilar backgrounds: Each are from different countries and different undergraduate programs, and with different majors. Yet the unifying details were that McIntire brought them to Charlottesville, where they were earning their M.S. in Commerce degrees—and interested in participating in the Gettysburg experience.

This past September, Boler reflected on the trek at the Mead Endowment Rotunda dinner, reporting to his colleagues about how the brief course met its objectives and impacted the trio who accompanied him to the battlefield. To understand the positive outcomes of having experienced the tour and the assignments leading up to it, Perry provided us with a brief account of the lessons learned, and their significance on the future endeavors of the three graduate students 155 years after Lincoln’s moving speech:

The hallowed grounds of the Civil War battlefield at Gettysburg may seem an unlikely classroom for three business graduate students. But when your professor is a U.S. Army veteran who applies lessons from military service to the business world, the purpose of a road trip makes more sense.

The plan arose from Professor Brendan Boler, an Army veteran who promotes core military values—accountability, excellence, and respect for others—on a daily basis.

With our professional tour guide, Larry Korczyk, and Boler, students Omar Amer and Thomas de la Hunty and I spent a weekend combing the grounds, listening to the stories from our professional tour guide of individual valor, and learning about the tactics of the generals and how the soldiers from each side sought to carry out their objectives—to win the battle, to turn a war.

As Commerce students, our battlefield was the classroom, but it has become the conference room where we will be negotiating deals. Our stakes pale in in comparison to the far-reaching implications of Gettysburg, but we can still aspire to prepare, execute, and lead with a measure of the fortitude on display during those three days of battle. We can learn to:

Over-prepare. Confidence, communication, and execution may go a long way toward success, but poor preparation subverts those advantages.

Know our role. Young professionals often want to immediately ascend to the corner office, but each person has a responsibility to the team. Own that responsibility.

Trust our gut. With thousands of lives on the line, Civil War generals were able to stay calm in the most chaotic of circumstances because they trusted their training and their experience.

While Professor Boler instructs a new crop of students, Tommy, Omar, and I have moved on to Bank of America, Ernst & Young, and Capital One, respectively. We hope to bring management and leadership qualities learned at UVA to serve our companies and help others.

Our fieldtrip to southern Pennsylvania will always serve as a reminder of the need for perspective. The business landscape sometimes aims to pull people, teams, and companies apart. As McIntire graduates, we strive to be thoughtful, ethical builders of business and society. At some point, all of us see our time in Rouss & Robertson Halls come to an end. We aim to embody the principles we learned on Grounds as we fight our own battles, and we invite you to do the same.

About the Mead Endowment
Founded in 2002, the Mead Endowment provides UVA faculty members who display “outstanding potential to become friends and mentors of students” with grants to create their own “dream ideas”—or opportunities to inspire students academically while building personal relationships in a setting that the traditional classroom cannot provide.