In advance of the legislation that is bringing changes to the Old Dominion’s cannabis regulation, we spoke to Seaborn about how it may affect the Commonwealth. 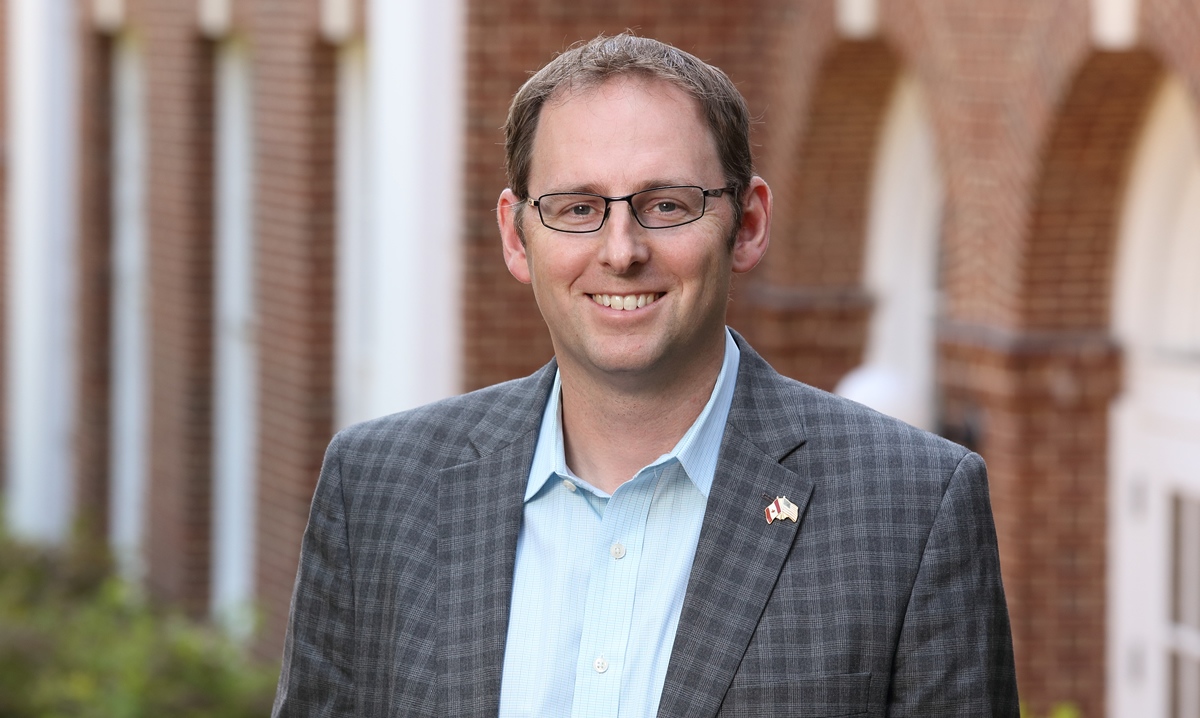 Timing is everything. For McIntire Professor Paul Seaborn, the veracity of that old proverb was confirmed back in 2011. It was then that his research and teaching interests—the intersection of business and government—conveniently became top of mind when he left Canada and took a job at the University of Denver. It was also when the medical cannabis industry was forming in Colorado.

“It was mostly just being in the right place at the right time,” he says.

A few years later, as recreational adult use was legalized in that state, Seaborn continued to be intrigued by lobbying efforts around the laws and regulations that would govern the new industry, ranging from policing personal use to establishing retail outlets, along with all of the other sundry pros and cons that were emerging with legalization.

Finding the complexities of the issues worthy of study, Seaborn designed and taught the first-ever Business of Marijuana course to be offered at an AACSB-accredited business school, launching it at the University of Denver’s Daniels College of Business in 2017.

“What creating the course helped me appreciate was all of the other aspects of the industry that are interesting to me—but are also quite important,” he explains. “There’s a big social justice aspect to legalization in terms of which groups are hurt most by the illegal status and which ones may or may not benefit when it becomes legalized.”

Beyond the social justice aspects, he found that he was impressed by the dedication of those leading the industry in Colorado, as they routinely displayed their willingness to take risks as pioneers in the field. Having forged connections with those impacting policy and statewide cannabis commerce, Seaborn was initially a bit reluctant to leave Denver for UVA, but that soon changed.

“I had a hope that the experience would repeat itself and that the legalization process would get going in Virginia. I didn’t expect it to happen so quickly,” he says in reference to the July 1, 2021, Virginia law that brings changes to the Old Dominion’s cannabis regulation. Come July, the state will legalize possession of up to an ounce of marijuana by adults 21 or older and gifting up to an ounce of marijuana to another adult, as well as legalize cultivation of up to four marijuana plants per household.

“Every time there’s a new state that’s going through this process, there’s a huge need for basic perspective on what it means and what it is, and also to hopefully learn from the experiences of other jurisdictions, including Colorado. I now feel like it’s kind of a neat place to be, to see this playing out again, but with the benefit of all that hindsight.”

In advance of the July 1 law taking effect, we spoke to Seaborn about the new legislation and how it may affect the Commonwealth.

Since you began studying the cannabis business, you’ve seen many states go through the typical growing pains when the laws change. Have you noticed any difference in how the subject is viewed from an educational standpoint over the years?
The stigma of the cannabis industry has diminished slowly, in fits and starts, and as a result, there’s definitely more academic interest and openness today—and not just within business schools. Typically, law schools and lawyers are first—that’s kind of the frontlines, because so many of those issues have to be figured out just to get a legalization initiative on the state ballot.

There’s also a lot of academic interest on the medical and health side. In California, a number of universities have established medical research institutes focused on cannabis that didn’t exist until the last decade or so. Then there’s a need and benefit from having business schools examine the issues. And there’s also an agricultural aspect to the industry.

Sometimes it seems surprising how slow academia has been to address this subject, but then you remember that cannabis is still federally illegal and nothing has changed at the federal level at all. All the change in the U.S. has been at the state level, and that puts everyone in an awkward position, including universities, so the slow pace makes sense. There’s still some uncertainty about finding the right path forward and how far to go.

What role do you believe federal laws will actually play in Virginia’s ability to make the most of the new stance on cannabis?
It certainly seems like Virginia is going to be moving forward before the federal government takes any action. There may be some slight change at the federal level, perhaps around banking restrictions. But it doesn’t address nearly the same scope of what Virginia is looking at and what all these other states—Illinois, New Jersey, Michigan, and Oklahoma, or whoever—have been pursuing in recent years, so I don’t see the federal government having a big impact in the short term in Virginia. That’s one of challenges for the states—they are basically putting their necks out with their own approach, without knowing what the federal government is going to do.

With every new state that legalizes cannabis for medical or adult use, it creates more uncertainty about how any future change in federal law will sync up with state cannabis programs. One option for the federal government will be to recognize and respect state decisions and basically stay out of most of the regulation, somewhat similar to how alcohol is regulated in the U.S., with significant differences between states. Another option would be to federally legalize cannabis and put a kind of national legalization across the board. But nobody really knows what to expect until the federal government gets moving.

Based on what you’ve seen in instances of other state legalization processes, how do you imagine July’s law change in Virginia will impact the Commonwealth economically, socially, criminally, or otherwise?
The July legalization has a lot of immediate impact for state law enforcement and for minority groups that are currently affected by the illegal status of cannabis at a disproportionate rate, but for the most part, it doesn’t really open up a commercial market in any way that would have any significant economic impact. That’s actually been a decision by the legislature and the governor to break it into steps.

But what’s still left to be done is a step of allowing for a commercial adult-use industry. And that’s not there as of July 1, so the impacts on the business side are still to come. But there will be some immediate impacts and freedoms that Virginians have, and presumably, some shift in how law enforcement prioritizes its time. My observation from other states is that you don’t want that period between legalization and establishing a commercial industry to go on for too long. It’s just not a very workable place to be, where you have legalized it but there’s no way for someone to purchase it.

Socially, attitudes towards cannabis tend to change fairly slowly, since it has been illegal and stigmatized for many decades. I don’t expect a significant change in Virginia until cannabis stores are open and visible throughout the state, and that is still likely years away. Medical cannabis was actually approved by Virginia in 2017, but the first medical dispensary didn’t open until late in 2020. We currently have only four medical dispensaries in the entire state, so the social impact of that change has been slow and minimal. Adult-use legalization should have a much bigger impact, but it will depend on the regulatory choices that are made.

Who do you think stands to benefit most from legalization, at least on July 1 as far as that process?
Those who in the past have been convicted of simple possession-related crimes, because that’s part of the process to expand those freedoms. It affects day-to-day freedom of choice, and it may, in some cases, seal or remove some past crimes on people’s records that are affecting their employment opportunities or other options.

One of the things I always like to think about when we talk about legalization is that cannabis is not magically going to fall from the sky in Virginia on July 1. It has existed in the U.S. and around the world for hundreds or thousands of years. So the choice is not between having cannabis in your state or not; it is a choice about how to handle it. It’s here now, and it’s going to be here after July 1, but it’s going to be legal and with certain risks and concerns removed. But then we’re still left wondering what it’s going to look like when people are able to go to a local cannabis store, whether it is the ABC cannabis store or a private retailer.

From a strictly business perspective, what positive aspects have made the case for legalization so compelling for state governments in recent years?
Initially, no one knew what to expect from legalization and commercialization, and there were a lot of concerns about what might go wrong. States like Virginia have had the benefit of having other states go first while everyone else just sat back and watched to see whether the sky would fall. The early states, such as Colorado and Washington, provide examples that life has gone on. They’ve had to sort through many new challenges around packaging, labeling, driving infractions, and impacts on the workplace and schools, but nothing to the point of really causing a reversal in the general trend towards legalization.

More recently, there has also been greater recognition of the economic impacts of legalization, both in terms of general business activity as well as direct tax revenue for state and local governments. Since Colorado legalized adult-use sales in 2014, total sales have exceeded $10 billion, and that has generated $1.7 billion in tax revenue for public schools and other government programs. At a time when state budgets have been hit hard by COVID, that additional tax revenue is increasingly attractive, although it can put state governments in a difficult position if boosting tax revenue is a primary motivation.

Finally, each time another state legalizes, it shifts the likelihood that a particular state is going to become a real national hub for cannabis companies and all of the innovation that comes with it. Colorado had a head start in that area, and some great companies have come out of the state, but there’s no guarantee that Colorado will necessarily be the long-term hub of the industry. It’s a smaller state, population-wise, and it’s not really close to the biggest cities. So, where the industry’s center will be or where the hotspots will be is still very much up in the air. It’s a brand-new industry, and things are still very much in flux. But if you’re the 45th or 50th state to legalize cannabis, it’s very unlikely to be your state.