We spoke to Schroeder about the gratifying aspects of founding a direct-care allergy clinic, the major challenges that come with the medical territory, and how McIntire prepared him for the many responsibilities of his work. 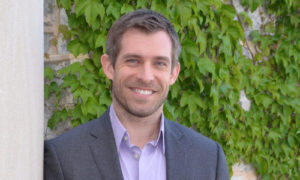 A veteran Marine who served overseas during Operation Iraqi Freedom and Operation Enduring Freedom, James Schroeder insists that going to McIntire wasn’t part of his plan when he first moved to Virginia.

His post-armed forces life began by working as a police officer near Madison, WI, where Schroeder met his wife, Nikhila; she was in her third year of medical school at the University of Wisconsin. Natives of the state, the couple needed to relocate to Charlottesville when she began her residency program at UVA. His arrival near Grounds presented a fork in the road of his life.

“I hit a decision point: continue on as a police officer in a new location or go back to school like I had always wanted to,” Schroeder recalls.

Originally planning to only earn an associate’s degree, he enrolled at Piedmont Virginia Community College, where he quickly surprised himself by his growing motivation and academic success. Learning of the opportunity to transfer to UVA and apply to McIntire, he and Nikhila made the decision to stay in town so he could pursue a Comm School education—a choice that turned out to be a transformative one.

“The relationships I developed and material I learned during my time at McIntire have greatly influenced my life. I learned I had so many different interests and wanted to pursue them all to some degree,” he says. Though he interned at PwC during his McIntire experience—and was offered a position with its DC office—the location and timing weren’t the right fit for him and Nikhila at the time.

His wife then took a role in La Crosse, WI, and the Schroeders moved to a nearby small town, where he found work with a digital marketing company startup, pursuing his IT interests and further developing many of the skills he would continue to use throughout his career.

During this time, Nikhila began working as an allergist at a clinic using a lesser known form of allergy treatment called sublingual immunotherapy (SLIT, or allergy drops). In the years that followed, the couple often dreamed about owning their own clinic and how to optimize the issues they were seeing in healthcare, “but never thought about it with any seriousness,” Schroeder says, “especially since we had just bought a house, adopted a dog, had two kids, and were attempting to settle down in this town.”

The decision to stay put didn’t stick. After several years in La Crosse, they grew dissatisfied with their current working lives and took the plunge to make their shared vision of optimizing allergy care a reality. In creating what they felt would be a sustainable business model that would allow them to found their ideal allergy care clinic, they ultimately made the leap of faith, moving to Charlotte, NC, and launching Allergenuity Health Associates.

We spoke to Schroeder about the gratifying aspects of his career, the major challenges that come with the medical territory, and how McIntire prepared him for the many responsibilities of his work.

What are your current day-to-day responsibilities like? How might you see your role changing as the clinic grows?
I work as a jack-of-all-trades for our clinic. The two things I love most are working with Nikhila to design each aspect of our clinic’s processes in our vision and going out to speak about our clinic. As the only two running and staffing the clinic at the moment, we both wear a lot of hats and collaborate on virtually everything.

My day-to-day responsibilities include things like building and maintaining our website, digital marketing, participating in networking and educational opportunities, answering phone calls and emails, scheduling patients, ordering supplies, keeping our financial items organized, filing our registrations, and much more. I also water the plants, vacuum, and clean our clinic space, including the bathroom. Sometimes I run out to get a special toy for a young patient so that they have something familiar to play with and feel more comfortable during their initial consultation.

It’s overwhelming how much there is to do in a startup medical clinic and without any staff to help. It’s not all glamorous, but it’s also pretty cool that it’s all ours, and we work and know every inch of it. My role will narrow a bit in the future, but for now, I like knowing all the ins and outs of our process and it will help me train incoming staff that much better.

How has your McIntire education helped inform the initial challenges of founding a direct-care allergy clinic? What Comm School experiences stayed with you when you were preparing to open Allergenuity Health Associates in July 2018?
The education I received at McIntire has been nothing short of astounding, and it really broadened my perspective on how to solve complex problems, but I actually don’t think the course material was the thing from the Commerce School that most prepared me to take on the challenges of founding our unique clinic.

The classes that probably helped me the most were my Communication courses. Professor Marcia Pentz was a lot of fun to work with in particular. She had a ton of energy, and you could tell how much she loved working with her students. She saw how uncomfortable I felt in class speaking in front of groups of people, and she would call on me to participate and challenge me to keep doing better with my writing skills. She encouraged me to open up in the ways I communicate with others and when speaking with anyone or in front of a group of people. I still try to incorporate all she taught me using things like “bottom line up front” and “stand-alone sentences”.

Your clinic is one of only two in the United States providing SLIT (allergy drops) treatment using a comprehensive approach and the only one using SLIT with the Direct Care model. What was Allergenuity’s reasoning for adopting this method of treatment?
During Nikhila’s pediatric residency and allergy fellowship, she was frustrated that there weren’t better treatment options available for allergic patients. Immunotherapy was a way to attempt to improve the underlying problem, but the only form of immunotherapy taught in allergy fellowship programs at the time was allergy shots, which had significant limits and risks. Allergy shots, which are invasive, painful, inconvenient, and come with the risk of severe side effects including anaphylaxis, can be used only in a subset of patients with environmental allergies—missing the youngest patients where there’s a potentially critical immune system retraining window, those with the most severe allergic medical conditions, and all those with food allergies.

Sublingual immunotherapy or SLIT—which uses a specially formulated liquid dropped in the area under the tongue—is not talked about much in the United States, but had been trialed for environmental allergies decades ago in Europe, with great success and safety, becoming a prevalent treatment in many areas there since the 1990s. This method of treatment also made a degree of intuitive sense to Nikhila, and she wondered if and how it could be also applied to treating food allergies. When asking her mentors about SLIT, Nikhila was told repeatedly that it wasn’t useful and wasn’t worth pursuing, but she decided to seek out more in-depth information for herself so that she could answer her own questions.

Nikhila found a clinic in the United States whose founder had also learned the European SLIT method and had adopted it in his own clinic for the past several decades, and she began working there. When Nikhila started putting SLIT into practice herself, she saw incredible improvements in her patients and remarked to me that she felt more useful to allergic patients in her first six months using SLIT than she had ever felt before. As she learned and experienced more with this treatment, it made no medical sense to her—or to me—why SLIT was not the first-line allergy immunotherapy treatment for people with environmental and/or food allergies. She found that SLIT was noninvasive, safe, effective, and much more convenient than allergy shots, and it could be used at any age, for treatment of environmental or food allergies, and in patients with any severity of allergic medical issues, including anaphylaxis. So that is why we have implemented SLIT as the primary form of immunotherapy offered at Allergenuity Health.

What’s been most rewarding for you about operating a clinic that functions outside of the typical insurance model?
It’s been really exciting for us to think differently, be creative and flexible, and most importantly, work directly with our patients. Health is such a personal thing. Operating in the direct care model (i.e., outside of the typical insurance model) has allowed us to return the therapeutic patient-physician relationship to its rightful place at the core of healthcare, which dramatically enhances the experience of everyone involved and improves the quality of medical service. We’ve disagreed with much of the business advice we received (all essentially steering us back to the typical insurance-managed healthcare processes) in order to create a clinic that is completely transparent and patient focused all around. Our engaged patients readily volunteer that they love what we are doing with health care, and it has been very rewarding to see that maybe we can still run a business while also doing things in our own vision which includes putting patients first.

What are the most pressing short-term challenges for your business?
The two biggest short-term challenges we face are being short on time and needing to educate the community on exactly what we do, since it is so different. We spend an immense amount of time every day working at the clinic, improving the clinic, or educating people on SLIT or the direct-care model, while also raising two toddlers, with both of us trying to be very active in their lives.

We also face two major uphill battles regarding community education: first in the misinformation being spread out there about SLIT—even by allergists (who often have no significant direct experience with it), and second, in the pressures within our society that erroneously equate health insurance coverage with health care. Many patients don’t realize that they have a right to choose their physicians any time they want and that they do not need to only see an “in-network provider.” As a society, we’ve been pressured into thinking that paying $350 out of pocket for five rushed minutes with an in-network provider is better (because it goes toward your deductible) than paying $350 for one dedicated full hour with an out-of-network, direct-care, board-certified specialist physician of your own choosing. It does take some effort to get to know different doctors and find a person’s best fit, but that effort up front can make a lot of difference in a patient’s care and outcomes over time, so it can be really worth it.

We’re hoping to get to a point where we can hire several staff members to help lighten the load of all the admin work we’re currently doing, and to create educational videos on the common questions we are frequently asked about SLIT and direct care. We’re happy with our choice to take things slowly, taking on these challenges one at a time, and grow at a rate we can more realistically handle, and handle well. Our main marketing right now is via patient word-of-mouth, and we’ve had consistent growth since we opened. With happy patients who provide positive feedback, we know we’re on the right path to building a better system for allergy care.