The highly cherished host for the M.S. in Commerce’s Southeast Asia Global Immersion Experience (GIE) in Vietnam is passionate about the McIntire School, its global vision of business, and its ability to offer transformative learning experiences for its students. 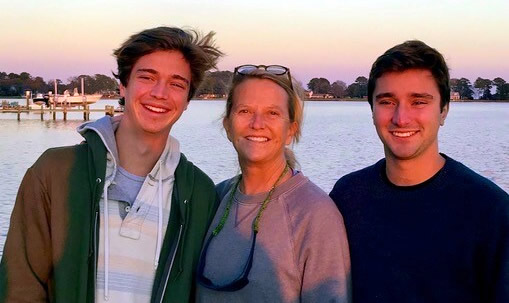 Lee Mason Baker with her sons, Grey and Ford.

Is it possible to be located on the other side of the world and stay an integral part of the McIntire community? If Lee Mason Baker is any indication, you sure can.

Located in Ho Chi Minh City, Vietnam, the alumna who majored in English and History in the College maintains strong ties to the University and McIntire that have only increased throughout the years.

A Principal and Strategic Advisor for LightPath Consulting Group, a boutique education firm in Ho Chi Minh City, Baker is also a highly cherished host for the M.S. in Commerce’s Southeast Asia Global Immersion Experience (GIE) in Vietnam; she has proudly welcomed students in her adopted country year after year for more than a decade (excluding, of course, the most recent travel-halted semesters that have been limited by the pandemic).

As a mother of two sons, Ford (A&S ’19, M.S. in Commerce ’20) and current second-year Grey (A&S ’23), she is passionate about the McIntire School, its global vision of business, and its ability to offer transformative learning experiences for its students.

Wish Fulfillment for Two
Here’s a good case in point: Baker remembers how she reacted when she first learned about McIntire’s M.S. in Commerce. “I so wish this program had existed when I attended UVA; I would’ve been first to apply!”

She enthusiastically recalls how she heard about the innovative program a decade ago. It was during a conversation with then McIntire Dean Carl Zeithaml, Associate Dean for Global Affairs Peter Maillet, and Director of Global Alumni & Friends Engagement Darci Spuck about the potential of Vietnam as a destination for the Southeast Asia GIE.

As a parent, she admits that her elder son Ford’s decision to apply to McIntire fulfilled a “not-so-secret dream” she harbored for nearly 10 years, dating back to the time when he joined a visiting group of Comm students while he was still in high school.

“Ford’s decision to apply came a bit late in the game, but he fit the same profile as I did all those years ago: a straight liberal arts major who enjoyed his course of undergraduate study (Foreign Affairs), but knew that he really wanted a job in the financial sector. His year at McIntire served to only enhance my connection to UVA, and gave me another excuse to visit Grounds last fall,” she says.

Baker notes that a general theme throughout Ford’s experience in the 10-month master’s program was the immense value-add to his undergraduate educational experience, and its ability to serve as a springboard to his chosen career.

“He voiced it over and over again, calling it the perfect bookend to his four years as an undergrad, and the absolute key to his obtaining his dream job with EY Consulting in New York City,” she says, recollecting that the M.S. in Commerce’s impact wasn’t limited to its academic strengths. Ford relayed that the assistance he received from McIntire’s Graduate Recruiting and Admissions team on the way in, and the help from Commerce Career Services upon graduating, significantly elevated the entire experience.

Making Access to Opportunities and Memories
Baker has been extremely instrumental in helping create opportunities for students on the GIE in Vietnam. So much so, that she says it’s difficult to narrow the many years down to touch on specific positive experiences.

“While the Southeast Asia GIE students have been annual visitors to Vietnam, I’ve been lucky enough to host the occasional J-Term group a handful of times as well,” she says. Her go-to social event, a concluding dinner reception, takes place at the Temple Club, a restaurant she co-owns. With its “rustic Asian art deco style” outfitted with furniture from the former French embassy in Saigon, she says, “it captures that ‘Indochine’ feel that visitors to Vietnam seem to want.”

The convivial aspects of the journey that Baker has so deftly facilitated are likely one of the reasons GIE students always rank Vietnam so highly. But like all GIE trips, crucial learning forms the bulk of the time spent, much of it facilitated through meetings with executives and policy leaders.

Baker actively helps organize the student groups’ many corporate visits across Ho Chi Minh City. As a resident and business leader in Vietnam for more than 25 years, and having spent time as a Board of Governors member on the American Chamber of Commerce in Vietnam, she has her finger on the pulse of industry, leadership, and trends.

“What’s easy for me, and generally hard for the faculty trying to manage this from afar, has led to my being entrusted with arranging the entire week for the group in recent years—with guidance, of course, regarding the types of companies sought. I love doing this, and with Vietnam such a dynamic economy in transition, the visits change up every year,” she says, noting her disappointment that the visit was postponed in 2020 due to COVID-19, but remaining positive about planning for the future.

Fully on Board
With Ford now an alum and her role as a longstanding host temporarily on hold, you might assume that she would be less engaged, despite younger son, Grey, studying as a current second-year. You would be wrong.

A strong supporter of the Global Opportunities Scholarship, as well as other instances of Commerce School philanthropy, Baker insists her inspiration to give to the scholarship in particular was fully due to former Dean Zeithaml.

“Any fund or giving destination associated with his name is worth it in my book. Such a visionary, with an understanding—well before most—of the importance of international engagement for U.S. higher education,” she says. “Couple that with the fact that the funds will be used to defray travel costs for students participating in McIntire global experiences, and you’ve got a scholarship that falls directly in the crosshairs of this expatriate supporter of McIntire’s international initiatives.”

Additionally, Baker recently increased her engagement with the School further by becoming a member of its Global Advisory Board.

She says that she was both “quite surprised and honored” to have been asked to join McIntire’s Global Advisory Board, and accepted the invitation without a moment of hesitation. As a member who is not a graduate of the Comm School herself, Baker was particularly appreciative of the opportunity to have the chance to serve in a more formal role.

Baker believes that the Commerce School has become the University’s flagship school for international engagement and is intent on doing her part to contribute to that success.

“I want to do all I can to build upon that momentum in Asia generally, and Vietnam and Southeast Asia in particular,” she says.

Excited to help the Commerce School grow its brand recognition as a top U.S. undergraduate business school, she is keen to extend that attention for what she sees as the uniqueness of its M.S. in Commerce, too. As such, she’s optimistic about what she can lend a hand in achieving for the School: “I hope to contribute to Dean Jenkins’ efforts to ensure that the McIntire curriculum stays innovative, skills-based, and relevant in today’s interconnected, global, commercial world.”

So just how close does Vietnam seem to Virginia for Baker now?

“I certainly feel connected and informed about the McIntire legacy and mission, given my involvement over the past 10 years. At least now I have an ‘official’ connection,” she says, noting that her role as a Global Advisory Board member has already afforded her with great insights that she plans to share with Grey, another aspiring McIntire student.