Currently Vice Dean of the Gatton College of Business and Economics at the University of Kentucky, Jenkins will succeed longtime McIntire Dean Carl P. Zeithaml. 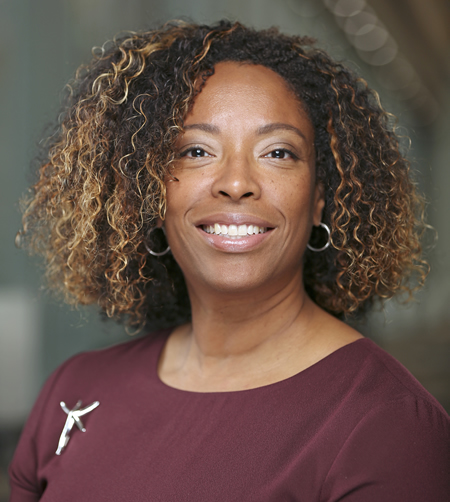 The University of Virginia today announced that Nicole Thorne Jenkins has been named the next Dean of the McIntire School of Commerce, effective July 1, 2020.

Jenkins is currently Vice Dean of the Gatton College of Business and Economics at the University of Kentucky, where she is also the Von Allmen Chaired Professor of Accountancy. She was previously on the faculty at Vanderbilt University and Washington University in St. Louis.

“Nicole is a forward-looking leader with a deep understanding of how business and business education are changing. She is energized by finding creative responses to these challenges and brings the deep operational knowledge needed to translate innovative ideas into institutional realities,” said UVA Provost Elizabeth “Liz” Magill. “Nicole is well-positioned to continue McIntire’s tradition of innovation and to lead the School’s next chapter of success.”

Jenkins has been a member of the faculty at Gatton for the past eight years and has served as Vice Dean for the past four. In this role, Jenkins has managed a broad portfolio, overseeing all faculty, academic departments, diversity and inclusion efforts, and the school’s research enterprise, in addition to finance and budgeting, IT, HR, and alumni relations.

“Nicole is an outstanding scholar, an exceptional leader, and a valued colleague,” said University of Kentucky Provost David W. Blackwell. “I had the pleasure of working with her when I served as Dean of the Gatton College of Business and Economics, and I have continued to be impressed by her productivity in research, her servant leadership as an administrator, and her commitment to her students. I’m confident that the University of Virginia’s McIntire School of Commerce will have a bright future with her as Dean.”

Jenkins also has a wealth of industry experience, having started her career at Coopers & Lybrand before spending four years at Price Waterhouse LLP (now PwC), where she helped take high-tech and biotech firms public, and audit them afterwards.

Jenkins will succeed Carl P. Zeithaml, who announced last year that he would be stepping down from his position as Dean at the end of the academic year after 23 years. Under his leadership, McIntire has grown into one of the nation’s preeminent business schools. Last year, McIntire was named the nation’s #3 undergraduate business program by business education website Poets&Quants, and its M.S. in Commerce Program was lauded as the nation’s best and #6 worldwide by The Economist.

“I am incredibly grateful to Carl Zeithaml for his leadership of McIntire over more than two decades, as well as for his advice and counsel—including during this pandemic,” said UVA President Jim Ryan. “Carl has transformed McIntire, and I firmly believe that Nicole has the talent and experience to build on that legacy and lead McIntire to even greater heights. I very much look forward to working with her.”

“My family and I are excited to be joining the University of Virginia community and look forward to moving to Grounds in the near future,” Jenkins said. “As a leader in business education, the McIntire School of Commerce has a well-deserved reputation for excellence built upon a foundation of uniquely designed and rigorous programs, an accomplished faculty, a highly skilled administration, and exceptional students. It is my privilege to join this outstanding community and collaborate with them to build upon the many points of pride that are the McIntire School of Commerce and UVA.”

Over the last several years, Jenkins—an award-winning teacher—has provided leadership on the formulation of joint degree programs in collaboration with the schools of Arts & Sciences and Engineering, as well as international partner universities. She has also helped to develop new undergraduate, M.S., and certificate programs at Gatton. Throughout her career, Jenkins has worked to make business education more diverse and inclusive, launching targeted recruiting efforts and mentoring programs for women, first-generation, and underrepresented students.

“Nicole’s talent for fostering communities in which all members feel a sense of belonging and support stood out to all of us involved with the search,” said search co-chair Professor Amanda Cowen. “It is also clear the importance that she places on collaborative partnerships between faculty, staff, students, alumni, and the broader university. These values make her a wonderful fit with the McIntire culture and a great choice to lead our community.”

During her tenure as Vice Dean, Jenkins spearheaded the college’s strategic plan, and designed and implemented a new college-wide financial reporting system. She also facilitated the creation of new vehicles for alumni engagement and was instrumental in fundraising for scholarships, staff development, and faculty research. These research funds have supported new hires, research grants, and initiatives to boost the external visibility and impact of faculty research.

“Nicole is a brilliant choice,” said Simon Sheather, Dean of the Gatton College of Business and Economics. “She is a transformational leader, mentor, and friend who brings a diverse set of experiences to this deanship. Nicole has been an important voice, and source of ideas and inspiration, to me in my two years here at the University of Kentucky, and I am confident that she will bring that same vision and set of skills, and more, as Dean of the University of Virginia’s McIntire School of Commerce.”

“Nicole believes that fostering research and building thought leadership is central to the mission of top business schools,” added Rick Netemeyer, the Ralph A. Beeton Professor of Free Enterprise and a member of the search committee. “She is excited about continuing to elevate McIntire’s research profile and to supporting high-quality work that impacts academia, industry, and society.”

Jenkins is a Maryland native who developed her interest in business early on. She grew up working on her family’s farm and for her parents’ trash company. From the age of 10, she was responsible for billing customers, processing deposits, and preparing documents for auditors.

Those experiences later led Jenkins to earn a Ph.D. in Accounting from the University of Iowa, where she participated in the PhD Project, a national program founded to increase the diversity of business school faculty. She remains engaged with the program, now serving as a mentor and adviser to future generations of business professors. Jenkins’ own research focuses on financial reporting failures and share repurchases.

“We are thrilled to welcome Nicole to the McIntire School and the broader UVA community,” said Board of Visitors member and President of the McIntire Foundation Board John A. Griffin. “As McIntire approaches its centennial anniversary, Nicole brings invaluable experience from both the industry and academic worlds and will lead us forward as we build on our reputation as one of the best business programs in higher education.”

Jenkins will be joined in Charlottesville by her husband, Toby, a couples and family therapist and executive coach, and their daughter Zoe, 16, and son Eli, 14.