Both student-athletes note the positive impact of preparing and competing on how they approach their academics and their athletics. 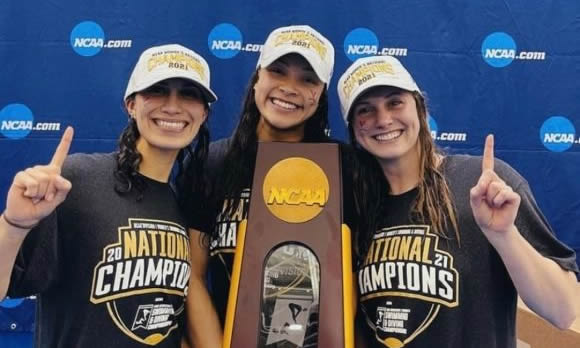 In 2020, UVA’s Swimming and Diving team was primed and ready to compete for a national title before their season was abruptly cut short due to the pandemic.

“It was really hard for us as a team,” says Julia Menkhaus.

Jess Nava, her teammate, says that their 2021 campaign was made all the more difficult because of the uncertainty surrounding the future of the ACC and NCAA Women’s Swimming and Diving Championships. No one knew if they would actually be held.

“In a normal year, when we’re getting up for an early lift or in the middle of a really hard workout, one thing that really helps us push through is thinking of the end of the season. This year, though, when we were in those situations, it was significantly harder to push through because we had no guarantee that we would even get an end of season,” Nava says, explaining how the team put in the effort, resigned to the fact that there might have been nothing to show for their entire season of work.

But, as luck would have it, both competitions continued as hoped. And the results of their endeavors were nothing less than two victories, the second representing the first national title in UVA program history.

Success didn’t come easy, and it wasn’t accomplished without a few initial failures. Menkhaus says that because swimming is very much a results-oriented sport designed around meeting outcome expectations, failure is unavoidable.

“It’s rare to get best times frequently. But I think what we’ve learned is that the most important part of college swimming is always doing it for your team. Time outcomes aren’t important, and learning to adjust your mindset to regard these failures as learning opportunities is a big part of reaching your goals.”

Nava believes that she was particularly driven, as she scored fewer points than she had hoped in her initial NCAA championship appearance as a first-year. “At the time, I was just so happy that I qualified for the meet, I wasn’t as focused as I should have been in regards to training. At a meet like NCAAs, every point counts, and I wanted to do everything I could to help us reach the goals we set.”

The pressure to excel—despite difficulties—is also indicative of lessons both teammates took to heart.

Performance Priorities
Both student-athletes note that preparing and competing have had a positive impact on how they approach their academics and their athletics.

“The most important thing I’ve learned as a student-athlete that has helped me as a student is goal setting and mapping out how to reach those goals,” says Nava. “From a young age, I always loved setting goals in swimming, but it wasn’t until I got to college that I began setting goals for my academic career. My first major goal that I set once I got to UVA was getting into McIntire.”

Menkhaus says that being competitive in the pool for UVA has taught her to be disciplined in all aspects of her life. “There’s a lot of pressure that comes with the expectations of having to perform athletically and academically. So I would say learning how to handle that pressure in a healthy and productive way has been a learning curve for sure, but a good one.”

While playing a sport and balancing their individual Commerce School workloads proved challenging, Menkhaus learned to prioritize and accepted that she had to make sacrifices to reach her accomplishments both in the pool and the classroom.

“It’s about being self-aware, knowing my own strengths and weaknesses and how to incorporate that knowledge to get things done. A lot of days, there isn’t a minute to spare, so a lot of time on the weekend is allocated to getting ahead on work,” she says.

For Nava, being able to navigate the fact that her interests can potentially get in each other’s way has been part of the process: “As a student-athlete, I’m constantly juggling a lot of balls, so the approach that I take to managing it all is accepting that sometimes a ball is going to drop, but making sure it’s not always the same one. I do my best to manage my time well, but sometimes there’s just not enough time in the day and that’s OK!”

From McIntire to the Future
Menkhaus is thankful for her UVA and McIntire experiences giving her “the best of both worlds,” saying that it’s a special honor to represent the University athletically and the Commerce School academically.

Nava agrees, citing Professor Jeremy Marcel’s Strategy classes from her time during the Integrated Core Experience as some of the most interesting coursework she’s enjoyed thus far. “They’re always entertaining, challenging, and practical! I also appreciated the fact that Professor Marcel was always willing to help his students think through things rather than just telling them what to think,” she says.

Professor Jeff Lovelace’s Leadership across the Disciplines course stands out to Menkhaus for both the material and Lovelace’s zeal for teaching it. “He was such an incredible professor. Not only was the course interesting, but he was also engaging and I could tell he was so passionate about the work he was doing,” she says, noting his strong support of the swim team. “Our sport is often overlooked, but he would go out of his way to make sure we were recognized. It had a very positive impact on me.”

While both student swimmers are still considering their professional options after they graduate next year, Menkhaus has started along the path to a career in consulting while keeping an open mind about the possibilities available to her. Nava is unsure as to her destination, but is enthusiastic about the journey to discover it.

“I’m interested in so many different areas of business, and I’m excited to explore all of them and find what I’m best at,” she says.

As for the future and next year, their final one both on Grounds and with UVA Swimming and Diving, they remain focused on the team’s success.

“We’re in a really good place right now, and we’re only getting better,” says Menkhaus. “Winning another national title is definitely something that were determined to achieve next year, and I can’t think of a better way to finish my swimming career than accomplishing that with my teammates.”

Nava, too, expects her last go-round as a competitive swimmer to supply her with more positive experiences that will become great UVA memories of when she and her friends were trying to do their best in the pool.