M.S. in MIT Event Explores Innovation at the Fed

The M.S. in MIT Student Council event welcomed guest speakers Ghada Ijam, Chief Information Officer for the Federal Reserve System, and Sunayna Tuteja, the Fed’s first-ever Chief Innovation Officer, who explained the organization, how it functions, and how they are driving change across it. 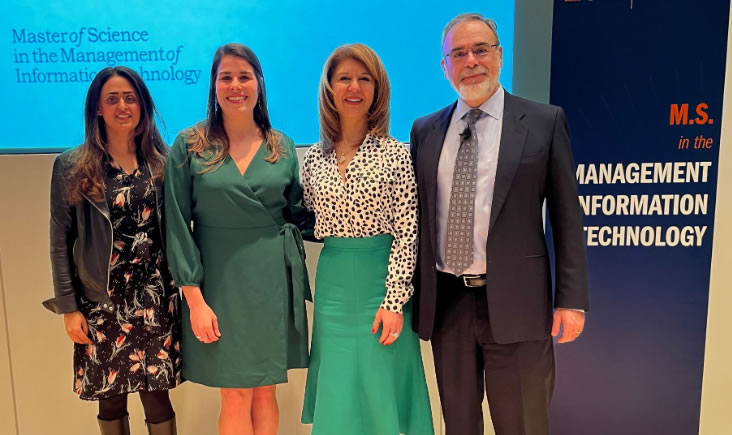 The U.S. central bank is well known for leading monetary policy but may not have a reputation for implementing new ideas or rolling out new services quickly. But an insightful discussion about innovation at the Federal Reserve System held at the McIntire School of Commerce certainly changed that perception.

Hosted at McIntire’s Tysons Corner location in Northern Virginia, the M.S. in the Management of Information Technology (M.S. in MIT) Student Council event welcomed guest speakers Ghada Ijam, Chief Information Officer for the Federal Reserve System, and Sunayna Tuteja, the Fed’s first-ever Chief Innovation Officer, who explained the organization, how it functions, and how they are driving change across it.

The conversation represented the intersection of technology and business strategy for which the M.S. in MIT Program is known, and for Sanders, it was also an opportunity to combine her professional and academic lives through the exploration of a significant topic.

“The subject comes up almost every day in news stories and impacts all industries. It’s particularly prevalent as storied companies and institutions, like the Fed, attempt to keep up or keep out digitally native disrupters. Sunayna holds unique perspectives as both a disruptor and now as a part of a seemingly monolithic institution,” she says, referring to Tuteja’s more than 10 years of experience leading change and innovation at the nexus of finance, technology, and policy.

Despite the fact that Sanders is employed at the Federal Reserve Bank of Richmond, she admits that since she doesn’t work within the IT organization of the Fed, a good deal of the information disclosed in the conversation was as new to her as it was to the rest of the attendees.

“I was learning almost as much as my classmates. Both Ghada and Sunayna shared compelling examples of how the Fed is dynamic, agile, and thinking creatively about some of the world’s most challenging problems. The Fed can have a reputation of being closed-off, and they did wonders for shifting that perspective with their candidness and excitement. It also wasn’t lost on me the power of two women of color in such high-profile technology roles,” Sanders says, explaining that the event served to enhance what she and her peers are learning in the M.S. in MIT Program, since the practical, real-world examples the two leaders detailed directly reinforced the coursework.

“As students, we consider the challenges of digital innovation and transformation, but they helped provide us with context about scale, stakeholder considerations, and more. It also provided a tangible example of how mature companies can still create relevancy in today’s environment,” she says.

Ijam and Tuteja briefly defined the Fed’s system of 12 independent and interdependent reserve banks that collaborate with a Board of Governors in Washington, D.C., to serve their communities, focus on research, and represent their districts to influence the direction of monetary policy.

As System CIO, Ijam, who served as the Fed’s Chief Operating Officer for National IT; as CIO at Amtrak; and in a variety of roles for Intel, Fannie Mae, Freddie Mac, and U.S. Bank throughout her more than 20 years of experience, works across the 12 districts to establish a universal strategic plan for the Fed to advance technology and serve its mission. She noted that they also support the Treasury Department, running many of its IT services, as well as the Fed’s supervision and regulation, “an important function to keep the stability of the financial system,” she says. “Both Sunayna and I make sure that we advance a common technology strategy and advance innovation for the Fed.”

Tuteja, who had been working in the crypto ecosystem for five years before taking a position at the Fed, recounted how she tells her connections in the Bitcoin world—to their disbelief—that “the central bank is not at all central; it is by far one of the most decentralized institutions I have worked for. The Fed is more aligned to the DeFi ethos than the mammoth central bank,” she said, detailing a workforce that includes thousands of technologists. “We have app developers, we have UX designers, we have scrum masters, we have data scientists, and cybersecurity.”

Ijam relayed the journey that led to defining and developing a three- to five-year strategic plan in digital transformation after joining the Fed in January of 2020.

“It’s not just technology—we’re going to change how we deliver technology, moving more towards an agile- and product-aligned model. We’re changing the skills as a result, because you cannot deliver new technology without upscaling the talent. We’re going to use data and analytics in a much more disciplined way.”

Tuteja, who began working at the Fed in February of 2021, explained that it was necessary to decouple technology from innovation in order to change the organization’s mindset. She offered three tactics for moving forward: “First, innovation starts with finding the right problem statements. Where there’s friction, there’s opportunity for disruption. Second, interrogate that problem statement with an obsession for the customer. For the Fed, our customers are the U.S. consumer, global counterparties, global regulators, and financial institutions—a plethora of constituents we serve. Third, future-proof our value proposition through innovation. We have to operate with a healthy sense of paranoia that we’re not immune to the volume, velocity, and variety of changes happening around us. Any innovation that we do has to solve problems, make the life of the end customer better, and help to create a better, tighter moat around the value proposition that the Fed offers.”

After the two executive speakers offered context around the functionality of the Fed and related their own experiences in the organization over the last two years, Ijam and Tuteja fielded questions from members of the audience who were eager to hear their points of view on a variety of related topics.

McIntire Professor Stefano Grazioli found the energy during the event exceptional. “It was inspiring to see one of the most influential financial organizations in the world articulate how they intend to modernize and innovate their IT operations and make them faster, more efficient, and in tune with the demands of the many stakeholders that they serve,” he says.

“These considerations were a perfect match for the interests and the capabilities of the M.S. in MIT students and alumni. The program analyzes in depth the process of digital transformation and digital innovation in its many business and technical facets,” Grazioli affirms. “M.S. in MIT graduates are precisely the kind of capable managers that digitally transforming organizations such as the Fed need: managers first, with a deep understanding of how modern technology and digital innovation work, and with an unwavering focus on how digital innovation brings business value to the organizations, the customers, and the constituencies they serve.”