Center for Global CommerceCenter for Investors and Financial Markets 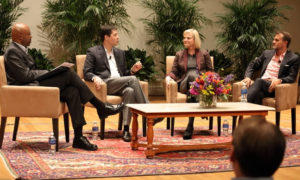 Panelists discuss what it means to compete in Europe, during McIntire’s 2016 Fall Forum.

The McIntire School of Commerce examined the challenges facing the European Union—including the evolving reality of Brexit, stresses on the Euro, and invigorated nationalism—and their implications for investors and industry during its 2016 Fall Forum Oct. 14. The event, titled “Europe at the Crossroads,” took place in UVA’s Old Cabell Hall Auditorium and was presented by the McIntire School and the McIntire Center for Global Commerce.

“Europe faces a set of challenges that, one could argue, are testing the very existence of the European Union,” said McIntire Dean Carl Zeithaml. “The McIntire community thanks this exceptional group of investors and industry leaders for sharing their thoughts and expertise with us on this important topic.”

Understanding the Crossroads
Chris Shumway (McIntire ’88), Founder, Shumway Capital, and Visiting Lecturer, McIntire School of Commerce, and Peter Maillet, Associate Dean for Global Affairs and Lecturer in Global Strategy and Finance, McIntire School of Commerce, began the event with a conversation about “Understanding the Crossroads,” setting the contextual stage in Europe.

“The idea of a European union isn’t new—it’s been around for some time—about 70 years,” Maillet said. “So we must be careful about jumping too quickly into a mindset that tells us everything is doom and gloom. Somehow, Europe has worked its way through this experiment for a very long time.”

Shumway described how, while at Tiger Management, he traveled to Europe when the Euro was being formed in the 1990s to explore investment opportunities. “It was interesting to see a very emotional case for the Euro,” he said. “When we got there with all the facts and figures, we said, ‘If you put this together, you’re going to have economies combined in a monetary union without being combined in a fiscal union. The math doesn’t work.’”

The policymakers agreed, Shumway told the audience. “They said, ‘This isn’t about math,’” Shumway noted. “‘This is about hope and change for Europe. We’ve been trying to combine, and ultimately, we’ll get there, starting with a baby step of a monetary union to a fiscal union.’”

The architects of the Euro expected we would arrive at a crossroads, Shumway explained, but also thought that 15 years forward, the process of fiscal union would have begun. “Brexit was the first shot across the bow.”

Brexit, Maillet remarked, seems to be a repudiation of the European superstate, seen as encroaching on the sovereignty of the UK.

“I would agree in part,” Shumway said, “but where I disagree with a lot of the commentators is that I am of the view that leaving was the right decision for the UK, economically and emotionally.”

In response to Maillet’s concerns about Brexit being a sign of the future configuration of Europe, with the increasing momentum of nationalistic movements throughout the continent and disparate levels of productivity among EU countries as stumbling blocks to union, Shumway emphasized the importance of having hope. “I believe you need to have a positive view of the future,” he said.

At the same time, in the next five years, Shumway envisioned a fiscal test, in which significantly increased transfer payments are made from the core EU countries to the periphery. “We’ll be stumbling through with a lot more transfer payments, but it won’t look that pretty,” he said.

“It depends on which part of the UK you’re talking about,” said Vasan, who remarked that the current UK cabinet is the most “anti-City-of-London” cabinet assembled in recent years. “The basic premise is that ‘we’ve got to decrease our dependence on financial services’ and therefore start stimulating manufacturing,” resulting in cities like Manchester and Birmingham gaining more prominence relative to London, he said.

In the long run, Vasan opined, Britain will be OK. “The main reason is because it has its own currency.”

Manufacturing for the UK market may benefit, Tadler said, but “I think it’s actually much worse for the UK, because the real driver for the UK is financial services. The downside of Brexit may be significant.”

From an investment perspective, Harper painted a bold case for post-Brexit UK and the London real estate market. “Pre-Brexit, you had capital coming in from all over the world, rising prices, and people building buildings,” Harper said. “Post-Brexit, you have falling prices and interest rates, new development stopping, less optimism, and a cheaper currency. Somewhere in there, it feels like there may be interesting investment opportunities.”

“In my mind, Brexit is not good for Britain or Europe,” Tadler said. “People see themselves as part of Europe now. It’s a central part of how they see themselves, young people in particular. I think they’re pretty committed to having it work, and they’re going to make it hard for the UK.”

“The generational impact and technical impact are at play here, in both Europe and the United States,” Finke said. “In Europe, the intellectual and technology industries are driving much of the growth. The demographic trend of millennials worldwide moving to urban areas and city centers is the counterbalance to some of the downside London will feel and the UK in general. Intellectual capital, highly educated, technical skills will be the foundation for a lot of [European] countries to sustain themselves in the future.”

Looking ahead, Tadler and Harper agreed that the EU will “muddle through” the next five to 10 years.

“Unless there’s a global crisis, which I don’t see in the fundamentals,” Tadler said, “I’m hopeful they’ll figure it out.”

Vasan warned that relative stability will continue to be absent in Europe. “I think the muddle-through scenario takes place,” he said, “but you will have event risk continuously in Europe.”

“It’s very hard to predict what’s going to happen, whether it’s geopolitical or macro,” Fiske said. “For us, it’s a matter of picking value, staying diversified, and trying to look to manage through the cycle.”

Switching gears from investor perspectives of the EU, Harris asked panelists to explain what it means to compete in Europe.

Gray noted that multinational beverage and brewing company AB InBev must navigate market by market. “Doing business in Europe is very different than a lot of markets,” he said. “It’s not the ‘United States of Europe.’ There are different laws, consumers—it’s entirely different from country to country. It’s hard to be as profitable if you’re not careful.”

Carter agreed, describing Hilton’s asset-light strategy. “We’re not owners; we manage franchises,” he said. However, he told the audience, the decreased risk to Hilton’s assets is accompanied by an increased risk to the global hospitality company’s brand. “We must take into account geopolitical factors and ask, ‘Who owns the asset?’”

Sawdye, on the other hand, acknowledged that government regulation is “somewhat how PwC makes money,” and that the regulatory environment in the EU is “generally a net positive” for the company, which provides audit and assurance, tax, and consulting services.

The discussion then turned to the topics of mobility, local sovereignty, and free trade throughout the EU.

“We thrive on the free movement of labor,” Carter said, adding that a slowing of that movement and the diminished availability of a trained workforce “would be a real issue” for Hilton.

The younger population is extremely important to AB InBev, Gray said. “They see themselves as more European than maybe their parents do,” he said. “If you have a young population moving from urban center to urban center, you can take the brand more ‘pan European.’ You don’t have to think local everywhere.” That said, the company “really must convince” its workforce to move for career advancement, he noted.

Sawdye pointed out that the average age of PwC’s workforce is 27 and that its highly skilled, highly educated employees want to be mobile. Like Finke in the first panel, she also emphasized the importance of technology. “If everyone becomes nationalistic, the only way we are going to prevent significantly eroding margins is to improve productivity, which means significant investments in technology,” she said. “I think one of the ways out of this glum state is significant improvements in technology that can be taken advantage of worldwide.”

In spite of increased regulation, slowed movement, and invigorated nationalism as headwinds facing the EU, the panelists said they remain “cautiously” optimistic about the future of the continent.

“We’re going to muddle through,” Gray said. “I still think there are great opportunities, but you need to select them very carefully.”