For the second year in a row, a team of McIntire undergraduates was triumphant at the Darden @ Virginia Investing Challenge (DVIC), winning a first-place prize of $4,500 at the seventh annual edition of the event. 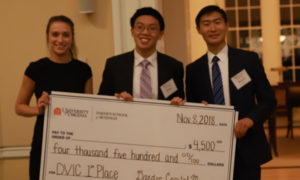 For the second year in a row, a team of McIntire undergraduates was triumphant at the Darden @ Virginia Investing Challenge (DVIC), winning a first-place prize of $4,500 at the seventh annual edition of the event held Nov. 8.

McIntire Finance Professor David C. Smith noted the added significance of the repeated achievement: “I was all the more impressed that Anna Venetianer was on last year’s winning team as well. She’s an investing rock star,” he said of the extraordinary victory for any team.

Held in conjunction with the University of Virginia Investing Conference (UVIC), the 2018 version of DVIC recognized the 10th anniversary of Lehman Brothers’ bankruptcy and the financial crisis by following the theme, “Defensive Stocks to Hold in a Downturn.” The challenge asked teams to choose a company that they felt was a strong defensive position to stay with during a market downturn.

This year’s team from the McIntire Investment Institute, a Commerce School student organization that recently surpassed an unprecedented $1 million of assets under management, pitched Zoetis, a Pfizer spinoff company that develops name-brand pet medicines and vaccines.

“The crux of our thesis was that not only has the animal healthcare industry been experiencing robust growth, but it’s actually completely recession-proof in the case of a downturn due to the fact that pet care has become a consumer staple as opposed to discretionary spending,” Venetianer explained. “Moreover, within this defensible and high-growth industry, Zoetis is the clear industry leader, holding more than 20% market share, with many of its products lacking any direct competition.”

Regarding her continued success at DVIC, Venetianer believes the results are a mix of luck and hard work. “The theme of the competition is released 10 days in advance,” she said. “Given that we’re at an inherent disadvantage being undergrads, I think both years we went in with the mentality that we had to work twice as hard to make up for what we lacked in age and experience. We worked nonstop to prove ourselves against some of the top M.B.A. programs across the country, locking ourselves in the Comm School from morning until midnight those 10 days to perfect our research, theses, and presentation—but that hard work definitely paid off. It really goes to show that, despite being undergrads, McIntire truly prepared us well in terms of work ethic!”

For Lin, being able to present at DVIC was a unique experience that allowed him to challenge his investment skills and apply what he has learned. “This experience shows how much you can accomplish at an undergraduate level at McIntire, and is a testament to the strength of McIntire’s professional organizations and student groups like MII in preparing students for these competitions.”

Smith was equally excited by the results, crediting the winning students for their abilities and echoing Lin’s sentiment that the Commerce School’s student clubs offer undergraduates an ideal platform for learning and testing their skills.

“I think it’s great that an undergraduate McIntire team can enter this competition and do well against M.B.A. teams from around the nation, but for McIntire to win two years in a row really demonstrates the investing acumen, analytical expertise, creativity, and presentation skills of our students,” he said. “Kudos should also go out to the student clubs like the McIntire Investment Institute, Alternative Investment Fund, and Smart Woman Securities, which provide much of the early training in finance for students like Anna, Nathan, and Richard. The clubs also serve as incubators for many outstanding investment ideas.”

Upon graduation, both Venetianer and Lin are slated to join hedge fund Point72 Asset Management L.P., where they will continue to test and develop their investment acumen.

The competition serves as a stellar learning experience and “an enormous amount of fun,” Venetianer noted. “I get to hear other teams’ pitches and meet a bunch of cool professors, students, and experts across the board. Hopefully, UVA can send a team next year to continue carrying on the dynasty.”