Since 2013, the Promotions class has placed in the top three of the National Student Advertising Competition five times, taken the best research award three times, and now earned the Best Presenter Award as well. 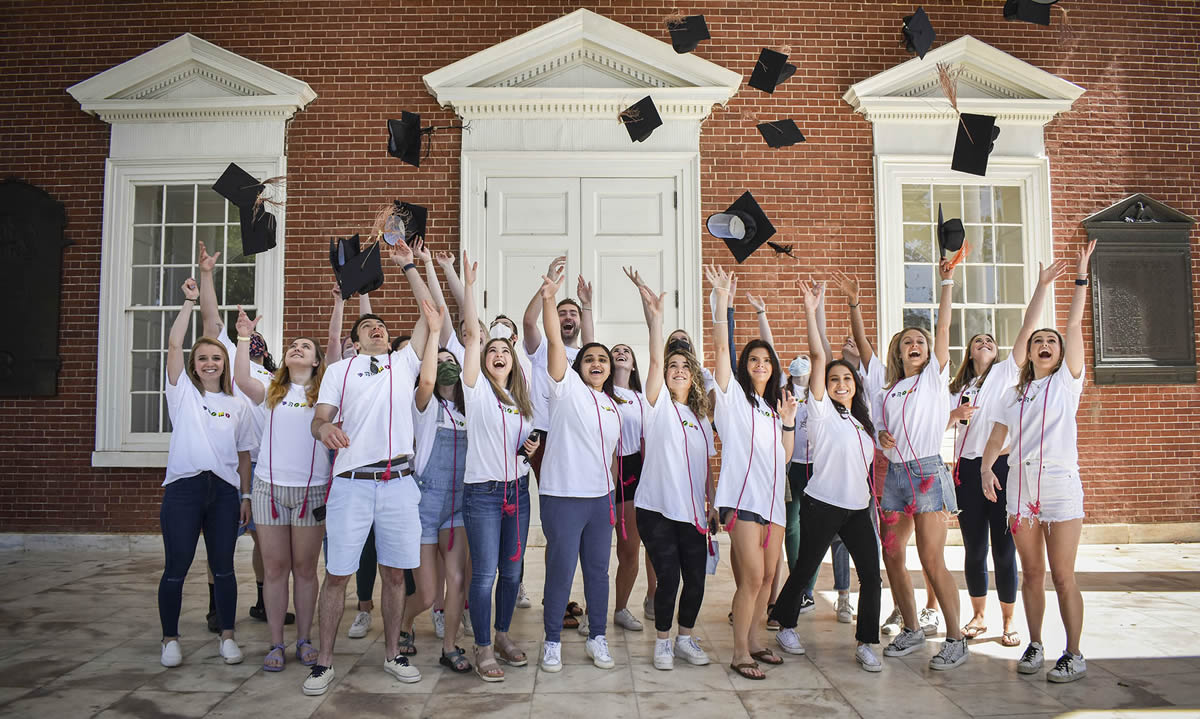 Like last year’s event, the 2021 competition was held virtually–but that didn’t stop students from celebrating on the Lawn. (Contributed photo)

For the second consecutive year–and a record fifth time in the history of the American Advertising Federation’s National Student Advertising Competition–students enrolled in the University of Virginia McIntire School of Commerce’s Promotions course have claimed the top spot.

Taught by McIntire Professor Carrie Heilman, Promotions is a longstanding Commerce School course that challenges students to take a deep dive into market research over the course of two semesters, during which they learn to employ focus groups, surveys, interviews and other research techniques, with the ultimate goal of developing an integrated marketing campaign for a national client. The entire course builds up to the American Advertising Federation’s flagship student competition, which involves more than 2,000 college students annually, each team creating a “strategic advertising/marketing/media campaign for a corporate client.”

The 47th edition of the National Student Advertising Competition, which took place last week, marks only the third time in the history of the competition that a team has won back-to-back victories, and the first in 24 years; UVA joins the University of Western Florida (1996 and 1997) and The University of Texas at Austin (1975 and 1976).

Outperforming more than 90 other teams nationwide, the McIntire team bested the competition in district and semifinal rounds to make the “elite eight” at nationals with their “Open to It” campaign for this year’s client, Tinder.

In addition to clinching the title, the team earned the MRI-Simmons “Inspired by Insight” Award for the second successive year, which recognizes the team with the best application of research demonstrated in both their presentation and pitch book.

A third piece of recognition came to May McIntire graduate Ana Stanisavljev for her outstanding presentation skills. After earning the competition’s District 7 Best Presenter Award, she credited her teammates for their invaluable support in helping her prepare.

“This victory was a total team effort,” said Heilman, the team’s faculty adviser, who took over the course in 2013 from the late Commerce professor and former adviser Jack Lindgren. “Beyond the hard work of the students, we are grateful for Instructional Technology Specialist Jane Pace, who teaches the students Photoshop and InDesign; Director of Media Development Al Hoover, who teaches the basics of video production; and the Promotions alumni–they do everything from hosting us on agency visits and helping the students navigate the job search to sending emails of encouragement and support throughout the year.

“We would also like to thank Altria for their assistance this year and throughout the past decade; their significant financial support gives our students the data and technology resources they need to pursue their vision.”

All told, since 2013, the class has placed in the top three of the National Student Advertising Competition five times, taken the best research award three times, and now earned the Best Presenter Award as well.

All Fired Up
Adding fuel to the proverbial competitive fire this year was the competition’s surprising client, online dating and meeting app Tinder. While the choice may have raised some eyebrows, the UVA student team demonstrated it was more than capable of rebranding the famous swipe-based software for a college-age demographic.

Team member and May McIntire graduate Ben Gustafson said that the group endeavored to change people’s ideas about the brand, and he was well-prepared to convince others, having already been familiar with its positive aspects.

“Personally, I had actually met my girlfriend through Tinder, so I already had some sort of ‘brand love’ for the app,” Gustafson admitted. “But I know that some people don’t necessarily have the greatest impression of it.”

Teammate Susie Juarez Rodriguez, also a May McIntire graduate, said the challenge required a particularly critical and creative approach to get it right. “We needed to not only change perceptions for an app that has a reputation for ‘just hook-ups,’ but also change our own preconceived notions of what the brand could represent.”

In crafting their award-winning messaging, Juarez Rodriguez said she learned that the best kind of advertising is truthful and genuine. “Throughout the year, it became clear that we needed to create a campaign that was genuine to the brand and the consumer. We didn’t need the most expensive and flashy components; rather, a message that cuts through all the clutter and speaks directly to the consumer in ways that resonate with them.”

The team’s winning “Open to It” campaign focused on Tinder’s strengths by emphasizing the appeal of possibility. They played up the excitement of potential inherent in the app, advertising adventure, embracing the unknown, and accepting an invitation to explore in a pressure-free environment.

Ironically, winner of the Best Presenter Award, Stanisavljev, said that the most challenging aspect concerned calming her nerves before the Q&A session with the judges.

“Because our presentation had to be prerecorded, we had only 15 minutes to meet them and answer their questions. It was a short amount of time to make a considerable impression, and this worried me,” she said, explaining that the team members routinely practiced answering questions about their campaign.

Stanisavljev said she relied on her Commerce School Communication courses to succeed. “I used some of the public speaking exercises that I learned at McIntire to ease my nerves.”

Virtually Flawless
For Heilman’s Promotions group and the University, the National Student Advertising Competition victory is an unprecedented achievement that comes at what many hope to be the last remaining months of a most unusual time. Like 2020, this year’s competition was an entirely virtual event. But having to record their final presentations was the last of many hurdles the team had to jump; the pandemic required the class to endure many marathon sessions together online throughout the yearlong process.

Team member Logan Murtha knew that it would be difficult to bond virtually. “Though the hours upon hours we spent on Zoom were sometimes grueling, we never lost sight of our common goals and our commitment to the class and to one another,” she said, noting that the team’s sense of community helped them forge ahead, creating a campaign they were proud of.

Heilman, who has led the course to its three most recent National Student Advertising Competition titles, saw last year’s winning students overcome the complications of maintaining a digitally connected group, and said the 2021 team was equally up to the task.

“Winning the NSAC is an incredible undertaking and achievement in a typical year, but this year proved extra challenging,” Heilman said. “The students had to figure out how to collaborate, conduct market research, run brain-storming sessions, and build a class culture, all in a mostly virtual environment. Businesses worldwide struggled with these same issues, but the Promotions students quickly figured out how to do these things, and they executed their plan with determination, grit, and compassion.”

United
One of the points that team members reiterated is the ability of Promotions to unite students from across Grounds in the effort to draw upon a diverse set of strengths and experiences.

Murtha noted that the team members’ cross-curricular backgrounds strengthened their approach. “From media studies to psychology and from statistics to gender studies, each student’s perspective enhanced our campaign,” she said, explaining that the hands-on qualities of the class and the competition offer a memorable learning experience.

Juarez Rodriguez agreed, saying that the Promotions course closely mimics working on a real-world project like no other she’s taken. “‘Promotions’ is special because everyone who comes to the class is incredibly passionate, talented, and creative; the most rewarding part was having worked with such a diverse group of students who not only cared so much about this project, but also each other.”

“Of course, the competition is important,” Murtha conceded, “but at the end of the day, we were always trying to make one another–and Carrie–proud. I have never learned so much from a class–if you can really call it that! Promo is so much more than a class. You end up learning a lot about yourself, and we all learned the dynamics of working in teams, balancing strategic and creative thinking, and how to give your all to a project you really believe in.”

For Stanisavljev, the course and competition encapsulated what made the Commerce School special. “I am continuously amazed at McIntire’s ability to produce such meaningful academic experiences for its students. It has been eye-opening to work directly with a major client, and has made me want to pursue a career in marketing,” she said, crediting Heilman with her ability to drive student success and provide invaluable guidance.

“This unparalleled win by the ‘Promotions’ team epitomizes the ingenuity and fortitude that define McIntire and the University,” Commerce School Dean Nicole Thorne Jenkins said. “Though they fought through many issues that have made this past academic year demanding, their dedication and creativity have made all the difference. I congratulate the entire ‘Promotions’ team for their extraordinary effort and Professor Heilman for her leadership, accomplishing back-to-back competition victories and serving as a unifying, inspirational force to those she teaches.”

For her part, Heilman said she is extremely satisfied with the results of the class’s efforts. “I couldn’t be happier for these students to see their hard work pay off,” Heilman said. “They were winners for simply taking on the challenge, but the external recognition is validating and extremely gratifying.”