Rose Huang (McIntire '22) became the first-ever UVA student to achieve a podium finish at the event, taking second. The fourth-year McIntire student was part of a UVA Barbell Club contingent that sent a record eight lifters to the meet, three of whom placed among the top 10 finishers in their weight classes.

UVA McIntire student Rose Huang’s parents were skeptical when she first told them that she planned to enter a powerlifting competition.

“I grew up in a traditional Chinese household, where it was like, ‘Women shouldn’t have muscles and be doing these non-feminine sports,’” Huang said.

Fast-forward about six months, and Huang’s parents are her biggest fans.

At the USA Powerlifting Collegiate Nationals in Illinois in March, the 121-pound Huang set the collegiate and Junior American record for her weight class by squatting 318 pounds.

Huang became the first-ever UVA student to achieve a podium finish at the event, taking second. The fourth-year McIntire School of Commerce student from Oswego, NY, was part of a UVA Barbell Club contingent that sent a record eight lifters to the meet, three of whom placed among the top 10 finishers in their weight classes.

Nobody was more excited than Huang’s parents.

“Now they’re posting my videos and bragging to family back home about what their daughter is doing and how strong she is,” said Huang, with a laugh. “I think it’s just been really great to see that change.

“At nationals, the top three women on my podium were all women of color, which I thought was pretty cool. I just love how inclusive the sport is. Anyone can do it. It doesn’t matter how old you are. It doesn’t matter where you’re from or what equipment you have available to you because you can really train with almost anything. I just really love that aspect of it.”

The sport of powerlifting requires competitors to complete a squat, bench, and deadlift, the scores for which are summed to form a total. Lifters are ranked in their respective weight classes, and there is an algorithm that ranks competitors from all weight classes and genders together.

The performance was extra special for Ellison, who had come up short in qualifying for last year’s event.

“It was a really awesome turnaround for me,” Ellison said. “It was definitely a huge self-growth thing. And it just made it even more special to have the other UVA lifters and that team atmosphere witnessing it all happen.”

The other members of the UVA squad who qualified and competed at nationals were Jon Graf, Hunter Flora, Marvin Lee, Logan Montgomery, and Sandy Tiv.

As a result of their performances, Huang and Ellison became the first-ever UVA students to qualify for next month’s USA Powerlifting Mega Nationals in Las Vegas.

“It felt great to be out on the platform lifting, but what was even better when, after my session, I walked out into the lobby and got hugs from everyone else,” Ellison said. “That was by far the highlight, even more than the part where I actually got to lift.”

Huang agreed: “Even though it’s an individual sport, there’s just so much camaraderie. You support everyone–even if they are your competitor.”

The Barbell Club was founded by Kai Rossbach and Conner Bowman in 2018, according to Ellison.

As a senior in high school, Ellison looked to see if UVA had such a club, and was delighted to learn, via Instagram, that it did. As soon as he arrived on Grounds, he joined. Now the second-year from Richmond is hoping to form a separate UVA powerlifting team that would be more dedicated to the competition aspect of lifting than the Barbell Club, which also caters to casual lifters and bodybuilders.

“I think it’s the perfect time for powerlifting to kick off as a more specific community here,” Ellison said.

What Ellison–who is double majoring in chemistry and kinesiology–said he loves most about the sport is its objectiveness.

“It’s not like basketball, where you could kind of argue how you performed on a given day,” Ellison said. “In powerlifting, you have a number at the end of the day–and that’s your score. It’s really cool to train with a group and try to improve that for yourself over time.”

He added, “Representing the school is amazing and being able to compete on the highest stage is an honor and privilege, but being able to compete against yourself, ultimately, and improve upon what you’ve done in the past is personally what I’ve found incredibly rewarding, and I think a lot of the club members would agree.”

Huang has always loved to exercise. As a kid, she played a lot of sports. She began focusing on track and field, and cross country when she got into middle and high school.

But when she arrived at UVA, she wanted to do something different. She wasn’t sure what until walking into the weight room at the Aquatic & Fitness Center one day. Soon after, she was introduced to the Barbell Club, though she didn’t begin focusing on powerlifting until last fall.

Huang said balancing powerlifting with her studies hasn’t been easy.

“A lot of people don’t realize that in powerlifting, your training is about two to four hours each day,” she said. “We have to rest for quite a bit of time, and between each set we’ll do our homework or something like that. It’s a very time-consuming sport.” 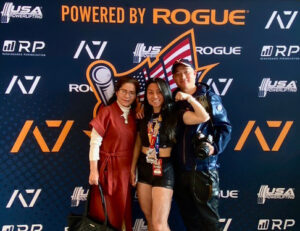 Huang’s success with the UVA Barbell Club has sparked an interest in competing professionally. (Contributed photo)

Yet, as Huang has learned, it’s also quite rewarding.

Now Huang, who is double majoring in Chinese and information technology and marketing–and who will be working for Ernst & Young in Richmond following graduation–hopes to continue competing on the professional level. She was recently selected as a sponsored athlete for Gameday Barbell, one of the top-ranked teams in the USA Powerlifting Pro Series Circuit.

Both Huang and Ellison have already qualified for next year’s Arnold Strongman Classic, an event created by Arnold Schwarzenegger that offers cash prizes.

Huang smiles when reflecting back to that first time she told her parents about her new hobby.

“When I did my first meet, they were like, ‘OK, we’ll let her have her fun.’” Huang said. “But I think after they saw me break the American record and be competitive on this level, they were like, ‘She may have something in her future with this.’ It’s been really nice to see them supporting me with this sport since it was something they were really foreign to.

“It’s just really cool seeing how much they’ve changed in their perspective of not only me doing it, but women in strength sports.”