The forum's panelists addressed the numerous and complex issues associated with private equity and its future. 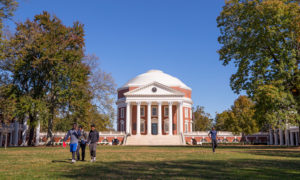 Is the party over? Are taxes really one of life’s certainties? Is bigger necessarily better?

These were a few of the questions pondered by eight alumni panelists at the McIntire School of Commerce’s 2007 Fall Forum, “Perspectives on Financial Innovation: Value Creation and the Private Equity Revolution.” The forum, held Oct. 12 in the Old Cabell Hall Auditorium, helped kick off a new private equity initiative led by McIntire Professors Bill Wilhelm and George Overstreet.

“We are extremely pleased to bring together such a distinguished group of McIntire alumni to discuss a market phenomenon of such timeliness and importance,” said McIntire Dean Carl Zeithaml. “Private equity is a major force in global finance, and the industry certainly merits precisely this sort of thoughtful discussion and consideration.”

Big Deals
“Private equity” refers simply to the ownership of any type of equity securities that are not listed on a public exchange. “Private equity firms” operate by obtaining controlling interests in companies (or business units) with the intention of delisting the target company from public exchanges and restructuring its capital, organizational, and managerial infrastructure. Once the restructuring is complete, companies are relisted through an initial public offering or sold to other investors.

Such activity has been highly profitable in recent years because, in part, of extremely low interest rates in the wake of the dot-com bust, which make it easier to borrow funds to purchase the controlling interests. Indeed, the success enjoyed by private equity firms during the past decade has far surpassed that of the storied Milken/Boesky era of leveraged buyouts. Firms’ returns have averaged some 16 percent over the last three years, and 2006 saw average firm returns of 24 percent. Not surprisingly, cash has poured into private equity firms by the billions.

But the $600 billion question is, is the private equity “revolution” sustainable? Is it really a better business model—one that yields enhanced returns for its investors and greater efficiencies for the economy at large?

Partying Like It’s 1999
Griffin kicked off the discussion by asking panelists for their responses to recent headlines heralding imminent doom for private equity as a result of recent turmoil in the world’s capital markets. “Is the party over?” Griffin asked.

Cohen, a Managing Director at private equity heavyweight Hellman & Friedman LLC, likened the private equity boom of the past few years to a very long keg party fueled by the “free alcohol” of extremely favorable interest rates. Although the current (apparent) slowdown might mean the end of the kegger, it doesn’t necessarily mean that the festivities are entirely over—they’ll just ratchet down to more reasonable, cocktail-party levels. Indeed, Cohen said, the end of the past few years’ big bash likely means the beginning of “a more stable, rational environment” for making deals. “We’ll take some aspirin, and we’ll show up at work again on Monday morning,” he said.

Adding Value—A Lot of It
Griffin also asked the panelists the secret of their firms’ success—that is, how their firms added value to the companies they’d purchased prior to the (often very profitable) resale of those companies. Tadler, a Managing Director at Advent International Corporation, responded by saying that the key lay in taking the “sometimes shocking” waste out of corporations—whether it lurked in layers of needless bureaucracy, supply chains, or simple managerial ineptitude.

After painstaking analysis, Tadler said, firms can “see where the opportunities are and bring the right people in to make the changes.” The critical difference between a privately owned and a publicly held firm, said Tadler and his co-panelists, is that “private firms think like owners, rather than agents.” An ownership mindset, the panelists concurred, makes the critical difference in firm performance.

The Bigger … the Better?
McIntire’s Wilhelm pointed out that along with private equity firms’ incredible success has come their significant expansion; many of the most successful firms, including The Carlyle Group, have ballooned from tiny partnerships into global operations with hundreds of employees. Is such growth, Wilhelm asked the panelists, for the best?

Cohen responded that private equity firms’ growth and corresponding institutionalization was indeed the biggest change in the industry. But the panelists were like-minded in their belief that growth was beneficial to their respective firms and to the industry generally. The scale that many private equity firms have achieved, they noted, has led to a number of benefits, including improved access to capital, the origination of fresh and profitable new ideas, and—crucially—a widening network of relationships.

“We have people scouring the world, looking for deals,” Cohen said. Ledford, a Managing Director at The Carlyle Group, opined that more and more private equity firms would likely begin to list themselves on the public markets. “Hypocritical?” Ledford said. “Yeah, but it brings liquidity.”

Shulman, a Managing Director at Allied Capital Corporation, pointed to growing opportunities in India, China, and Brazil. Not surprisingly, he cited Asia as being increasingly attractive, saying that operations there could serve as “beachheads for supply chains and sourcing.”

Paulson, a Partner at P2 Capital Partners, said that his company likewise outsourced labor and supplies from overseas as part of its drive to generate efficiencies. Carver said that Harren Equity Partners, where he serves as a Managing Partner, sources from China as a means to improve margins in the companies in which it’s invested.

More Questions
Once the panel formally ended, the panelists took questions from their extremely curious audience on topics ranging from issues of gender representation to tension between lenders and private equity investors to whether or not private equity firms and managers should pay more taxes. Many private equity groups were established as limited partnerships and therefore are not required to pay entity-level taxes. Moreover, because most of firms’ earnings come as long-term capital gains, they are taxed as such, at a rate of 15 percent. The federal corporate tax rate is 35 percent.

Said Cohen, “I think we’re an easy target. If you want to change the tax rules, change them for other limited partnerships, too—for hedge funds, and in oil and gas and real estate.”