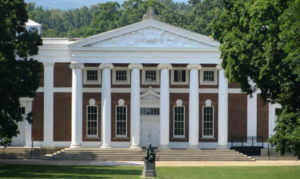 The McIntire School held its annual Fall Forum Friday, Sept. 29, 2006, in Old Cabell Hall. The forum, organized by the School’s Center for Growth Enterprises, each year, along with the School’s annual spring symposium, examines the complex nature and origins of organizational success. “With every symposium and forum, we work to facilitate compelling, multidimensional discussions of timely and important issues,” says McIntire Dean Carl Zeithaml. “We were honored to have Professor Gardner, one of the world’s leading experts on the workings of the mind, speak to us about leadership.”

Gardner, the author of more than 20 books on the development and education of the mind, is perhaps best known for his theory of multiple intelligences, a critique of the notion that there exists but a single human intelligence that can be assessed by standard psychometric instruments.

Gardner, who has studied myriad aspects of education, including the nature of interdisciplinary efforts in education, spoke on “Leadership and the Mind.” In 2004, Gardner published Changing Minds: The Art and Science of Changing our Own and Other People’s Minds, which formed the basis for the forum’s address.

In the address, Gardner discussed the mechanisms by which large-scale shifts in mindset occur around society’s biggest issues—for instance, how Americans, in large numbers, might shift from being Democrats to Republicans (or vice versa) or how Britons came to accept Margaret Thatcher’s market-based reforms after decades of state involvement in industry. Other examples of such sweeping social change include major shifts in people’s conceptions of art, or their acceptance of new scientific findings.

Effecting such change, Gardner said, requires the deft employment of seven “levers”: resources and rewards; reason; research; resonance; representational redescription; real world events; and resistances. Notably, Gardner pointed out that his system for effecting change is “amoral”—that is, it can be used effectively by people working to persuade others to change for good or ill. Of course, Gardner said, the best form of mind change is toward “good work”—the sorts of changes sought by such figures as Martin Luther King, Gandhi, and Nelson Mandela.

Gardner defined “fundamentalism” not in religious terms, but as “the commitment not to change your mind.” “It’s a waste of time to try to change the mind of a fundamentalist,” Gardner said.

After his keynote presentation, Gardner was joined in a panel discussion by U.Va.’s Bargmann and Scheld, both of whom are currently involved in projects to effect the sorts of change about which Gardner spoke. Bargmann, who teaches in the School of Architecture, has been recognized by numerous national and international design publications—as well as by Time magazine and CNN—as leading the next generation in making a difference for design and the environment. Through her interdisciplinary Project D.I.R.T. (Dump It Right There), Bargmann challenges conventional policy and works with architects, artists, engineers, historians, and scientists to revitalize blighted ecosystems and communities. Dr. Scheld is the Bayer-Gerald L. Mandell Professor of Internal Medicine and newly appointed director of the Pfizer International Health Initiative. He was formerly the president of the Infectious Diseases Society of America and now chairs the organization’s International AIDS Committee. Scheld has been a leader in bringing HIV/AIDS care, prevention, research and training programs to Africa.

Both Bargmann and Scheld addressed the difficulty of what Bargmann referred to as “getting people past the head-nodding stage.”