New Commerce School graduate Kate McGinn (McIntire ’19) is one of 21 UVA alumni and graduate students who have received Fulbright Scholarships offering research, study, and teaching opportunities in more than 140 countries. This represents the largest cohort of Fulbright recipients from the University in one year. 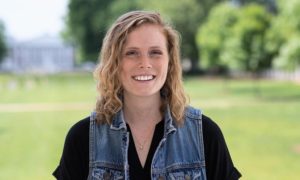 New Commerce School graduate Kate McGinn (McIntire ’19) is one of 21 UVA alumni and graduate students who have received Fulbright Scholarships offering research, study, and teaching opportunities in more than 140 countries. This represents the largest cohort of Fulbright recipients from the University in one year.

During their time with the Fulbright U.S. Student Program, these scholars will meet, work, live with, and learn from the people of their host countries, sharing daily experiences in the classroom, in the field, in the home, and in routine tasks. Grantees gain an appreciation of others’ viewpoints and beliefs, modes of being, and ways they think. Through engagement in the community, grantees will interact with their hosts on a one-on-one basis in an atmosphere of openness, academic integrity, and intellectual freedom, promoting mutual understanding.

McGinn, a Finance concentrator from McLean, VA, will be producing a documentary about the impact Hungarian right-wing populism has had on the country’s minority Roma group. She will be pursuing this in conjunction with the University of Theatre and Film Arts and the Central European University in Budapest.

“I hope to study the marginalized Romani community in Hungary and understand the effects that the recent uptick in nationalism has had on their acceptance within the larger Hungarian community,” she says. “The Romani population is Hungary’s largest minority group, and current living conditions for these communities are significantly worse than for the general population. I aim to understand these century-old trends in the larger context of modern political sentiments.”

“I am half-Hungarian,” she notes, “and while I have visited family in the country many times, I have never had the opportunity to spend more than a few weeks at a time there…The Fulbright is giving me the chance to better get to know where I come from and to uncover some of the challenges that countries like Hungary, which has been rightfully criticized for its nationalist ideals, face.”

A recipient of the 2019 Sky Alland Scholarship and a Royster Lawton Fellowship, McGinn adds that her research in Hungary will allow her to expand her academic pursuits and learn new skills applicable to her future impact-oriented ambitions. She will pursue an offer at Silicon Valley-based investment management firm Makena Capital Management and plans to eventually start her own company or join a social enterprise’s founding team within the education realm.