McIntire alum Cassandra Enyan has sought to ensure that the impact she makes professionally aligns with her personal goals to do meaningful work. And as Head of Android Platform Partnerships in Ghana and Tanzania for Google, she maintains that learning from her wide range of experiences while helping enact positive change is what keeps her going. 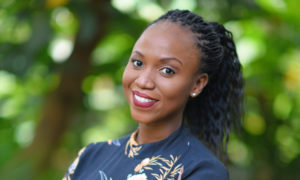 McIntire alum Cassandra Enyan has sought to ensure that the impact she makes professionally aligns with her personal goals to do meaningful work. And as Head of Android Platform Partnerships in Ghana and Tanzania for Google, she maintains that learning from her wide range of experiences while helping enact positive change is what keeps her going.

Enyan has spent years engaging in strategy and cultivating relationships. The Finance and International Business concentrator began her career as a Finance Associate with Rolls-Royce, where over the course of five years, she tackled business development, finance strategy, and business assurance projects. After a graduate school summer consultancy working with startup and mentoring incubators with the Tanzania-based Mara Foundation while pursuing her Master of International Affairs degree from Columbia, she assumed a critical consulting role in the establishment of socioeconomic advisory firm Kina Advisory Limited.

When she first joined Google, Enyan served as Commercial Operations Program Manager for Project Link, an internet access initiative in markets across Africa. The position allowed her to see the direct results of her efforts in furthering economic development.

In her current role, she finds herself collaborating with mobile operators, device manufacturers, and other important figures in the ecosystem to enable more Africans to get online and use their devices for value-adding activities.

“Africa is a continent where the majority of people’s first and only connectivity to the internet is through their mobile devices. Android is the world’s most popular mobile platform, with more than 2 billion monthly active devices worldwide. In Africa, over 90-95% of mobile devices are on the Android platform. We’re focused on creating consistent, reliable, and secure experiences within a strong ecosystem, making them available to as many people as possible. For me, in the markets and with the partners I cover, it is about consistently working on getting as many people as possible and in ways that add value to their lives,” she explains.

We recently spoke to Enyan about doing business in Africa, her McIntire experience, and the connection between her identity and her continued success.

What business challenges do you find unique to Africa and/or specific to the countries where you focus most of your efforts at Google?
To some degree, business challenges in Africa are similar to challenges faced in other regions, but I will flag one that I feel is more pronounced in Africa. The costs of doing business in most markets in Africa tend to be higher, primarily because operational costs are higher. These can be attributed to inadequate channels of financing, high costs of borrowing, inadequate or poor infrastructure, red tape, and lack of inter- and intraregional connectedness sometimes making it difficult to capitalize on economies of scale.

It is important to point out that some of these are more pronounced in some places than others. These are by no means death sentences. In as much as they are challenges, they also present themselves as opportunities to those who are persistent in figuring them out and capitalizing on them. At a macro level, various governments, private sector agents, and other players in the markets are working on minimizing these challenges through a variety of initiatives.

What were the biggest differences in your work life that you noticed when you started working in Ghana?
When I made the decision to pivot my career to have a geographic focus on Africa, I had no prior experience working in the region. I was born and raised in Ghana but had spent my formative years, including my undergrad and first few years of work, in the United States and the UK. I was able to garner a summer consultancy in Tanzania during my graduate studies, which helped in getting on-the-ground experience. Nonetheless, it was a big jolt to my system to move back to Ghana. The jolt was not necessarily from a workplace perspective, as I was lucky to have a great team and manager, which helped to ease my transition. It was everything else that had to do with living and working in the country.

For example, I moved back to Ghana at the peak of a power crisis, which meant that sometimes I’d leave work and go home to no power (thankfully, I discovered inverters). Also, living close to the office was too expensive, so I opted to live further out of town. But living further away came with its own opportunity costs. I lived about 20 kilometers from the office, but on a typical day, I’d commute 1.5-2 hours each way driving because of inadequate public transport systems or carpooling options. I struggled with the thought that I was essentially losing 15-20 hours a week just sitting in traffic. I learned how to navigate and manage it over time.

The other big challenge was salary. I took a pay cut to move to Ghana, but at the time, I was motivated by other factors that superseded salary. With that being said, there were a lot of positives. Because the team and work were in their formative phases, my breadth and depth of work expanded. My work scope expanded to cover strategic, operational, financial, and technical topics I wouldn’t have been able to cover with a more defined team and geography. The salary aspect has also rectified itself with time.

What stays with you from the Comm School in your current position?
The ICE experience, in which we were randomly assigned into teams to work on very important projects for our corporate sponsors, stands out to me. You have a team of very different people who may not ordinarily hang out together, coming from very different backgrounds and interests, grouped together to deliver very high-quality outputs spanning marketing, financial modeling, business strategy, quantitative analysis, and so forth. Then they have to turn around in a relatively short period of time and present their recommendations to executives who are tasked with executing these ideas.

The fact that we had to stand there and answer all these questions, have holes poked into our models—and to do so in a unified manner irrespective of how our personal differences affected the final deliverable—is something that built confidence in my own voice as well as any contributions I make in team settings.

All of those skills—that is, countless presentations, executive communications, negotiations, strategic thinking, managing relationships, data analyses, to name a few—I very much use today on a daily basis.

How did your years at Rolls-Royce impact your career?
As previously mentioned, I joined Rolls-Royce right after McIntire as part of a graduate finance leadership development program (FLDP) and within my first two years with the company had rotated through different geographic locations and spheres of finance, including strategy, business assurance, and business development, reporting to various VPs and directors.

I learned very early on through these rotations to be open-minded about situations and people, quickly familiarizing myself with the locale, carving out projects, and building rapport and confidence in my skill set. I gained confidence in public speaking through presentations to execs. I became Lean Six Sigma certified, which means I look at any given problem from multiple angles to solve it in a holistic manner.

Obviously, there were times when I felt like I failed in some initiatives. The most pivotal point in my career came from an experience in which I was able to fail and learn and iterate on a project, and eventually, successfully deliver on it. It proved to me (because I had initially been petrified of the project) that there was absolutely nothing I couldn’t do if I set my mind to it. It is what pushed me to ask myself the big questions and take the leap of faith to pivot my career. My time at Rolls-Royce prepared me to embrace curiosity and ambiguity in my career. I may have started off in finance, but I soon began to describe myself as a generalist with specialized skill sets.

As we are attempting to highlight successful McIntire alumna in finance, can you speak to how being a woman has played a role in your education or your career?
I am a woman, a black woman, an African woman. Gender, race, and nationality have played a role in my education and career, but to the extent that I can control my narrative, I try to focus on what I can do and what I can control. In my opinion, these parts of my identity have only served me well. Whether it is contributing to product discussions, designing processes, or building teams, I am able to have a multifaceted viewpoint on any given situation. My identity allows me to look at soft angles and hard angles, and I am better for it.

I recently became a mum for the first time, and I found out I was pregnant just as I was about to start a new role in South Africa. I could have rescinded the job or asked for some exceptions on travel. I was moving to a new country, where I had no family, and taking on a job in a completely different function, which also entailed a lot of traveling. My husband and I hadn’t exactly figured out the logistics of our move, since he was working in another country (and we still haven’t). Imagine if I had decided to wait till everything was aligned? I was exhausted at times and rested when the doctors said I needed to, but other than that, I continued as normal. I didn’t let those unknowns decide for me.

I am currently juggling living in two countries and working out of at least three countries (Kenya, Tanzania, and Ghana), and it is a balancing act. I am not Superwoman. I am blessed to have a supportive spouse and family who know to push me when I need pushing and to let me take a breather when I need to.

I have had great male and female mentors, and I generally operate assuming good intent and things working out in my favor. That has pushed me to take on projects and go places where others might have said, “I’m female, I’m black, I’m a woman.” Yes, I am all of those things, but I am first and foremost human, just like the next person. Obviously, there are always exceptions to these opportunities, but I would urge women to stay in the race for as long as possible. We belong everywhere.