We recently connected with Hall to discuss her McIntire experiences as a pioneer student at the School, her two decades as a federal executive with the U.S. Department of Education, and her second career as a mediator and mentor. 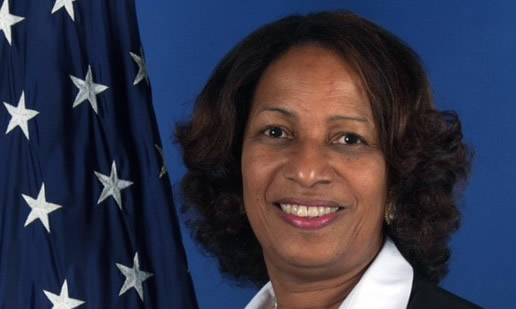 “Before I can talk about applying to McIntire, I must go back to my decision to attend the University of Virginia,” Linda White Hall says.

One of the first Black women to graduate from the Commerce School, Hall explains that four years earlier, in 1974, when she received her diploma from West Point High School in Virginia, she found that many post-secondary schools were actively recruiting African American students, “particularly females.” As she was judging schools’ academics, reputation, and several other factors, including what she considered a reasonable 2.5-hour bus ride back home, the University of Virginia emerged at the top of her list.

“But whenever I mentioned my plan to apply to UVA, almost everyone, including my guidance counselor and several of my teachers, told me, ‘You’ll never get into that school.’”

Undeterred, and encouraged by her parents, Hall persisted in following her plan, though no UVA recruiter ever reached out to her. Sidestepping an offer to join the first class of women in the U.S. Naval Academy after being put off by the idea of dedicating “four regimented years in school and four more years after graduation” in military service, she decided to continue to pursue her quest to get to Grounds.

Though she succeeded in getting accepted, the news arrived without fanfare. “When I received my acceptance letter from UVA, I do not recall sharing the news with anyone but my parents. There was no congratulatory outreach from the school. No massive financial aid package,” she says.

Upon moving into the suite of the since demolished, all-female Webb dorm, where her father insisted she stay, Hall recalls being overwhelmed by her fellow first-years’ diversity of experiences.

Even the fact that one of her suitemates was a diver in high school proved mind blowing.

“My tiny high school did not have a diving team, or even a pool. The only pool in West Point was at the segregated country club.”

The intolerant views responsible for segregation followed her from her hometown to Grounds, casting a gloom over her initial experiences, as Hall recalls being subjected to hearing thinly veiled racist comments from classmates. But she would not be dissuaded from reaching her objectives and realized that she was more than capable of keeping up with both the workload and her peers despite the foreboding speeches hurled at first-years from some professors (“Look to your left, look to your right. One of you will not be here.”).

After attending her first large lecture class, Hall quickly decided that Sociology was not for her. Shortly thereafter, the Commerce School came on her radar as a potential target for her ambition.

We recently connected with Hall to discuss her McIntire experiences as a pioneer student at the School, her two decades as a federal executive with the U.S. Department of Education, and her second career as a mediator and mentor. What we were fortunate enough to receive from her constitutes the sharing of a true education by someone astute enough to have captured the distant details in mind and to relay them from her heart today.

After realizing that Sociology wasn’t a fit, what made you decide on the Comm School? What goals did you hope it would help you achieve?
I started looking for a major that I could use to find a job after four years. When I started talking about applying to McIntire, I was again told, from faculty and from some of my classmates, “You’ll never get into that school.” I knew that I had to get accepted because I did not have a plan B.

I struggled through Basic Accounting, but everything started to make sense in Managerial Accounting.

I was accepted at McIntire, graduated in 1978, and the rest, as they say, is history. I completed my degree in four years, as my father insisted. Landed my first job at (then) Westinghouse Electric Corporation and later went on to graduate from Wharton in 1981. I have been a White House Fellow and a Senior Executive in the federal government. I do not recall all of the goals set by my 17-year-old self, but McIntire taught me that I could achieve any goal and compete with anyone.

Lesson learned: Don’t listen to the naysayers. Follow your own heart.

How would you describe your time at McIntire as it related to your overall University experience? How did the Commerce School contribute to or shape your education and extracurricular pursuits on Grounds?
I do not know when McIntire began admitting women, but I do recall that the University began fully admitting women in 1970. That means that my admission in 1974 was probably the fifth class of women. There were many students, and faculty, who still thought that women did not belong. And that feeling was truly amplified as an African American woman.

McIntire, for me, was a lonely experience. No one wanted, voluntarily, to be a study partner or invite me to a study group. There was still the less-than-subtle feeling from my classmates that I did not belong in the still male-dominated world of business and the Comm School.

There was little support from the University for African American students. There was no Office of African American Affairs. The UVA President, Frank Hereford Jr., was still a member of Farmington Country Club. There were no professors of color at McIntire. I do not even remember if any of the administrative staff was African American.

I joined the Theta Kappa Chapter of Alpha Kappa Alpha Sorority Inc. during my second year, before I entered McIntire. “Greek life,” as we called it, was a major social outlet at the time. There were four African American students in my McIntire graduating class in 1978, two males and two females. All of us were in Black Greek letter organizations: The males were in Alpha Phi Alpha; the females were in Alpha Kappa Alpha. The four of us talked of starting some type of Black Commerce student group at the time—but there were not enough of us to be officers.

I was pleased to be asked to join the McIntire Board of Advisors in 1985 and served on the Board for several years. Dr. Bonnie Guiton Hill was Dean during my tenure on the McIntire Board. I am delighted at the recent appointment of Dr. Nicole Thorne Jenkins.

Lesson learned: Be confident, even when those around you are watching and criticizing your every move.

How did attending McIntire ultimately impact the start of your professional life?
When I finished McIntire, I was anxious to get out and start a career. After all, I still remembered my father’s edict to finish with a degree in “four years, no summers.” Commerce Career Services at McIntire was excellent. There were many, many companies that came to recruit at McIntire every year. I had to find my own way in researching companies, signing up for interview slots and the like. I would pick companies from all spectrums and hope that I would get an interview slot. Accounting majors were in demand from the then Big Eight accounting firms.

My first job, as I mentioned earlier, was with Westinghouse Electric Corporation in Maryland. It was certainly not a company that would have been my first choice. Since they were a huge defense contractor, I learned about a lot about finance in a corporate setting. It was a typical entry-level job. I think there may have been 50 or more of us who started at the same time. The job was pretty boring, so I only stayed there for one year. I left Westinghouse to pursue my MBA at Wharton. My McIntire education meant that I placed out of many of the entry-level business classes at Wharton, which was a huge help.

Lesson learned: Cast a wide net in your job search. Your first job may not be the one that you expect.

In what ways did your McIntire education prepare you for your former career of more than 20 years as a federal executive with the U.S. Department of Education? What experiences from McIntire stayed with you during that part of your life?
When I left McIntire, I had no idea that I would become a career federal employee. After receiving my MBA at Wharton, I worked in the private sector for a few years. I was then selected as a White House Fellow. I returned to the private sector for a few years and later chose a federal career to balance my work life and family life.

At McIntire I learned confidence. I learned public speaking skills, and I learned to think strategically. It was expected that we would succeed.

When I entered the federal government, my goal was to be selected for the Senior Executive Service, the highest career achievement. I achieved that goal. All of the fundamental skills and values that I learned at McIntire have served me well. They never go out of style.

Lesson learned: The lessons and skills that were learned at McIntire become part of you. Trust your instincts.

You’ve transitioned into a second career as a certified mediator and mentor. What are the greatest challenges you face most often? How have any aspects of what you took from your McIntire experience remained with you in your current work?
I have always been aware of my responsibility to the larger community. I have chosen a second career as a mediator to support that responsibility. As a senior executive in the government, I served in many roles, but always had managerial responsibilities. In one of our required executive development courses, I learned about the mediation process. I decided then that this was something that I wanted to pursue after I retired from the federal government.

Mediation is a process where a neutral third person helps parties discuss and try to resolve a dispute. As a mediator, it is my job to help the parties use self-determination to resolve their disputes. Solving a workplace or other type of dispute between two parties may mean one less damaged relationship and perhaps one less lawsuit.

Lesson learned: The lessons and skills that were learned at McIntire become part of you. Trust your instincts.