Dannhauser’s successful completion of her Peace Corps assignment resulted in the McIntire alumna unexpectedly receiving the highest accolades possible from the Bamiléké people she served.

Imagine you’re far away from home—on the opposite side of the world—in a place completely different from your own in landscape, lifestyle, and language.

Now consider that the reason you’re in this unfamiliar land is that you’ve been asked to learn, and then teach the locals a practice you have no experience with yourself. No less challenging, you’re living among people with a unique dialect of a language you already don’t speak fluently, and from moment to moment, you’re forced to try to make sense of a whole set of customs you’ve only learned about preliminarily during your intensive but brief training. You’ll be there for a little more than two years.

For Leigh Dannhauser, this was the very situation she faced when she accepted a Peace Corps assignment in the West Region of Cameroon as an agriculture volunteer.

The Highest Tributes to Service
So how did she do? 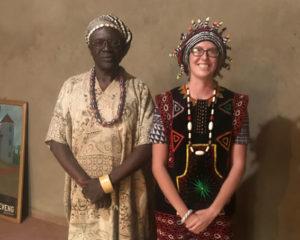 The King of Baleveng and Leigh Dannhauser at the Princess Ceremony

Long story short: Dannhauser’s successful completion of her assignment resulted in the McIntire alumna unexpectedly receiving the highest accolades possible from the Bamiléké people she served. She was made a princess twice—by both the village Chief of Banza and the King of Baleveng (the “groupement,” the larger area where the village is located), and even had a baby named after her.

“These honors came to be after working side by side with those in the village to improve their farm production,” says Dannhauser. “They were a thank-you for becoming a part of the village and for working to improve food security and teaching farming enterprises like mushroom cultivation and avocado tree grafting.”

Special recognition of her time in the village was the impetus for a child being given her name. “A family wanted to thank me, but didn’t have the monetary means to buy me anything they deemed sufficient,” she says. “Instead, they gave their newborn grandson the middle name Leigh.”

It’s clear that Dannhauser more than made good on her initial goals when joining the Peace Corps. She launched herself into the U.S. government volunteer program as a way of following her mother’s example of generosity, caring for others, and giving back to the world. She was also driven by a desire to integrate herself into a culture unlike her own, learning about the most crucial needs of an unfamiliar society while helping them institute a more sustainable economic future.

A New Way of Life
Of course, these accomplishments didn’t come without some major personal challenges. Yet despite her complete lack of previous farming experience, Dannhauser says the most difficult aspects of her service, which were often physically taxing, had much less to do with the actual agricultural labor itself.

What proved most demanding involved living so far from her family and friends while simultaneously attempting to become part of an altogether different community. “I missed holidays, birthdays, the engagement party for my brother, and the wedding of one of my closest friends from college. It wasn’t easy to know that all of this was going on while I was living in the mountains over 5,000 miles away from home,” she recalls.

When Dannhauser arrived in Cameroon in September 2017, she didn’t speak French, and had never heard the patois of Baleveng called Yemba. “Even with the intense 10-week training program that the Peace Corps provides to volunteers once they arrive in Cameroon, it was challenging to learn it all,” she says, happily noting that the communication and cultural difficulties quickly became part of the past, thanks to the supportive, hands-on approach of the village residents—and her Comm School education.

Interested working or volunteering with businesses or organizations focused on creating positive social impact? Here, Dannhauser offers her tips to McIntire students considering their options for using commerce as a catalyst for change:

1. Leverage your McIntire experience. When I initially interviewed with the Peace Corps, I was accepted to serve as a business advising volunteer in Peru, and that was entirely because of my time at McIntire.

2. Be flexible. If your goal is to truly create positive social impact, understand that those who have a firm grasp on the needs of their organization will have a better understanding of where to place you than you will. You may not see how you can make a difference when you think you’ve been wrongly assigned, but you will surprise yourself if you are flexible and persistent towards your end goal.

When I was reassigned to Cameroon to be an agriculture volunteer, I wasn’t sure it was going to work out because I had zero agriculture experience. But I gave it a chance, and came away from it all with an unforgettable experience. I would like to think my village gained as much as I did.

3. Know your limits. Know what you are—and are not—willing to do. For me, the Peace Corps was not intended to be a step in my career, so I was okay with being transferred to be an agriculture volunteer. But something similar might not be the case for you, and you need to think about that in advance.

4. Do your research. I chose to go into the Peace Corps after spending months researching and thinking over every detail I could find. Make sure that the initiative or business does what you want to be doing. There are so many different ways to create positive social impact, and it is important to know in advance if you have a preference so that you can better target your search.

Cultural Connections and Commerce
“I think one of the greatest strengths of my Comm School experience was working with people from other cultures,” Dannhauser says. “The McIntire staff works hard to ensure that student groups incorporate people from different backgrounds. This impacted me a lot. Working with people with different perspectives and values wasn’t always smooth, but that was when the lessons were learned.”

Having internalized the McIntire graduate program’s trademark development of crucial soft skills—like the ability to collaborate with diverse groups—she quickly came to rely upon this capacity in Africa.

“It was part of the reason why I waited to start doing actual work until I got a better feel for how the people in my village lived,” she says. “I needed to learn the values of my new community before starting any projects, because it was their values that would determine a project’s success.”

Dannhauser notes that she also had the opportunity to draw from the nuts and bolts of her Comm School education when it came to project management: “I was able to complete two grants during my time in Cameroon. I was taught to anticipate delays and extra expenses, and we stayed under budget for both grants.”

Lasting Impressions
With all of her accomplishments helping to establish sustainable farming practices in the village—practices that she believes will long outlast her time there—Dannhauser says that what stays with her goes far beyond the gains she made for the village residents; the ultimate profit was becoming an integral member of their community.

“It was the small moments that I enjoyed the most, from the shock on people’s faces when they saw me carrying a giant bag of beans on my way home from the farm, to the joyous laughter of the women when I greeted them in Yemba on my walks around village,” she says. “It was being invited to ceremonies, like funerals and twin ceremonies. It was the easy conversations I could have with friends and neighbors. I gained a new family and became a part of a new community. To be welcomed like that is something I will always remember.”

She has also endeavored to add an authorship credit to her growing list of achievements. Her memoir about her years in Baleveng, Nothing Works But Everything Works Out, is scheduled to be released in December 2019. Dannhauser hopes that her readers understand the overarching lesson of determination and “the importance of being patient, flexible, and persistent in their endeavors,” insisting that they apply to any goals. She also believes that her book may help to open eyes and spark curiosity about how other cultures live.

Continued Impact
Dannhauser’s plans for the immediate future include law school, where she intends to focus on studies in human rights. In the long term, she’s hoping to become an international human rights attorney, potentially working for an international NGO, the UN, or a private firm that strives to make progress in related areas. She’s not sure where her next academic pursuit will lead, but she maintains a courageous positivity as she prepares for the next step in her journey.

“What I do know is that I hope to continue to make a difference in the world—and I am confident that I will find my best path to do so.”