Teaching abroad presents different learning opportunities than students will find on Grounds, but for Carfagno and Harris, the benefits extend a great deal further than simply being outside of Virginia.

Cautiously, life seems as if it’s slowly returning to normal. As the pandemic has morphed into a more manageable threat, its most recent ebb has allowed for some normalcy for some of McIntire’s most innovative programs.

For one such program, the Commerce School’s M.S. in Commerce, that change means returning to travel for its requisite Global Immersion Experience (GIE), McIntire faculty-led courses that bring students in the program to learn in locales across the world late in the spring semester. Facing travel shutdowns in 2020 and 2021, the School quickly pivoted to provide a different version of the GIE, one defined by regional and topical seminars on crucial global business topics, highlighted by guest speakers who brought real-world expertise from their experiences working in a multitude of critical areas.

And though the coronavirus and its associated problems are hardly part of our past, greater manageability has afforded the necessary space for new experiences to emerge in the place of the most recent virtual GIE editions, such as the Copenhagen-based Sustainability and the Broader European Union Context course, jointly created by Professors Kerrie Carfagno and Ira Harris.

Students spent three weeks in Copenhagen, divided by a few days learning in a second location: Carfagno brought one section to renewable energy exemplar, the Danish island of Samsø, while Harris, the M.S. in Commerce Program Director, led students to Stockholm, Sweden.

Students visit a farm on the Danish island of Samsø.

The results of this approach to GIE were a combination of its traditional travel and immersion aspects, but distilled and refocused in a novel way. The still unsettled nature of the pandemic directed the course to stay fixed within two locations (as opposed to the pre-pandemic GIE trips that visited five different countries), but the extended time in Copenhagen, made possible through longtime McIntire partner school DIS, led to a new focus and a sustained level of engagement not usually possible on a traditional GIE trip.

Before their arrival, DIS, the Danish Institute for Study Abroad, took the necessary steps to make the institution safe, as Carfagno reports that 1,400 students were tested for the coronavirus across the school’s various programs, with only one infected student reported. As much as restrictions were being lifted stateside, many coronavirus controls had similarly been removed in Copenhagen by the time the McIntire graduate students landed in Denmark.

“We entered a country without masks and without much risk of COVID,” says Carfagno.

“I saw very little mask wearing throughout Copenhagen,” Harris says, explaining that when making timely travel planning decisions months earlier, the picture for how conditions would be in May was still particularly opaque. “We were really trying to manage our risk back then.”

For that reason, the idea of working with an academic partner was of great value and enabled the Commerce School professors to organize the nearly three-week learning trip with fewer reservations about how the pandemic might influence their schedule. That kind of study-abroad collaboration wasn’t new for the School, as Harris says the GIE relied on academic partners in Denmark, China, and Singapore during his first three years teaching in the M.S. in Commerce Program, and that those early experiences provided the confidence that the partnership would be successful.

Yet despite the lengthy span of time since those first few years, Harris insists that most of the changes that took place since then were to be found in McIntire’s overall approach when abroad, rather than any fundamental differences to be noted in Copenhagen. 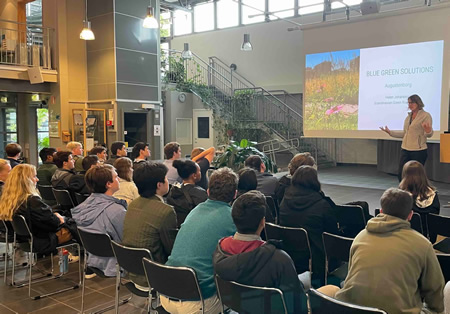 Helen Johansson, Director at the Scandinavian Green Roof Institute AB, discusses the benefits of the sustainable building practice during a company visit.

“At the start, we thought it was a good idea to be in our academic partners’ classrooms to help students get acclimated and understand what was happening on the ground in the respective locations. But we eventually moved away from it, because what we found was that the students were spending a lot of time in the classroom talking about what was on the other side of the wall,” Harris recalls, explaining the transition in McIntire’s adjusted approach. “We shifted to get them out into the streets and experiencing the local culture, with company and cultural visits.”

Being out and about gave students firsthand interactions with Danish methods dedicated to help the city meet its most pressing environmental, economic, and social concerns.

“Copenhagen is superbly situated to be a living lab for sustainability,” says Carfagno. “We did a biking tour while wearing headsets with an urban planner who walked us through how Copenhagen is dealing with climate change. We toured a park where walls are raised by water level to collect and hold water during flooding. And Copenhagen’s creation of safe biking allowed the students to realize how flexible it can be to get around a city without cars.”

Harris says that biking serves as an important part of Danish culture and that all M.S. in Commerce students were issued a vehicle when they arrived. “Many of the company visits—and even when they went from their housing to class about 20 minutes away—were by bicycle. It immersed them in the idea of biking as a primary means of transportation culture, as it was part of their daily routine.”

Carfagno points out that they all biked to the wharf, where they then took a boat to visit an offshore wind turbine. They even climbed to the top of one.

“The grandfather of the wind turbine industry, Hans Sørensen, talked to us about renewable energy in Copenhagen and throughout Denmark and then showed us the turbine so students could understand the business case and benefits of renewable energy,” she says. “We also enjoyed Nordic cuisine, and many of our meals focused on locally sourced and in-season foods.” 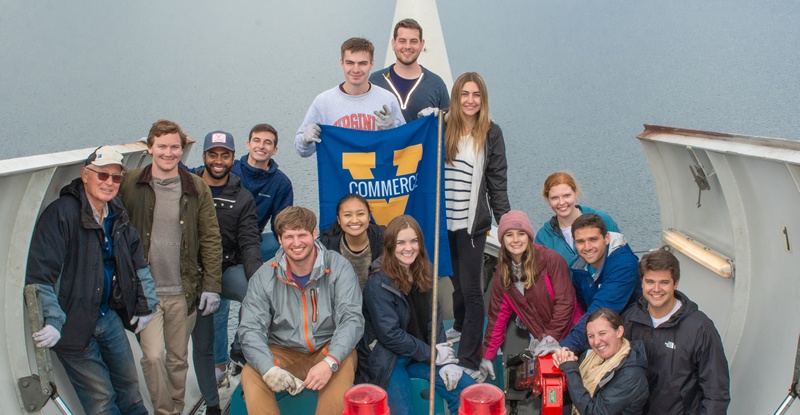 Hans Sørensen (left) with students at the top of an offshore wind turbine. Before leading students to the stunning vantage point, Sørensen shared his insights about renewable energy efforts in Copenhagen and throughout Denmark.

“Sustainability is baked into the local culture of what we call farm-to-table establishments in the U.S.,” says Harris. “It was really instructive to get the students into these settings where we had a lot of group dinners, helping them to understand that it’s a demonstration of what we talked about in class. And even though dinner wasn’t an official company visit, it did demonstrate what some of those companies talked about earlier in the day.”

Though this year brought fewer company tours overall, Carfagno says the trip was no less exciting or unique. “This year, we had something amazing: Danish Minister of Parliament Marcus Knuth (A&S ’02) gave us a tour of the Danish Parliament’s last day in session while they discussed the June 1 vote for joining EU defense. On a busy day, when he was speaking at 4 p.m., Marcus met with two groups of 30 students. He gave us a tour of Parliament and some history and discussed the current vote and what renewable energy and oil dependency mean for Ukraine’s war as well as for Denmark and the EU.”

During the Danish Parliament’s last day in session, Danish Minister of Parliament Marcus Knuth (A&S ’02) met with the two groups of 30 M.S. in Commerce students and provided a tour.

A World of Difference

Obviously, teaching abroad presents different learning opportunities than students will find on Grounds, but for Carfagno and Harris, the benefits extend a great deal further than simply being outside of Virginia.

“Teaching abroad well means making the culture and the environment part of the classroom,” Carfagno says. “In our case, the war in Ukraine and the current events of the time added even more to the impact of sustainability on both the world around us and the industries our students are entering upon graduation.”

Harris believes that despite the challenges inherent in navigating a pandemic-affected world in 2022, “every year our definition of ‘classroom’ shifts a bit. When we’re abroad, we’re with the students all day. While we may spend time in a conventional classroom, company visits really complement the lectures in an important way, and the entire experience is different. It is a very analytical approach to traveling.”

He explains that the group tapped into culture and contrasted North American business practices and cultural norms with those found in Denmark. “We had periodic debrief sessions where students learned from each other and made sense of our daily activities. It’s really an important part of the educational process, and we’re very intentional, putting students in situations to recognize those differences.”

Those distinctions have yielded epiphanies and personal growth from the graduate participants.

“What is most encouraging for me is watching the student realize that other cultures can look at the same issue with the same constraints and come up with a different solution that is equally valuable or sometimes more so than how we do it in the U.S.,” Carfagno says. “Denmark calculates health into their building plans. If you look at the return on investment in building a biking bridge, the externalities of improved health—from more biking—are calculated into the return, along with the real estate value in the area, among other factors. We don’t add our externalities into the equation. For example, if we build a coal plant, the ROI is just the value of the energy generated. While Denmark could recognize that value, it would also calculate estimated health consequences of those living near a plant and the costs associated with illnesses tied to coal, an example of why they don’t build coal plants anymore,” she explains.

“With this component being positioned at the end of the program—we normally think of GIE as a capstone experience—we bring together many strands of their education that they’ve had in the previous nine and a half months or so. The way that the students responded during our debriefs, the way that they asked excellent questions of the presenters in our company visits, and the way that they’re able to make really nice connections across concepts and earlier courses are terrific demonstrations of how their thinking has improved,” he says. “They were not positioned to be able to make many of these observations back in August. It’s terrific evidence of the progress that they’ve made, and that’s what this program is all about.” 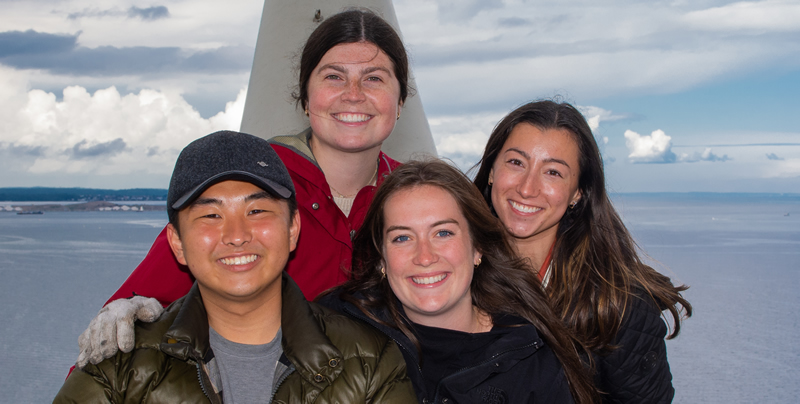