The McIntire School of Commerce at the University of Virginia today announced a $1 million gift from John F. Kirtley (McIntire ’85) and Kim Kirtley to establish the Carl P. Zeithaml Bicentennial Professorship Fund. 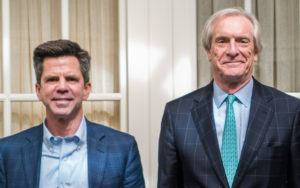 The McIntire School of Commerce at the University of Virginia today announced a $1 million gift from John F. Kirtley (McIntire ’85) and Kim Kirtley to establish the Carl P. Zeithaml Bicentennial Professorship Fund.

The Kirtleys’ donation to the School qualifies for an additional $500,000 from the Bicentennial Professors Fund, a University initiative to increase funding for faculty support across the institution, bringing the total impact of the gift to $1.5 million. Named in honor of the Commerce School’s longstanding Dean Carl Zeithaml, the new fund will be used to create a professorship supporting the McIntire Alternative Investing Initiative (MAII) and its related coursework and programming within the Finance area. The Kirtleys’ gift is the latest contribution to the MAII initiative, a rigorous new experiential and academic endeavor designed to explore business through the lens of alternative investments.
The Kirtleys expect their donation to help to grow the number of skilled graduates entering the private equity market.

“There is a real need for highly trained undergraduates who can hit the ground running in private equity firms,” says Kirtley. “This is particularly true in smaller firms, where the lines of responsibility are less defined. McIntire is producing these graduates—KLH Capital [co-founded by Kirtley and fellow McIntire alum Jeffrey Leck (McIntire ’85)] is now led by one of them—and it should produce even more.”

Kirtley notes that the School is uniquely qualified to fulfill this need, referencing his own positive experience as a student. “First, McIntire gave me a great grounding in accounting—the language of business. Then the coursework made us apply that knowledge to real-world cases in finance, starting with small companies,” he says. “That training was tremendously valuable my first day on the job after graduation at the venture capital division of a large bank.”

Further inspired by a shared wish to give back to the School that Kirtley credits with preparing him for his professional success, he says that he and his wife, Kim, were personally moved to honor Zeithaml with their gift. “I believe that Carl is the most effective dean in the country, and what he has done for McIntire is simply incredible. The School was great when I was there, and it is so much better today,” Kirtley says.

“McIntire is deeply grateful to John and Kim Kirtley for their generous contribution to the School and our ongoing efforts to expand innovative programs across highly relevant fields like alternative investing,” says Zeithaml. “I am also truly humbled by their naming decision. On behalf of the entire School community, I sincerely thank them for their support as we endeavor to meet the goals of our Inspire the Next Century Campaign.”

John Kirtley co-founded two private equity firms with fellow McIntire alum Jeffrey Leck. He is also the Founder of Step Up For Students, a nonprofit that administers five scholarship programs serving 150,000 low-income and special needs students throughout Florida. Kim Kirtley is the former Communications Director for the Florida House of Representatives and an adviser to Florida Attorney General Pam Bondi.

About the McIntire School of Commerce
The McIntire School of Commerce at the University of Virginia proudly celebrates a nearly 100-year commitment to preparing its students to become thoughtful, innovative leaders in global business and society. McIntire’s unique integrated educational experience leverages technology, welcomes corporations into the classroom, and offers unparalleled, immersive global learning opportunities. The School is home to six research centers and many highly regarded undergraduate, graduate, and certificate programs. Learn more at commerce.virginia.edu.