The mentor-mentee event offered attendees a chance to connect and reflect on the power of relationships.

For 100 years, the McIntire School has been made stronger by the people who are committed to our ever-growing community of business learners and visionaries. Driven by a desire to use the power of commerce to effect positive change across the world, our alumni help to enact that transformation on Grounds and beyond by investing their time and care in current Commerce School students. In celebration of our Centennial, we recognize the work of our many dedicated mentors, who, year after year, share their knowledge and guidance with the passionate third-years, fourth-years, and graduate students who represent McIntire’s future success. 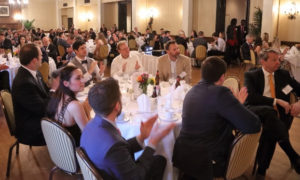 Students in Boichuk’s “Creating Value in B2B Markets” course had a chance not only to enjoy an elegant dinner with an outstanding group of McIntire alumni and friends, but also to hear the remarkable story of the event’s keynote speaker, Emmanuel Jal.

In a one-of-a-kind capstone event, the 48 students taking McIntire Marketing Professor Jeff Boichuk’s “Creating Value in B2B Markets” course had a chance not only to enjoy an elegant dinner with an outstanding group of McIntire alumni and friends, but also to hear the remarkable story of the event’s keynote speaker, Sudanese former-child-soldier-turned-peace-advocate Emmanuel Jal.

The event, titled the “Impact Gala,” was held April 12, 2016, from 6 p.m. to 9 p.m. at Charlottesville’s Boar’s Head Inn, and served as the culmination of a semesterlong project in working with mentors to develop the skills required to build and sustain meaningful relationships, which Boichuk considers critical to the creation of collective value within and for businesses and other organizations.

“The Impact Gala was designed to honor the tremendous and enduring power of individual relationships, as well as to help students strengthen the bonds they developed with their mentors over the course of the semester,” Boichuk explains. “My aim, in inviting Emmanuel Jal to share with gala attendees the moving story of his rescue by British aid worker Emma McCune, was to offer the mentor-mentee pairs an unforgettable shared experience—as well as an unforgettable reminder of the tremendous potential of human connections.” 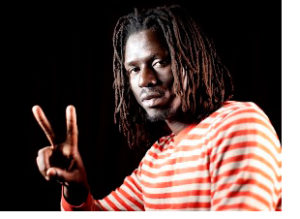 Jal’s story could hardly have served as a starker example of the enormously positive possibilities of such connections. Orphaned as a result of the atrocities that wracked South Sudan in the late 1980s, Jal endured an extended period of horrific hardships as he was forced, at the age of 7, to become a child soldier. Rescued at the age of 11, Jal was given the opportunity to go to school, where he not only learned to read and write, but also, he told the audience, to let go of his anger and hatred. “I learned that many people have suffered,” Jal explained to listeners. “I learned that all human beings are the same, and the understanding of that truth was the greatest gift I could have received—because it allowed me to forgive, and that forgiveness truly liberated me.”

Jal has dedicated his life to living out the values that McCune embodied, advocating—through music and public appearances—for peace, education, and a variety of children’s causes.

“Emmanuel Jal’s presence offered an amazing conclusion to a course that asked students to immerse themselves in the process of establishing a sustainable, fulfilling, and mutually beneficial relationship,” says Boichuk, noting that the class also required students to work on a wide range of more tangible skills, including learning how to use customer relationship management (CRM) software, engaging in effective storytelling, practicing influence and persuasion tactics, and understanding organizational growth and retention goals.

The evening also served as an opportunity to honor the course’s outstanding undergraduate and graduate students, Daniel Krimowski (McIntire ’16) and Emmanuel Abebrese (M.S. in Commerce ’16), respectively, both of whom Boichuk lauded for their potential not only to succeed in business, but to do good in the world.

Jal, who referred to himself as an “accidental entrepreneur,” commended the mentors for their generosity in working with the students.

“You can quantify the value of diamonds and gold,” he told listeners, “but investing in a human being is priceless, because the potential is unlimited.”

McIntire Professor Jeff Boichuk and the students and mentors engaged in “Creating Value in B2B Markets” offer their enormous thanks for the generosity of event sponsors First Colony Winery, Livestream, Boar’s Head, and The Sales Management Association.

By Mary Summers Whittle. This story was originally published April 15, 2016.