The tech startup founder hopes his app will become a hub for data-driven action to fight climate change. 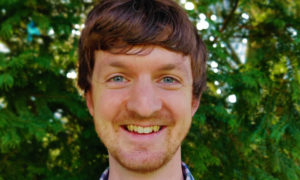 It wasn’t until fairly recently that Patrick Keating made any effort to reduce his carbon footprint.

He confesses that he couldn’t figure out how to start doing anything about it, and felt paralyzed by the overwhelming amount of measures to take. Confronted by a slew of information about how to best go about it, with conflicting data to suggest the most effective actions to take, he did nothing.

When he went in search of a tool to help him gradually improve his consumption and behavior, Keating came up empty. An inability to get proper guidance for his earnest desire to live an ecofriendly life left him feeling as if the only options available to him were making huge, and therefore much more difficult choices, such as switching to an electric car, or forcing him to cut things out completely, like taking international flights.

But as many of us know, those kind of monumental life changes can not only be difficult to initiate, they can be nearly impossible to sustain.

After graduating from the Comm School in 2012, Keating left Grounds to work in microfinance for three years in Bangalore, India, where he helped apply technology to expand financial services to those without access. After that, he relocated about 600 miles north to Mumbai to take a position with Vera Solutions, building data and technology solutions for a variety of social impact organizations.

Realizing that he had no measurable way of knowing if his actions were indeed moving him closer to carbon neutrality, Keating set out on his own, following the old adage that necessity is the mother of invention.

“With the gravity of the climate crisis becoming increasingly evident,” he says, “I knew many other people were looking for ways they could act.”

The result is Globo, Keating’s company that’s flagship product is an easy-to-use app that helps people go carbon neutral and channel their desire to mitigate climate change in the most effective ways possible.

Now located in Oxford, United Kingdom, Keating spoke with us about Globo’s continued evolution, the longlasting influence of his McIntire education, and his hopes for a more sustainable economy—and planet.

What helped prepare you for Globo’s creation and launch, and what made it more difficult or easier than you imagined when you were in the earliest stages?
A couple of things that made creation and launching easier were my previous experience doing technology implementations and the plethora of high-quality online resources available for cheap or free. After doing technology implementations for other organizations for a few years, I knew how to plan a successful launch and avoid common pitfalls. There are also so many online courses and forums, especially in the tech world, that it’s easy to skill up quickly if you’re resourceful and a problem solver.

Mental health proved to be a significant challenge to launching. I’d heard, of course, that founders’ mental health often takes a hit, but didn’t realize how that would impact my effectiveness. I’d dealt with stress and long hours before, so I didn’t think it’d be a big deal, but didn’t account for how vulnerable you have to make yourself as a founder, especially at the beginning, when you don’t know if your work matters or if anyone will care. I’ve lost several days taking care of my mental health, needing to crawl into a hole for a bit before I’m ready to get out and face the world again.

Can you give an overview of the kind of work you do on a day-in, day-out basis?
As sole founder of a tech startup, most of my time goes to writing code and talking to users. I spend most of the day building out new features and improvements to Globo and try to talk to a few users every week to hear what’s working for them and what challenges they’d like Globo to help solve. I also talk to current and potential partners running carbon offset programs to get more information about their projects. Finally, I deal with the unglamorous admin side of the business: legal, accounting, etc.

What has changed most about your efforts at Globo in the time since you started it?
There are a million things I’d like Globo to do and be, but I’ve realized it’s important to concentrate on solving one problem first and communicate that clearly. It can be hard enough to solve one problem, so focusing on too many problems at once can lead to diluted impact and messaging. Once you’ve isolated that one problem, it’s important to clearly communicate your value proposition. It doesn’t matter what your product can do: If you can’t concisely explain what benefit someone will get from using it, they won’t use it.

What are your plans (short-term and long-term) for the company? How do you define success for it?
Globo’s MVP has just launched, so in the short term, my plans are to make more people aware of its existence and ensure it is helping people reduce their carbon footprint.

Longer term, I hope that Globo becomes a hub for data-driven action to fight climate change. I’d like it to become a marketplace for low-carbon products and a center for rallying people to political causes that matter most.

Globo’s success is defined by its contribution to mitigating climate change. The key metric for measuring success is the amount of emissions reduced; I’m targeting 1 million tons of CO2e by 2023.

How has your Commerce School education informed the work you have been doing? What from your McIntire experience stays with you?
The ICE project from third year is pretty relevant to projects in the real world. You’re presented with an issue you know very little about, paired with people who work differently than you, and have to do your best to convince experts the answer you arrive at is correct. If you’re being ambitious, you’ll always be punching above your weight, and that final presentation to the corporate sponsors is a good simulation of how the most pivotal moments of your early career will feel. Work hard, work smart, and work together, and you can produce meaningful work, whatever the field.

What do you see as the greatest upcoming opportunities in the sustainable energy and environmental fields that people aren’t—but should be—talking about?
As many a climate activist has said before, the solutions to mitigating climate change are already abundantly clear and well-discussed. I don’t think it’s the opportunities that need more focus, but rather, the impediments. Despite widespread support for a swifter transition to renewable energy, the fossil fuel industry continues to use their considerable wealth to slow and undermine this transition. As the Sunrise Movement explains, “intensity and money can beat passive majority support for an issue.” Movements succeed if they have an active base of 3.5% of the population, so get active! Follow the Sunrise Movement, 350.org, Friends of the Earth, or another reputable organization to get involved in local and/or global movements.

Anything to add?
We need more bright minds working to bring about a sustainable economy. There are organizations approaching the issue from all directions, so find one you like and join it. If you don’t find one doing what you want to do, start one. Don’t leave it until later when you’re richer or more experienced: You can develop all the skills you need on the job, and money follows passion.