From the Centennial Archives: Grads and Dads Talk “Promotions” as Class Gears up to Compete in AAF National Competition Finals

We spoke with the teammates and their dads about “Promotions” in the past, Heilman’s leadership, and what the current group has learned from this uniquely McIntire experience.

This Centennial Year, we honor our past, present, and future. This article was originally published May 31, 2018. 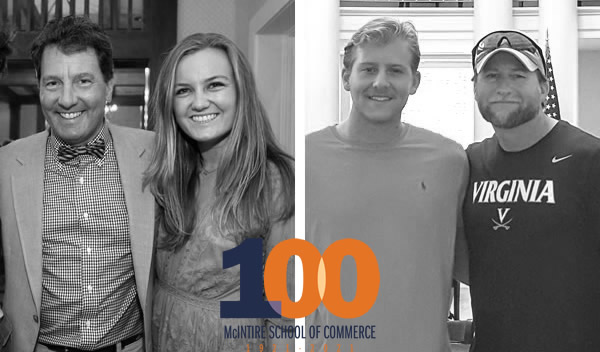 McIntire’s “Promotions” class is having a phenomenal year. After successful showings at both the district and semifinal levels, the class’s presenting team is headed to Chicago for the American Advertising Federation’s National Student Advertising Competition (NSAC) Finals, June 7-9. Led by Marketing Professor Carrie Heilman, they’re hoping for a repeat of their strong 2016 showing, when they took the first-place spot at nationals.

Co-chair of the class’s Research Committee Ben Weinberg (Engineering ’18) and Creative and Video Committees member and presenter Juliana McCormick (Batten ’18) share more than just an unflappable work ethic and hope for a well-received finish to their Ocean Spray campaign: They both have alumni parents who are former members of McIntire teams that competed in NSAC in years past.

Despite the current “Promotions” members’ familial connections, the fathers in question had two very different experiences. Joe Weinberg (McIntire ’83) was part of the team that won it all in 1982; Kelly McCormick (McIntire ’86) got on board with the 1983 team, one that, according to Mr. McCormick, failed to make any traction.

After nationals, Ben will train with Venture for America in advance of a two-year commitment at fleet management software startup Fleetio in Birmingham, Ala.; Juliana will train with Teach For America in Philadelphia before taking on a position as a secondary English teacher in Washington, D.C. As they prepare for their ultimate UVA-related challenge—pitching their campaign to the NSAC client judges—we spoke with the teammates and their dads about “Promotions” in the past, Heilman’s leadership, and what the current group has learned from this uniquely McIntire experience.

On making the connection to past “Promotions” campaigns
Ben Weinberg: “At one point last semester, my dad was visiting Charlottesville, and I decided to give him a tour of the ‘Promotions’ lab. As I was showing him the class’s past campaigns, which are commemorated on the walls of the lab, he nonchalantly mentioned that he had worked on the Corning Glass Works campaign in ’82. Before that, I had no clue he had participated in the competition.”

Joe Weinberg: “Our campaign theme was both simple and powerful: ‘Corning Glass Works…’ We developed a marketing campaign targeting chief technology officers and executives at major Fortune 500+ companies to both generate awareness and facilitate direct sales efforts of Corning’s technology solutions for industry. Creatively, we highlighted how Corning Glass technology worked for major individual industries and companies and why Corning should be their technology partner.”

Juliana McCormick: “Throughout the year, I spoke regularly with my dad about my experience in ‘Promotions,’ connecting it to him on the level that he concentrated in Marketing within McIntire. I was excited to share some aspect of my UVA education with him, without even knowing that he too participated in the 1983 ‘Promotions’ equivalent. It wasn’t until our victory in Raleigh that my Dad realized he had also competed in NSAC. This disconnect is likely a product of Virginia Advertising’s later shift from extracurricular club to academic course—a change that dramatically grew the program.”

Kelly McCormick: “It’s funny. I was involved in ‘Promotions’ before I was in the Comm School. I just felt like I needed to get something going that interested me at McIntire, because I thought that was where I was headed.

“We were brainstorming [for the Maxwell House Coffee campaign], and I was part of the problem because I’m not a coffee drinker. We just didn’t have a great way to sell coffee to young people. Everything we were trying to figure out got figured out for us later, because the coffee wave was coming! And on top of it, we were feeling a heavy weight from the previous year’s success, kind of the usual feeling the year after a championship.”

Juliana McCormick: “I’m sure the resources afforded to my dad’s 1983 team did not equal those we enjoy now. The collective support of McIntire, our corporate sponsor, and Carrie all but demand we succeed—defined at minimum by a research story and campaign that we’re proud to pitch.

“I recall learning that Ben’s dad had participated on the 1982 team and thinking it special—even auspicious—that we had that legacy of success. Unbeknownst to me, we also wielded my dad’s ‘legacy of defeat’ (in his words). Nevertheless, Chicago here we come!”

On Heilman’s guidance
Juliana McCormick: “Carrie charged us to ‘never settle.’ For the Creative Committee, this meant long nights in the lab envisioning creative directions that would never see daylight. But these hours of ideation were never painful, because beyond encouraging commitment, Carrie encouraged friendship.”

Ben Weinberg: “Carrie has done an incredible job of teaching us the hard and soft skills necessary to create a successful campaign. First and foremost, I’ve learned a lot about teamwork and staying present from our beloved coach. She really fosters a culture in which the students are supportive of one another and ask how they can help when not working on tasks of their own. I’ve also learned to be a student of advertising, dissecting marketing of all forms and thinking about how it would apply to Ocean Spray, even after we submitted our final deliverables.”

Juliana McCormick: “Carrie cares for her students so intensely that she slept in her McIntire office the night before our book was due, recognizing that the looming snow day would prohibit her from returning to oversee the book’s submission should she leave. I hazard most professors would’ve opted for the comfort of their home. But not Carrie.”

Joe Weinberg: “Quite frankly, when I saw the sophistication of the process and work product being produced by the group on the Ocean Spray campaign, I wasn’t surprised, but was still blown away.  Carrie has taken the group to a new level, and I know Ben and the rest of the team are gaining an incredibly valuable experience that will follow them the rest of their lives.”

On the lessons of the “Promotions” experience
Ben Weinberg: “As for hard skills, I’ve learned how to quickly gain a holistic understanding of consumers and competitors through market research; created, iterated, and analyzed multiple large surveys; planned and executed focus groups; and gained a basic understanding of the Adobe suite, to name a few. Honestly, the list goes on and on. I even once made a virtual reality cranberry bog.”

Juliana McCormick: “I was drawn to advertising because of its roots in storytelling. As such, I took an early interest in our team’s writing efforts, helping with both video and presentation scripts, as well as producing and editing copy for creative executions throughout our book. Ultimately, ‘Promotions’ taught me the importance of grounding a story in strategy; I’ve learned that in advertising, copy is only as powerful as the research from which it comes.”

Joe Weinberg: “The ‘Promotions’ competition was a tremendous experience on many levels and a great training ground for the business world. We learned how bringing skilled people together—spending intense periods of time on a common objective, researching, listening, contributing, making decisions, closing, and doing it all with passion and a sense of humor—leads to extraordinary results.”

Kelly McCormick: “It was a great experience for me, since I was headed toward marketing, and still work in a marketing capacity in real estate. But I’m so excited to go to Chicago and see Juliana; my daughter is fun to watch.”