Arin Mitchell is what you would call a true team player. Driven by an enthusiasm for creating communities, her desire to bring people together led Mitchell to her current role as Brand & Social Impact Communications Manager for LinkedIn. 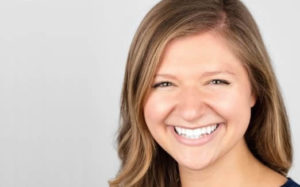 Arin Mitchell is what you would call a true team player. Driven by an enthusiasm for creating communities, her desire to bring people together led Mitchell to her current role as Brand & Social Impact Communications Manager for LinkedIn.

Despite what seems like a natural fit, it took some time for her to discover exactly how her motivating interest would manifest itself as a guiding principle in her professional life.

After graduating from McIntire with concentrations in Marketing and Accounting—along with a double major in Psychology—Mitchell took a position with Deloitte as a Business Analyst for Human Capital. After two years with the Big Four firm, she decided to try her hand at something different.

Speaking to us during a UVA student visit to LinkedIn, she reflected on her career path, drawing a direct connection between her current job and her time on Grounds. During her time as a Comm School student, she gave tours at McIntire, an extracurricular responsibility to be sure, but one that would have a profound effect on her future nonetheless.

So how did a McIntire student tour guide find her way from Rouss & Robertson Halls to writing her own job description at LinkedIn’s San Francisco office?

Mitchell would be the first to admit that her journey hasn’t been a straight shot.

When weighing her career options, she often reflected on her time at McIntire. “I knew that I loved giving tours. And that sounded silly, but what that meant was that I loved creating a sense of community,” Mitchell says. “That was important to me, and that’s the bigger insight. If I love creating a sense of community, how can I do that every day?”

Finding a way to apply that skill into a paid position took some time. Joining LinkedIn in summer 2015 as a Program Manager in the company’s Global Sales Business Leadership Program, Mitchell stayed in that role for two years, before engaging in a half-year stint as an Associate Employee Communications Manager.

Mitchell’s now LinkedIn’s first internal communications manager focused on empowering its own employees as brand ambassadors and social impact advocates, which, she says, “basically means helping all of our employees and members understand what the LinkedIn brand is, and feeling like social impact and giving back are part of our day jobs.”

The end result is that Mitchell’s passion supports her company’s vision to create “economic opportunity for every member of the workforce,” an objective she admits is monumental—but one that connects her personal drive to the company’s overarching vision.

Her own major career goal is no less ambitious. She sees community building as her way of genuinely valuing the importance of relationships, and using that as a catalyst “to win the hearts and minds of employees.” Mitchell aims to fully convince her LinkedIn colleagues that they are working for “the best brand and what it represents: this idea of really creating opportunity for people who may not have it today.”

“There’s a community thread that gets to be not only my day job, but the company I work for, and that’s pretty awesome,” she says. “I found that out at McIntire. And I was very tactical in giving tours, but the bigger thread was about building community.”

Mitchell believes that in order for companies like hers to maintain and develop communities, they must hold themselves accountable and act with integrity to “be the best version of themselves.” For individuals, that translates to being active participants in a mutual cycle of care. “We need to help one another. No one does anything in isolation,” she says. “And so the fact that I get to be on the forefront of creating that culture, sharing that culture, and building out programs that focus on that culture is just the coolest thing.”

Beyond the relationships she has helped fostered in her career, Mitchell recognizes the impact of those connections she has made through the McIntire community and its role in her success. Because of what the School did in providing her with an unmatched learning experience and access to alumni willing to offer guidance, she does her part to continue that cycle of giving. As a member of the McIntire Young Alumni Council, Mitchell remains dedicated to helping with the type of ongoing event organizing and fundraising involvement that is as crucial to supporting the health of the School community today as it was for her as a student.

Mitchell acknowledges that, as an undergrad in Charlottesville, she hadn’t ever seriously considered the idea of relocating to San Francisco for a career. As such, she feels that the UVA students she meets touring LinkedIn are already in an enviable position, simply by virtue of having direct exposure to the multitude of options available to them. In embracing the many possibilities that come with making big life decisions, she reassures visiting undergrads that “no career path is linear. There’s not one right way to do things. That’s probably really refreshing for UVA students to hear—especially McIntire students.”

She passes along this additional advice: “You don’t have to have it all figured out right after graduation. You’ve got time. You’ve got a multi-decade-long career, so it’s okay to do things at your own pace and on your own path.”

It’s an assessment as forgiving as it is fair—and Mitchell is living proof.