“By running, jogging, and walking through predominantly Black neighborhoods, the group not only shows its members areas of Charlottesville that they otherwise might not see, but also—and more importantly—shows people living in these neighborhoods that Charlottesville has a growing community of people who are focused on achieving social justice,” says Professor Jeff Boichuk, who runs with the group.

Three times each week, members of the Prolyfyck (pronounced “prolific”) Run Crew get out of bed early to lace up their running shoes and jog through a few of Charlottesville’s predominantly Black neighborhoods. Group founder William Jones III was originally motivated to first plot a route for his own runs some 15 years ago in the interest of promoting a positive image among the area’s Black residents. In 2018, a few young Black men joined him, and together they ran through the city under the name of Run These Streets, which they then changed to Prolyfyck a year later. Their goal was as straightforward as the act of running itself: to create a closer community and foster the greater good by undertaking a regularly occurring, shared athletic effort.

But in 2020, with the increased attention to pressing social justice issues, their runs attracted more participants, quickly growing from what was often less than a dozen people to a diverse team of runners and walkers that of late routinely amounts to more than 50 members.

A few of those who now join Prolyfyck for the 6 a.m. start time include McIntire Professor Jeff Boichuk, as well as Comm School students Kenan Besen (McIntire ’21) and Alex Pradhan (M.S. in Commerce ’21). 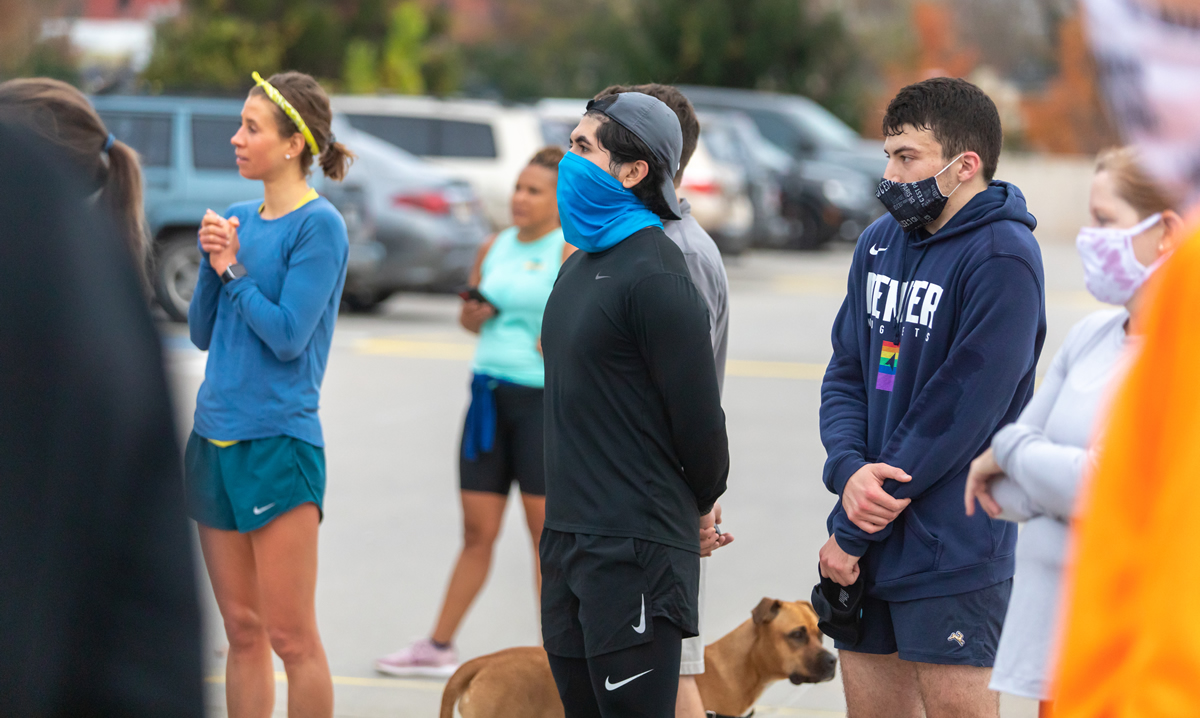 Making a Run for It
Boichuk, a runner since he was an undergrad, says the group came to his attention when he spotted them in action. After seeing some friends posting about Prolyfyck on social media, he was excited to discover that all were welcome to take part.

“My first run with the group was June 17, 2020, five days after Rayshard Brooks was shot and killed by a police officer in Atlanta, GA,” says the McIntire faculty member selected to participate in the 2019 Teaching Race at UVA Faculty Development Seminar. That experience was seminal for him, as he learned a great deal about local Black history, especially in the context of Black people’s relationships with the University and the city. He sees the morning exercise as a two-way approach to awareness by increasing visibility for these areas and its residents, while showing those who live there that there is an increasing number of those who care about them and their place in the city.

Last August, Boichuk invited Besen, whom he taught in the Integrated Core Experience, to come on the run. Besen joined, as he was interested in taking part in more off-Grounds experiences like those he experienced through gender-inclusive service fraternity Alpha Phi Omega.

Despite the difficulties inherent in waking before sunrise, Besen also found that the group run offered a communal energy that provided a welcome change to his solo runs during quarantine.

He then invited his friend Pradhan to come along for a Friday run last semester. A former soccer player who more or less considered himself a beginner, Pradhan was similarly interested in connecting with Charlottesville community members and improving his running performance. As opposed to Besen, Pradhan says the pre-crack-of-dawn start time has assured him that he is, as it turns out, a morning person.

“I am still tired when I first wake up, but that quickly turns into excitement and sharpness, as I can’t wait to get in some morning miles while I watch the sunrise,” he says, noting that while runs dictate that he can’t stay up late with his coursework, the runs have been “a positive stimulus for my workflow and schedule.”

“Compared to Alex and Professor Boichuk, I am definitely the late riser in the trio,” Besen admits, saying that though he started running regularly in March of 2020, he wasn’t quite as motivated to do it upon waking. “I was certainly never the type to willingly get up at 5:45 in the morning to get my run in!” 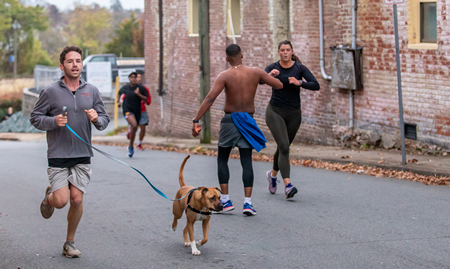 Boichuk says that runs allow for regular interactions with many supportive community members, including a woman who offers words of encouragement and high fives while she waits for the bus. Another woman peps up runners from her second-floor apartment, calling to them to have a blessed day or a good weekend, to which the passersby respond in kind. Other one-off examples strike Boichuk as memorable for embodying the true spirit of the mornings.

“One day, a Black man with a cane was walking up 8th Street NW as we were running up it, and the whole group waited for him and cheered until he reached the top. Once he got there, he said, ‘If you don’t stand for something, you’ll die for nothing.’ It was such a powerful moment and a great realization of the group’s mantra to leave no one behind.”

Besen finds that the greatest benefit of the runs is engaging with Charlottesville leaders such as Dr. Wes Bellamy. He’s also glad that he has been able to continue developing relationships with local business owners such as Sarah Messer, Co-Owner of juice and smoothie bar The Juice Laundry, and Ann Dunn, Co-Founder of Formula Fitness, both of whom he knew from completing projects focused on their respective ventures while he was in Boichuk’s Marketing class.

What stands out to Pradhan is the exchange of ideas with other Prolyfyck members.

“Sometimes, that looks like listening to someone speak to the entire group post-run on a topic close to their heart or poke fun at their friend’s running outfit. On other occasions, I may chat with someone about how we like our morning coffee or what I’m thinking about career-wise,” he says. “In short, it is really a lot of the stationary moments when I have the most appreciation for this group and this space.”

On Grounds to Off Grounds
The inclusive nature of the group means that it carries on its mission with people of all ability levels who move forward at different paces. As such, many UVA figures have become involved.

A group leader, Katherine Lawrence, an Assistant Director for Academic Services in Athletics, is regularly joined by others from UVA Athletics, including players and coaches such as Wide Receivers Coach Marques Hagans, who brings his young son with him. Anna Katherine (Clemmons) Clay, an Assistant Media Studies Professor responsible for a December 2020 New York Times article, is a regular, as is Batten School Assistant Professor Sebastian Tello-Trillo.

While Boichuk says that UVA student and activist Zyahna Bryant (UVA ’23) has participated several times, as well as three of his own students who came for a run last fall, most undergraduates find the time to be too early. The assessment was echoed by Besen, who decried the fact that he’s had little luck in convincing his classmates to follow his lead.

Yet Boichuk is heartened by McIntire’s Dean Nicole Thorne Jenkins, who has expressed an interest in joining the walkers on the route.

A Community within a Community
The regular sight of the runners convening and passing by has forged connections that have helped form a tight-knit group among the runners and local businesses, with the aforementioned The Juice Laundry offering discounted smoothies, Good Phyte Foods distributing free energy bars, and Hot Yoga Charlottesville hosting post-run stretching sessions.

Social worker group members have also given several talks on mental health, which has been just one example of support the runners have provided for each other.

“Seeing the group come together for one another during hard times and when loved ones have passed has been the most meaningful experience for me,” Boichuk says. “Charlottesville lost Arthur William Walker (aka ‘Bun’) on Jan. 21, 2021. Bun worked at Mel’s Café and was well-known in the community. His wife is a regular member of the group, and a large contingent of their family, including many children and grandchildren, of which Zyahna Bryant is one, came out when the group dedicated a run to Bun to honor and celebrate his life. Being there for the family was very special.”

Forging deeper connections with the city’s community is something that he looks forward to, as he credits his involvement with opening his eyes to recent fatal acts of gun violence in the community, noting that he wouldn’t have known nearly as much about the lives that were lost and those who have been so adversely affected.

While Boichuk sees the group as an avenue for strengthening relationships through the shared routine, he also believes that the long-term effect of the runs has the potential to attract more diverse-minded faculty and academics to UVA and serve as another means of retaining them as they become more active in the local community.

“Going on the runs exposes you to so many different people’s experiences in Charlottesville,” he says, noting that those relationships have proved enlightening.

Pradhan finds yet another upside to being a part of the group: “I believe that one of the long-lasting impacts of Prolyfyck will be the simple message that anyone can be a runner if you’re willing to show up for yourself and for others.”

Ultimately, showing up is what it’s all about.

“One of the group’s most commonly repeated rallying cries is ‘We here!’” says Boichuk, explaining that the phrase signals that the runners are in the streets to build community and foster change. “I care deeply about the Charlottesville community, so I show up to do what I can to help the group succeed in its mission.”