Class of 2022: The Art of Communication with Sammy Wondwossen

One of the first Comm Cohort students to graduate from McIntire, Wondwossen says that the School reinforces the importance of communicating with others to build a strong community, as well as building a network to support a professional life. 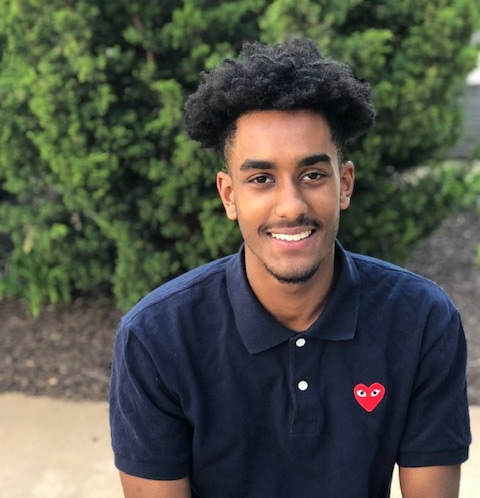 When Annandale, VA, native Sammy Wondwossen came to UVA, he was unsure if he wanted to pursue a major in Commerce. He recalls that when deciding what academic path he might follow, he was unaware of all the opportunities offered by McIntire. But joining the Commerce Cohort helped to change all that.

“The Comm Cohort played an important role in my general understanding of the Comm School as a first-year,” Wondwossen says, pointing out that the program allowed him to meet McIntire faculty and learn about the School’s concentrations and tracks, while engaging in activities with likeminded students who were discovering aspects of McIntire. The sessions also gave them time to determine whether or not what the School has to offer resonated with them as a potential course of study to pursue during the second half of their University careers.

Launched in September 2018, the Commerce Cohort was created to provide unprecedented learning opportunities for prospective McIntire students from traditionally underrepresented groups, and some participants, like Wondwossen, now represent the first such students from the program to graduate from McIntire.

As a result of the experiences he had engaging in group projects that were structured similarly to those found in Commerce courses, he says he was armed with the insight that led him to decide he was indeed drawn to the School, its curriculum, and its ability to prepare him for a future working in a related field. “I was always interested in business and the impact that companies have on the communities around them,” he says, referring to industry’s ability to impact the general populace.

He says he’s enjoyed learning with all of his Comm School professors, who he says taught him the skills he’s sure he’ll use for the rest of his life, particularly those he absorbed during the Integrated Core experience.

“Before ICE, I never really experienced so many group projects at one time that required research, presentations, and reports, but the experience helped me work on my communication and time management skills, which have helped me in so many ways.”

Wondwossen notes that McIntire reinforced the importance of communicating with others to build a strong community, as well as building a network to support a professional life during the accomplishments and pitfalls of a career.

“In our classes, faculty stressed the importance of in-class participation, reaching out to groupmates to work on projects, and creating presentations with a team. Being open and communicative with others is probably the most important thing I’ve learned from my courses and professors. I believe that my improved communication skills helped me land my job and will continue to be one of my strongest skills that I want to master going forward in my career,” he says.

And while he’s completed a track in Business Analytics, Wondwossen has also been balancing his Comm work with a minor in Art History, a choice based on a fairly nascent interest he has cultivated in the visual arts. In fact, he says that one of his favorite moments has come from visiting the Connaughton Art Gallery on McIntire’s third floor and coming across the work of alumna Susana Juárez Rodriguez (McIntire ’21).

“I was fascinated with the art in the gallery, and when I found out it was a former student, it made me feel appreciated as a student and as an alumnus once I graduate,” he says, noting that in addition to looking forward to starting his professional life as a Consultant, he’s also excited to explore his creative interests such as painting and sewing.

Yet as much as Wondwossen is looking forward to following his creative muse, following graduation, the Information Technology and Marketing concentrator will be headed to the Dallas, TX, where he will put his business skills to use as an Associate Consultant at Microsoft.