Their gifts allow the School to pursue new value-creating initiatives and respond quickly to evolving needs and opportunities, protecting the integrity of the Commerce School’s inimitable education experience for generations of business leaders to come. 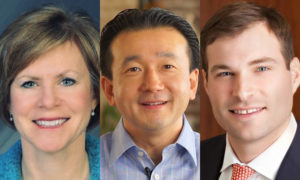 A key component of McIntire’s Inspire the Next Century Campaign, the Century Circle recognizes exceptional alumni and friends who commit to multiyear investments in the McIntire Annual Fund totaling $25,000 or above across five years. By providing crucial funds and a predictable cash flow, their support allows the School to pursue new value-creating initiatives and respond quickly to evolving needs and opportunities, protecting the integrity of the Commerce School’s inimitable education experience for generations of business leaders to come.

Century Circle donors Mary Beth Cardin (M.S. in Accounting ’85), Yang Shim (McIntire ’96), and Ben Slater (McIntire ’05) each cherish various links to the School, but all agree that participation at this significant level offers unparalleled opportunities to further strengthen their already meaningful connections to McIntire and its vision.

Cardin, CFO for PNT Data Corp., says the School played an important role in her life. As the daughter of beloved Commerce faculty member and UVA administrator Ray C. Hunt, she grew up around the University, which eventually led her to pursue her own studies at McIntire. Years later, when her son Robert Tyler Cardin (M.S. in Accounting ’16) attended, she was invited to become a McIntire Cornerstone Society Board member. Cardin’s gift honors her father’s accomplishments and safeguards McIntire’s mission, which she says she sees embodied in the many achievements of students and leadership during annual visits to Grounds.

“My time at McIntire allowed me to pursue many interests in healthcare, data analytics, and business integration and to work on and lead diverse teams,” Cardin says. “I hope that in some small way I can give back so that others have the same opportunities.”

Another notable alum, Shim has been a devoted supporter for the past five years, serving as a board member for McIntire’s Center for Business Analytics. The EY Partner, who has a niece in her second year at UVA and a brother on the faculty of the UVA School of Medicine, says that he and his wife, Lena, think the Century Circle presents an inspiring way to share in producing future business innovators while sustaining his family’s UVA legacy.

Shim believes the rapid pace of transformation in business and technology requires the School to have the necessary funding to quickly adapt and secure its inventive approach. “The Commerce School has been great at focusing on both culture and value creation, and the combination of inclusiveness and innovative thinking will continue to sustain McIntire as one of the top business schools,” he says.

Fellow engaged alum Slater, Director at investment firm Highlander Partners, considers himself lucky to have been a part of the School’s “unique and unparalleled” undergraduate program, where he studied under Dean Carl Zeithaml. Having maintained close ties to faculty, he was moved to become more involved.

“I only hope to do my small share to help McIntire stay on its current incredible trajectory,” Slater says. “I hope to see the School continue to adapt to what will be an ever-changing business environment, to be thoughtful and strategic about what the future holds, and to be unafraid to position itself accordingly.”